SCILLY SEASON: Why we’ll miss Sgt Taylor on the Isles of Scilly Facebook page – The Dan Slee Blog » LOCAL SOCIAL: Is it time for a Local localgovcamp?

Ladies and gentlemen, a period of mourning, please. The internet is over. Switch it off. There’s no more to see.

What has happened? Sgt Colin Taylor has left the Isles of Scilly Police Facebook page.

He has returned to the mainland with his family.

The page, I’m sure will go on, but the man who helped make the page the best public sector social media page has moved on.

If you’ve not come across the page you can find it here.

It is the police Facebook page for the Scilly Islands which can be found off the southern tip of Cornwall.

In numbers, there are less than 3,000 people living on the islands and yet the page drew an audience of more than 50,000. It succeeded quite simply because it was human. Wryly witty and always professional it was clear there was a human behind it. This was why it succeeded.

I have two hopes. Firstly, that whoever takes it on continues in the same spirit but isn’t overawed. And secondly, that Sgt Taylor continues to use social media for his next role in the police. He is worth 500 community police officers.

If you’ve not come across him, he’s also on Twitter here.

This nisn’t messing about on the internet. This is being human and educational so when support is needed, as Sgt Taylor, has said, he could police the island with 50,000 helpers.

The one when they crowd-sourced the Running Man video

People will look back at 2016 and wonder where there were so many meme videos of police dancing to an obscure dance track.

What started as a joke by one police force spread around the world and when New Zealand bobbies nominated Scilly Police the team there is an example of perfect community engagement crowdsourced support. You can see the video on Facebook here.

The one with the ball bearing gun

Did you know the law about guns? I didn’t until I read an account of a conversation with a visitor to the island. 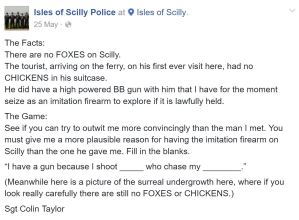 The one with the lost property

Ever wondered what happens when cuddly toys go missing? They put out witness appeals. 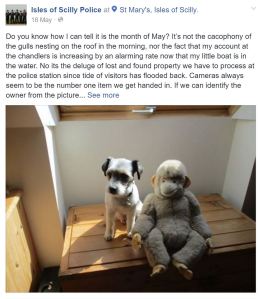 The one with the picture of the harbour

Some places are jst lovely to look at and the Scilly Isles are one of them. So, an operation to fight crime in the harbour has to have an image of the place, doesn’t it? 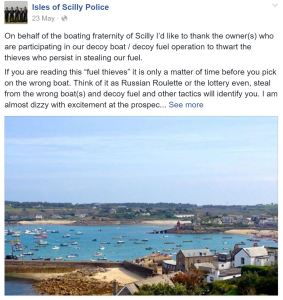 The one where Welsh football fans are reminded where to tinkle

Everyone loves a happy football supporter. But the problem of tinkling revellers is an issue to tackle on Facebook with a gentle reminder. 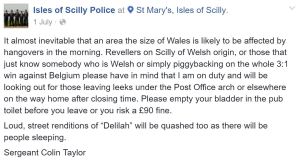 There’s a downside when they move on, sure. Morgan Bowers’ much-missed @walsallwildlife Twitter went from the web when she left Walsall Council. But the fact that there is a hole when people move on shows just what a good job they do. Online and offline.