Time for a cross-city (& beyond) series of shared problem solving workshops and/or an extended hackweekend?

Some of you may have seen the news reports of the 8am protests that closed some of the main roads into Cambridge City Centre. My playlist of videos is below:

Over 100 people up and about for a protest so early in the morning on a weekday reflects the strength of feeling in some quarters. But it’s not all plain sailing for those who are now calling for the scrapping of the City Deal – whether specific scheme or in its entirety. With more and more people having their say, and the programme now becoming more complex, we’re now at the stage where the protestors have their own critics. Here’s local blogger and cycling campaigner Cab Davidson.

“Truth be told the protestors have no alternative suggestions and don’t have evidence against the current plans. There’s talk of setting up a traders lobby group against them (but not, apparently, FOR anything else), and councillors are saying ‘we’re listening’. So the NIMBYs win this round”

My take has been that the four main shortcomings of the city deal systems, structures and processes are as follows:

I mentioned the lack of historical context in a previous post. Here are some old maps from ‘The Cambridge that never was’ by Reeve from the Oleander Press, 1976 that I scanned.

Why were Professor Holford’s plans for a big road ploughing through Christ’s Pieces not actioned below?

Or the Cambridge Monorail idea of 2009? Or perhaps the Underground bus tunnel?

Irrespective of what you think of those plans, collectively the Greater Cambridge City Deal needs to explain what the other previous plans were in summary form (with links to electronic copies of the full reports). That way, those who have been around local government for a long time don’t end up being the sole repositories of why things didn’t happen – and also don’t get needlessly annoyed by those of us who suggest things long since discarded – like electric trams! 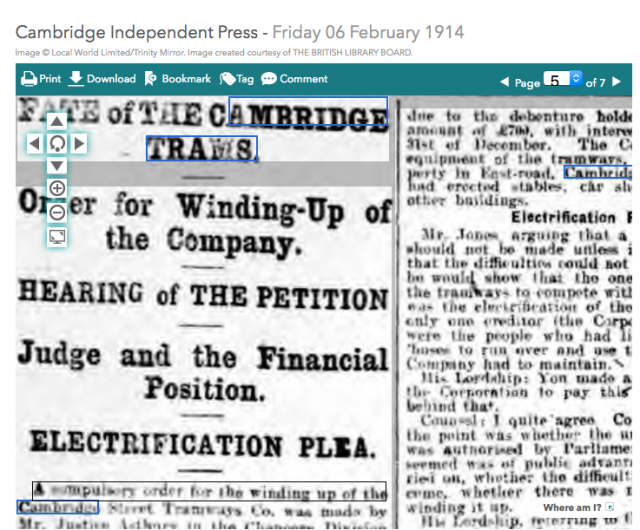 Competition from diesel buses meant the old horse-drawn tram company started losing money hand over fist. Despite having powers from Parliament to convert to electric trams, and having plans to expand the tram network, the council chose to wind up the company just before the outbreak of the First World War.

One of the biggest criticisms of the city deal processes has been on the lack of a substantial evidence base to inform decision-making processes. The Smarter Cambridge Transport campaign has been persistent in its call to strengthen evidence bases – see paragraph 7 here.

For me, one of the biggest gaps is the lack of data on the journeys our children & young people take to get to school and college. Yet the institutions already hold data to get some generic transport patterns based on the first 3-4 letters of post codes alone. Plotting those onto a map would be incredibly useful – especially when matched up with data on the main mode of transport that children and young people use to get to their places of study. But this does not seem to have been done – even though the plans disproportionately affect young people. We have some of the tools available to do this analysis – such as Cyclestreets.

We also have a wealth of data being collected by Cambridgeshire Insight – is this data being used? If so how? Is CI being publicised by the city deal? Are statistical bases being systematically referenced and referred to in press releases? Are the media publicising these?

We have to move away from the current adversarial relationships where only a small group of ‘experts’ do all of the analysis hidden behind closed doors to one where the city can make full use of the wealth of knowledge and expertise that it has in order to inform decision making. We piloted the process with Be The Change Cambridge in 2014/15 and the concept worked. Ditto with hack days such as this one from the Cambridge Cycling Campaign or this one from Culture Hack East in 2012 which provided valuable new insights into our leisure facilities in Cambridge. We have done this before, we can do it again – if the institutions want it.

Why oh why oh why do institutions in Cambridge have such a problem with asking young people about their opinions and ideas on solving Cambridge’s persistent and chronic problems that they have first hand experience of? It’s not hard. Two examples from this year.

And I’m not paid to do these interviews!

One of the consistent themes from protesters was that they felt they had only found out at the last minute about the proposals from the city deal. Over the past few months a number of people have been working their socks off to inform people about the city deal – I’ve been following their social media feeds of them out and about in their communities.

As I’ve stated before, Cambridge has a structural problem about how we as a city communicate with each other. The problem isn’t a lack of effort, but rather we’ve got something badly wrong about communicating with our citizens and with feedback loops influencing policy and decisions.

It can be rescued from the avoidable hole it is currently in. From my perspective it’s frustrating to see the situation as it is because I’ve been following the meetings and processes, filming and interviewing various people involved for nearly 2 years. I’ve also regularly tabled public questions.

The Smarter Cambridge Transport’s plan is here. There is also an event coming up: 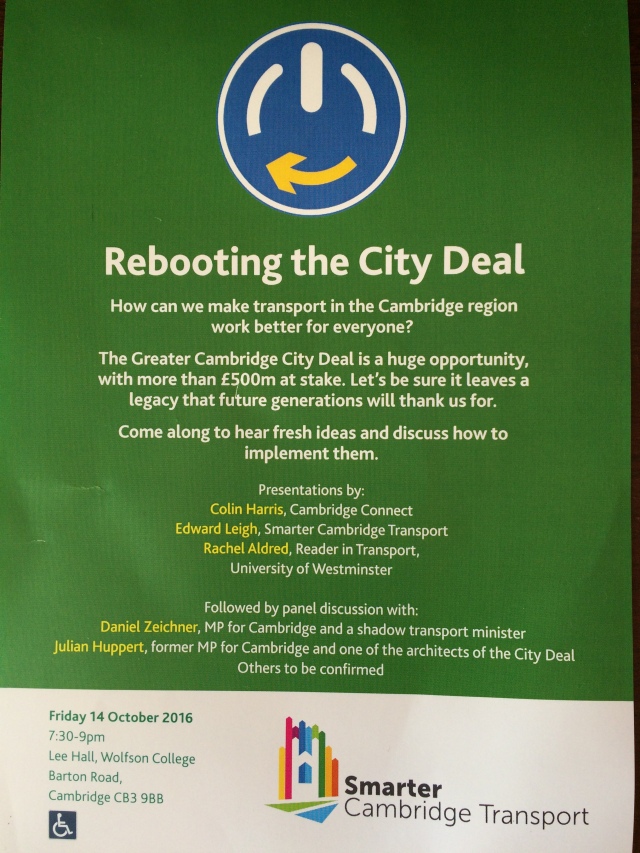 Here’s hoping we can reboot it and come up with something that has people working together to solve our city’s persistent and chronic transport problems.