As this year marks a ’round’ anniversary for both of these awards, I thought it worth a post (and am hoping to encourage someone with a closer connection to the process will write something for the Libraries Taskforce too!). This annual event (full details of all books featured, on this link) is always a pure celebration of books for children – and a means of thanking authors, publishers, teachers, librarians and of course, the children for whom all this material is produced.

The event this year was held in the gorgeous art deco surroundings of RIBA, on Portland Place. Before the official award ceremony, there was the opportunity to mingle with authors and illustrators (many of whom were pleased to sign my CKG poster – which is now a very special piece of paper!)

The formal ceremony was expertly compered by Cerrie Burnell, familiar to lots of the children in the room (and parents). We were also treated to a song and poem from the wonderful voice of Amy Leon.

On to the awards – and first was the Amnesty-CILIP Honour – which is decided from among the 8 books on each shortlist. This year both winners were very topical: first, the Italian author and illustrator Francesca Sanna’s The Journey – which tells of a refugee family and their flight to find safety. She talked movingly about how this issue was real for her – especially as there have been so many refugees crossing the Mediterranean and landing in Italy. 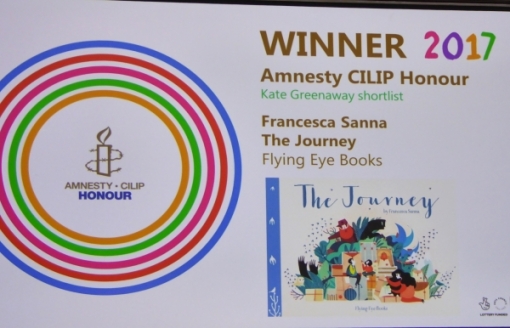 And next was The Bone Sparrow by Zana Fraillon. Zana is from Australia and her story tells of life in a detention camp. As she said “I didn’t start out wanting to write a story with a message, I wanted to tell the stories that haven’t been told.”

Each of these awards was followed by a short film of children talking about the books, and what they meant to them – both were very moving and emphasised how they were the audience that really mattered.

The next award was the Kate Greenaway medal – which celebrates illustration in children’s books. The winner in the award’s 60th year was There is a Tribe of Kids illustrated and written by Lane Smith. This American writer and illustrator made everyone laugh when he talked about how his career started – and when he realised that many of the illustrators he most looked up to were British. 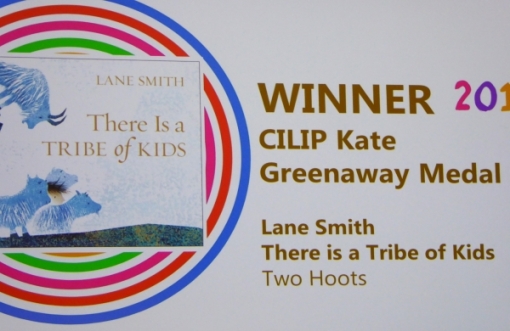 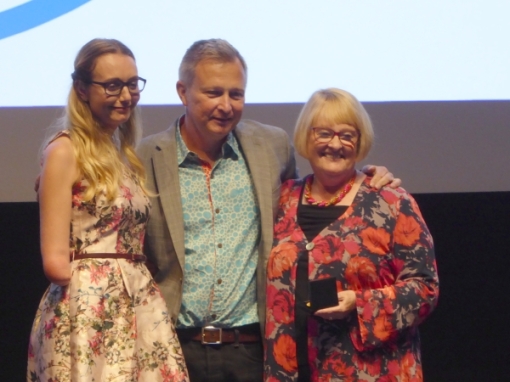 Lane with Cerrie, and the award judges chair: Tricia Adams

Finally, we came to the last award, the Carnegie medal, awarded to the writer of an outstanding book written in English for children and young people. The shortlist contained some fascinating titles (I’d like to read most of them), and the award went to: Salt to the Sea by Ruta Sepetys. Her story is based on a historical event that is now almost unknown: the German ship the Wilhelm Gustloff was sunk in 1945, with the loss of 9,000 lives – more than the Titanic and the Lusitania combined. Ruta is herself the daughter of a Lithuanian refugee, and talked with feeling about how history always makes sure we know the names of the villains,  but we seldom know the names of the victims. It is through stories that we can find out how things were (or are) for people, and this message was also summed up by Tricia Adams, the chair of the judges: “The books that have triumphed demonstrate the vitally important role literature and illustration play in helping children and young people to understand the world around them, be that through a historical lens or through the natural world around them.” 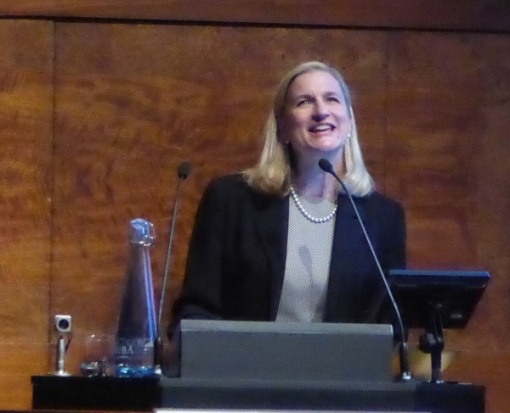 My post is really just a photo essay. Others have reported the awards: the Guardian has an article too (with a much clearer photo of the winners!) and the Bookseller also published a piece. Finally, as mentioned at the start, for all the background and full information about all the books on the shortlists – take a browse through the main website.