Last week we held a Science, Technology, Engineering and Maths (STEM) event for pupils from two local secondary schools, at our digital hub in Newcastle. 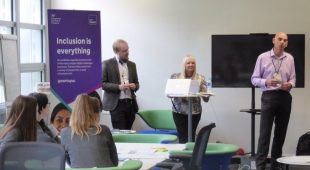 The aim of the day – which was held in partnership with MyKindaFuture and Capgemini  – was to help change young people’s perceptions about working in technology, and encourage them to think about the opportunities unlocked by studying STEM subjects. These subjects are so important because they touch every aspect of our lives, including the services we deliver for the public.

Keith Dickson, Head of Universal Credit Live Service Digital Delivery, opened the event by asking for a show of hands from pupils who were interested in working in the digital sector in future. With only two raised hands out of 24, we knew we had our work cut out! 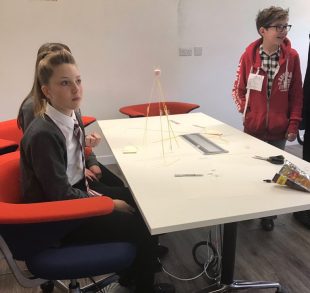 Joe Harvey, one of our scrum-masters, ran one of the day’s hands-on sessions – the marshmallow challenge. It involved the pupils working as a team to construct the tallest freestanding structure using only spaghetti, tape, string and a single marshmallow.

Joe explained, “The challenge gives a great introduction to agile principles – which is one of the ways we develop our digital services in DWP. It shows how working in a team to approach a problem with limited materials and with limited time encourages innovation, creativity, collaboration and the value of early prototyping.

“It was so interesting to see how the children (and teachers!) went through a full spectrum of emotions during this exercise – from failure to competiveness – and we ended up with some really inventive creations.”

Not all tech is coding 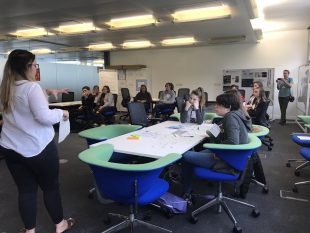 The session in full swing

Then it was onto a session with James Peart, another of our scrum-masters, which aimed to show the broad range of different roles available in digital technology and prove that it’s not just all about coding.

James said, “I spent some time introducing the different roles in a delivery team from user research to product management, and tasked the pupils with creating paper hats and boats.  The most fascinating part was watching the difference in the ways the boys and girls worked, which proved to me the importance of diversity on digital teams – something we’re really passionate about here in DWP Digital.” 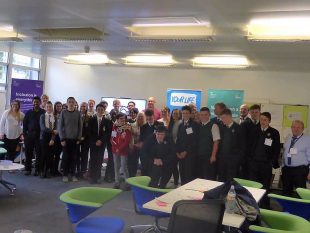 I’m so happy with the way the day went.  The pupils were really enthusiastic and engaged with both of the tasks.  And they were genuinely interested in the career options available both in the digital sector and the Civil Service.

Phil Partington, a teacher from Joseph Swan Academy in Gateshead said, “We really enjoyed the active and engaging sessions in a ‘real world’ workplace.  The pupils developed work-related and employability skills as well as exploring the range of careers available involving tech!”

Linda Crouch, a teacher from Berwick Academy in Northumberland added, “It’s been great to see our students enjoy the activities – they were really competitive during the sessions! And I’ve found out a lot about the apprenticeship opportunities in the region.”

At the end of the day, when we asked again who was interested in a digital career, pretty much everyone in the room put up their hand. And what’s really heart-warming is that lots of new friendships between the two schools were formed that day.

Feedback from one of the pupils summed it all up for me, by saying “Today I’ve learned that STEM subjects are essential in jobs and are very important for my future.”

Studying STEM subjects is indeed important as they help the future generation solve tomorrow’s problems. I think it’s fantastic that we’ve got this opportunity to open these students’ eyes to career paths they might not have ordinarily considered.  And I’m delighted that we’ve been invited to one of the school’s careers fayres later this month to promote digital career options to the rest of the school.