AUNTIE SOCIAL: Why the BBC should be your new favourite corporate account – The Dan Slee Blog » LOCAL SOCIAL: Is it time for a Local localgovcamp?

I’ve often said that the secret to decent digital communications in being human.

What is being human? You recognise it when you see it. It can be sharp and witty. It’s not corporate speak and its not jargon.

Often when I’m training I’ll see a look of anguish on people’s faces. They’d like to be human. But they’re worried about what people would think.

Step forward, the @bbcpress Twitter which has been on fire of late. But rather than be a branch of the entertainment industry the account skilfully switches between the humorous to the rebuttal to the more measured. But that’s fine. Choosing which is what makes the account special and why it should be your new favourite corporate account.

If the BBC can you can

Often, people will be reluctant to be human because they are risk averse. That’s fine. The BBC has been a political football for decades. If they can you can.

There’s a great scene where Alan Partridge tries to attract someone he knows from a distance away. It’s painful. So, the teaser is marvellous.

There was a running gag in Alan Partidge’s first series about wanting a second series. Badly. Really badly. So desperately, you could smell it. So, of course an Alan Partridge meme to announce a new series is the way to go.

The BBC have become bold at shooting down misinformation online.

The League of Gentleman announcement

A simple announcement wouldn’t have chimed quite so well as this that chimed with their dedicated fans. 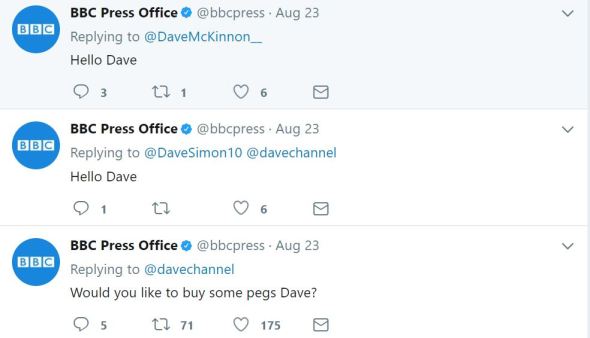 And the more formal announcement

The decision to expand World Service was treated to a more straight bat. But that’s fine.

The measured tribute But it is not all fun and games. When the mood is sombre @bbcpress find the right gear too.

All this is content that for local government digital media pioneer Alastair Smith and the rest of the BBC Press Office team can share pride in. Good work well delivered in sometimes difficult circumstances.