STRESSED: What the CIPR survey says about public sector comms – The Dan Slee Blog » LOCAL SOCIAL: Is it time for a Local localgovcamp?

Have you seen the meme doing the rounds about journalism?

It runs: “Journalism it’s a tough job with insane pressure and pretty crappy pay. But on the other hand, everyone hates you.”

Thinking of public sector communicators, its a line I thought of when I read the CIPR State of the Profession report. This is a remarkably fine document that maps where the profession is in.

In the public sector, its a tough job being a communicator with insane pressure with okay pay and if you read the Daily Mail you’d everyone hates you.

Across the profession as a whole, two thirds are women and a third men with the median income £30,000 pa.

Almost one in four public sector comms people have been forced to take sick leave because of stress, anxiety or depression, the report says. That’s almost double the national average.

In addition, public sector comms is also the second most stressed sector behind consultancy and agency work.

But the report also says that 73 per cent of the public sector have a policy in place to deal with the issue which far outranks other sectors.

What strikes me talking to public sector communicators is that stress on its own is rarely mentioned. But the factors behind the stress are. A lack of resources. A lack of respect. Those two issues shine through.

When I’m training I tend to see a sea of female faces. The LGComms Future Leaders intake are overwhelmingly female, for example. But the survey has a slight majority of men over women.

But the study says that across the profession, there is a £5,000 pay gap between men and lesser-paid women and the top jobs are more taken by men.

Are other across the board issues an issue for the public sector?

Across the profession as a whole a series of additional issues are raised.

Are they issues in the public sector? Hard to say.

An issue with a battalion of Public Schoolboys trying to communicate with working class communities isn’t one I’ve come across. I think the issue of a lack of ethnic minorities probably is.

Comms is an ageing profession

One thing that did come through from the survey was just how few younger people there are in communications. This can’t be healthy.

Just four per cent of comms and PR people are under 24 when more than 30 per cent are in the UK.  Tacked together with the fact that almost 60 per cent have been in the profession for more than nine years it makes me question if the profession has the life skills to communicate to younger people.

The public sector is the largest sector

What is fascinating is that the public sector is the largest sector outside of London everywhere apart from the East Midlands. I’m not sure this is always reflected in the CIPR whose work I increasingly admire. But this lack of obvious voice in the CIPR is perhaps explained by organisations like GCS whose role covers raising standards and makes noise for the public sector.

Besides, if people are busy being stressed they may not have time to campaign on issues. 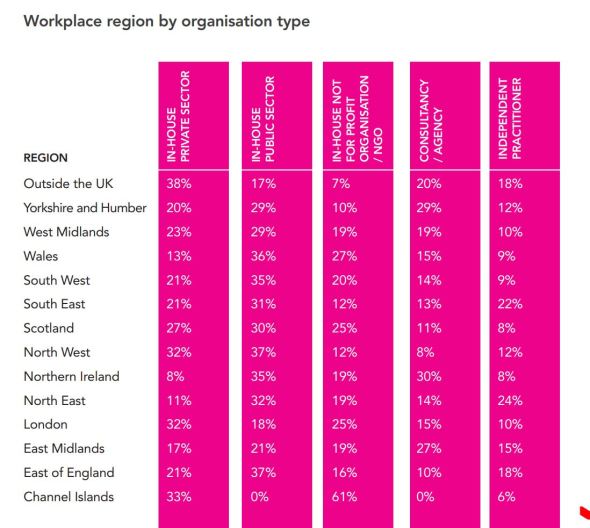 Public sector communicators are the bedrock of the industry in the UK. But this  remains stressful and pressurised work.