Four years ago the idea of making short video with a mobile phone was radical and daring.

Now, the skill has become mainstream and the work that comms people are doing day-to-day serves to inspire.

Always take inspiration from where you can. The charity video or the BBC News package are just as helpful to you as what your neighbouring council, trust, force or service have done.

Chris is a senior copper with West Midlands Police. He has motor neurone disease.

He tells the story of his family and how he was diagnosed with the life-limiting illness.

“I refuse to be defined by it,” he says.

Policemen are supposed to be hard cases who charge at where the trouble yet Chris opens up a side of vulnerability. It couldn’t have been easy to make but it does its task of informing and reassuring.  His purpose is to tell people about motor neurone disease and tell people who have a condition that their employers can help. You can watch it here.

What you can take: A vulnerable human story bravely told.

A video that shows emergency work

In Wainfleet, Lincolnshire hundreds of homes were flooded.

The situation was an emergency and a number of public sector people communicated in real-time the latest updates. This helicopter winching sandbags into place to help repair a burst river is excellent and timely footage that re-assures.  The original is here.

What you can take: in an emergency what’s going on around you is the story. Point. Film. Post.

A farmer shows how not to be attacked by cows

I’ve seen this video in a few places but I’m pointing you towards the version that was posted to the Farmers Guardian Facebook page.

A farmer gives a quick run down on how to walk through a field without having cows amble towards you.

Don’t run. Walk. If you run you’ll look exciting and cows may run after you, he says, and demonstrates it.

Points off for being portrait rather than landscape and having horrid black borders but overall a solid A for showing what you can do with a smartphone plus a fine idea. You can watch it here.

What you can take: A smartphone with no editing can tall a story if the narrative is simple and the subject is interesting,

A video that is an appeal for singers

The standard appeal is a three par press release.

Budding X have been urged to Y at Z.

As words go, it’s not that exciting.

So, an appeal for members of a choir to shoot a video is a lovely way of making a appeal.

They put across their welcome with one leading member and you can hear them singing.

You can watch the video here.

What you can take: Go to where the people are.

A video that uses hyperlapse to show rubbish picking

Rubbish is a problem across the country and Horsham Council are hard at it.

They use hyperlapse video, captions and fast paced music to help tell this story that’s visually engaging and keeps you watching.   You can see the original here. Love how they use unobtrusive corporate branding in the corner so you can see who is serving the clip.

What you can take: images and text on the screen can put across a point of view.

A video that is a lovely template for story telling

We know that stories are one of the most effective ways of communicating but often that goes out of the window.

So, while this is a BBC video, there are lessons here for anyone looking to shoot video.

The story is that the inhabitants of the Scottish island of Eriskay play football on one of the most remote pitches anywhere in the world. There’s a hill in one corner, a slope and plenty of wind.

“The pitch is recognised by FIFA,” one player “If you can’t play football on a wee bumpy pitch you shouldn’t be playing.”

The video captures shots of the quirky nature of island life and cuts in soundbites with the players. It’s lovely. I want to go. You can watch it here.

What you can take: Look at this to understand how a film works. The interviews are a thread through the film and the footage illustrates the words. 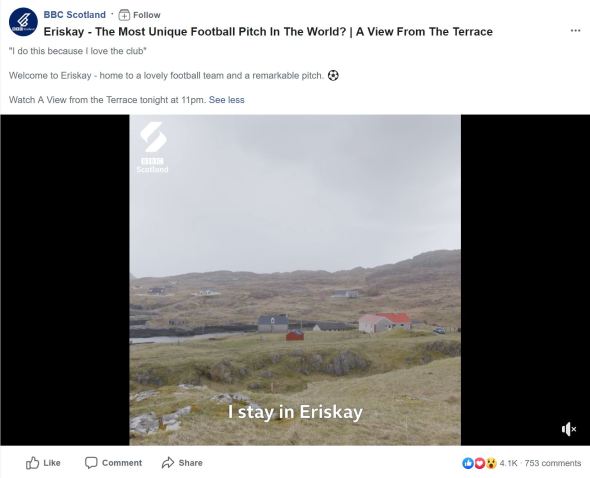 A video that shows the summer solstice live

Stonehenge is an amazing place. Built of stone dragged from hundreds of miles away the location is as imposing as it is mysterious. The stones are huge but no-one knows their purpose.

English Heritage used Facebook Live for a static live feed with the camera pointed at the stones as the sun rose on the longest day.

This year the live broadcast put the landscape and the horizon at the core of the viewing and 45,000 watched it. In previous years they’ve been in amongst the stones and the Pagan celebrants. The comments were split between abuse of the ‘lazy hippies’ gathered singing songs and those who thought it was great.

This year there was less engagement and more of a visual spectacle. You can watch it all here.

What you can take: Where the value is being at that spot at that moment in time go live.