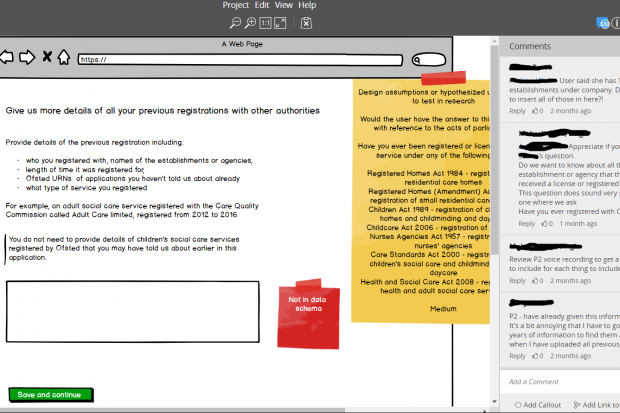 This form has recently been revised (and the service renamed Apply to register a children’s social care service), but even after undergoing major improvement it was still 120 pages long with complex routing.

Simplifying this form was challenging. There are six distinct types of user who might use it, and each of these users can apply either as an individual, an organisation or a partnership, meaning that in total there are 18 different journeys a user could potentially take through the forms.

This complexity posed a real challenge when deciding how to take notes during the remote usability testing sessions and conduct the subsequent analysis.

We are a team based across Ofsted’s Manchester and London offices, so traditional note taking and affinity sorting with sticky notes was not possible. (Sticking up 120 A4 pages of screens would have been a particularly unenviable task.) As we also needed two screens and somewhere quiet to conduct the sessions, we decided to work from our respective home offices.

Previously when we have conducted user research on shorter registration forms we used screenshots of each page of the form and placed it into a Google document or spreadsheet. We then used the comments function to insert raw data. These comments were then used to conduct affinity sorting.

As this form was particularly long, with users often jumping between questions, going from, say, question 45 to question 61, keeping up would have been difficult to do in a Google document.

The content designer on our team, Mukesh Singh, with support from an interaction designer, used a prototyping tool (Balsamiq) to create wireframes of the service start page, all the pages in the transactional service, and the email confirmations. They then invited subject matter experts (SMEs) and other designers to pair-edit the wireframes.

As both the content and design were in one place, they used the sticky notes feature in the prototyping tool to share the design assumptions they had made as well as their user needs hypotheses. These helped greatly when planning the research sessions.

To help us take a more collaborative and holistic approach to recording and analysing research findings, we decided to record data from the usability testing tasks directly into the prototyping tool. This also allowed us to conduct affinity sorting within the tool. To make life easier, we ensured that page numbers were left on the prototype (discreetly) so that it would be easier for note takers to move to the correct page in the prototyping tool and take notes in the comments boxes. 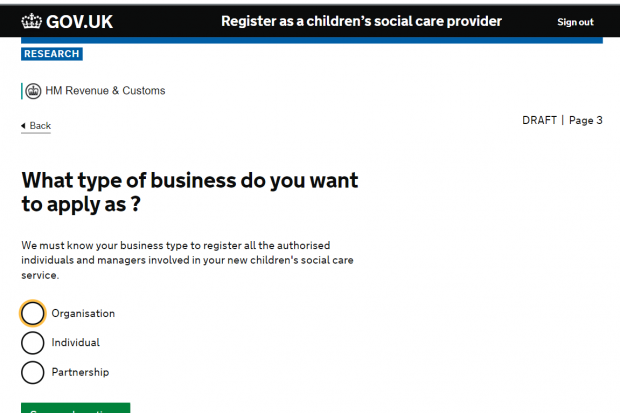 Strengths of this approach

Limitations of this approach

We gathered over 60 insights from this round of research, and made around 50 content and design changes to the prototype.

As a team we felt using a prototyping tool helped us to meet our user needs in several ways. It empowered us to holistically plan and edit the design and content in every step of the user journey, and having all the content, design and user research feedback in one place allowed us to compare the content and design, optimise it for consistency, and act quickly on our research findings.

For us, the prototyping tool was a truly versatile, user-focused design tool that we will be using in user research again, especially when our registration forms are so complex.

Have you used a prototyping tool to record research data or analyse research? Let us know in the comments.