Inside the box: an exercise in service thinking – dxw digital

A few weeks ago, we ran a workshop with North Lincolnshire council’s senior leaders to play back our findings from their digital maturity assessment.

There was a lot of information to share with them, but we wanted to ensure that we included an activity to get senior leadership thinking about possible ideas for an exemplar project to help them quickly deliver something tangible for users. A digital project exemplar would also be a useful platform for teams to develop their digital capabilities.

After running through the findings and recommendations, we talked about what makes an exemplar project. Our definition of an exemplar was a service that covers our 11 aspects of digital maturity and their focus on developing empowered multidisciplinary teams.

We used a ‘service in a box’ exercise as an engaging activity to get teams thinking about exemplar ideas for the council. 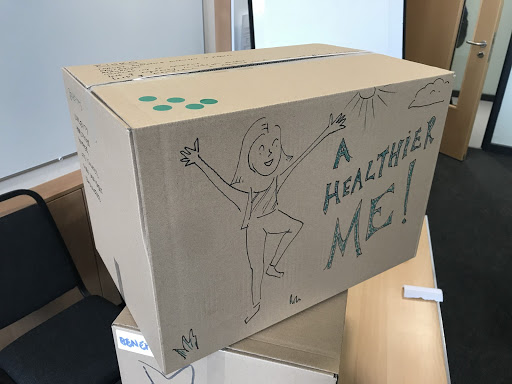 One of our boxes

What is a service in a box?

Service in a box is a tool that helps people think about the different aspects of a project or idea. It asks teams to consider their service as a product on the shelf that they want people to pick up and buy. We started off using a template from Stormz agency that considered 4 areas: 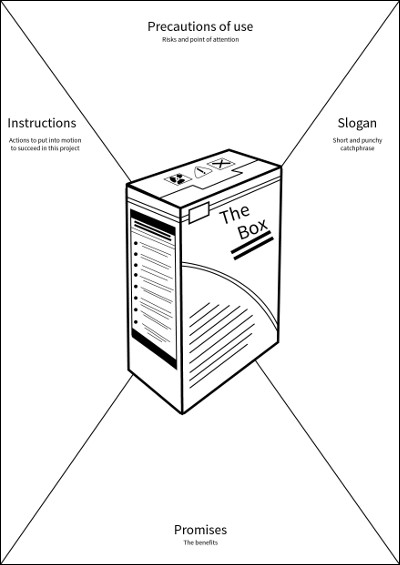 The original 4 box sides – precautions of use, slogan, promises, instructions

After using the tool, we added another side of our own:

5. The bottom of the box: ingredients. What does the structure of the team need to look like to do this? What skills are needed? Does the organisation need external support? Funding? Sign off?

How we ran the exercise

We ran a few workshops with service managers at the council where we captured some initial ideas for new or improved services. We brought these outputs along so that it wasn’t a “cold” start for the group, but we expected senior leadership to have some of their own ideas as well.

We also brought along empathy maps to give the senior leadership team an idea of the different people they were providing services for. The maps had also been created by the service managers and represented the perspectives of users of a range of different services from waste disposal to school meals to social care (from the council’s point of view).

We split the group into teams of 3-4 and asked them to either choose from the empathy maps/ideas we had brought with us or if they had their own idea, to make their own empathy map as a starting point.

Teams were given 10 minutes to discuss possible ideas and to get their heads around the ‘service in a box’ exercise. We then had 30 minutes to break that idea into the 4 sections described earlier. We gave them physical boxes to work on; partly so that there was something tangible at the end, but also to make it fun (when else do you get a chance to draw all over a box at work?).

Each team had a set of materials to create their box:

We then asked each group to present (or sell) their box back to the group within a 3-minute time span. 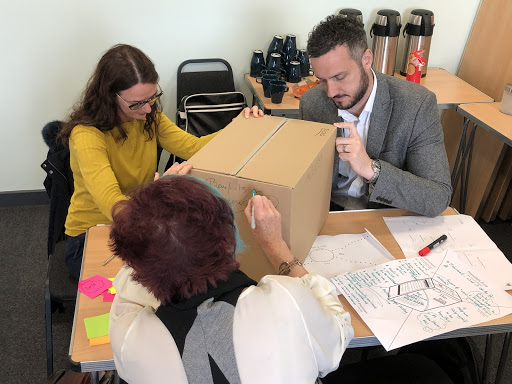 Some of North Lincolnshire’s senior leaders working on their box

The exercise worked really well. All of the teams were engaged and it gave them a chance to think about some exemplar projects that would provide benefits for residents and the council. Across the 4 groups, we explored ideas about health and wellbeing, HR, comms and waste management. It also provided an opportunity to think about fresh approaches to problems the council faced.

What we learned about running this exercise: 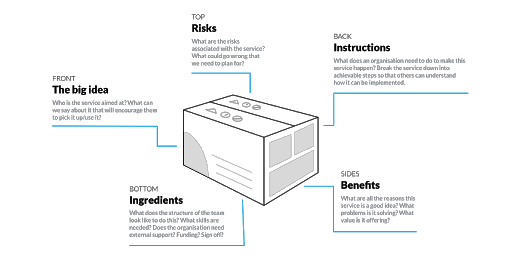 What we’d do differently next time:

If you’d like to find out more about this and other tools and techniques we use, please get in touch.

The post Inside the box: an exercise in service thinking appeared first on dxw digital.