Eight Years On From GDS … – In The Eye Of The Storm

… and what have we accomplished?

I wrote about Martha Lane Fox’s report on the future of e-government (shortly thereafter to become digital government, though Martha referred to it all as "government online services") in November 2010.  The recommendations were not particularly knew but they were tightly focused and provided the impetus to set up GDS and give it a power that had previously not been available to either a Cabinet Office technology-led function or, I think, any other cross-government technology-led team.

Handily, the EU have published their "Digital Economy and Society Index 2019", and there’s a specific report on the UK.  Perhaps the last one of these that we will see.  The upside of that is that we may be top of the table in the next one that we self-publish, if only because it will be a table of one.

What, then, have we accomplished?  I’m afraid it doesn’t make for good reading. 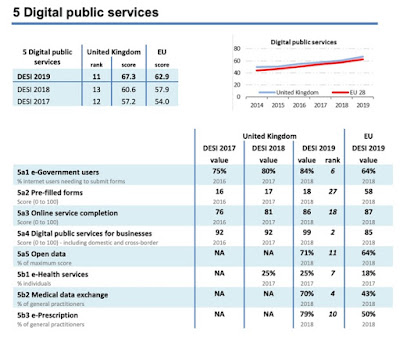 It gets worse.  We are 18th for online service completion and a woeful 27th for pre-filled forms.  Put to one side the idea that "forms" are still the vernacular more than 20 years after we started down the online path.

Our best ranking, by far, is "digital public services for businesses" – I may be biased but I would put that down to the original work by HMRC as far back as 2001 followed up by good work by Companies House (which chose to do things their own way but nevertheless did a very good job – far above average one might say).

Estonia I hear you cry.

Would be a good guess.  They’re 2nd.  Finland is first.

There are some lessons to learn here.  Trouble is we just never seem to learn them.