The Verify Delusion – In The Eye Of The Storm

Verify, the self-declared "new way for you to prove who you are online, so you can use government services safely", seemingly crossed 4m users in April, and has since (as of 2/8/19) climbed to nearly 4.7m. 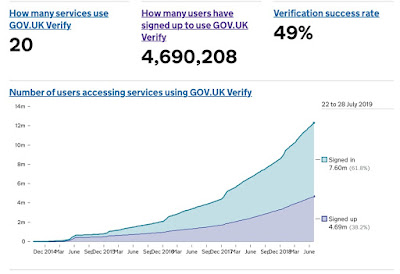 We know little, though, about who is using the "20" available services or what they are doing with them.
We do know, for instance, that Self Assessment returns are still filed, in the majority, by users with a Government Gateway ID.   The recent NAO report says that only 4% of HMRC’s users route through Verify.  Verify was supposed to work for everyone, including businesses … but that plan was abandoned, first accidentally and then on purpose.  Gradually then suddenly as I believe Hemingway first said.
We also know that some of the services claimed to be using Verify really aren’t – Defra’s RPA (payments to farmers through an EU scheme) tried to use it, but the experiment failed; stories of problems with Universal Credit’s failed attempts to make Verify work usefully are rife.  More than half of the services can be accessed through other routes, including the Gateway.
We also know – it’s up there in the top right hand corner of the image above – that the success rate is only 49%.  That means, in theory, that more than 9m people have tried to use Verify and as many have failed who have succeeded.  That doesn’t come for free … it’s £20 to sign someone up and £10, I hear, per login thereafter.
£10 per login.  The dashboard, where the graph above comes from, says that 42,000 users are creating IDs each week and 70,000 users are logging (again, we don’t know what they are doing.  Maybe they are seeing if they can do anything with their shiny "new" Verify ID.  One assumes that 42,000 create the ID and login to see if it works and perhaps the other 28,000 are coming back).  That’s £420k/week for new IDs and £700k/week for logins.  More than £1.1m/week.   £57m a year.  Plus costs of operation.
Even with revenues at those levels, it’s not clear if the diminishing number of Identity Providers (IDPs) will stick this out given the "planned" move to the private sector in March 2020.  Some may drop out before then.  Millions of users will have to create new identities, if they see Verify as useful.  Of course, those new IDs won’t be free either.
The same NAO report referenced earlier stated that costs were expected to be £212m (far, far away from the original "we can do this for £25m and save hundreds of millions") with benefits of £873m; the latter has now been revised down to less than £300m (and that number is doubtless falling given the bulk of it is not direct benefits but a made up calculation of "spend avoidance").  Some 38% of those costs went to the IDPs.  They haven’t, on the face of it, done badly, but we don’t know the investment they made, or the ongoing costs they incur, nor do we know what their original expectations were in terms of cost and return.
Failed project? Check.  Top 10 reasons for failure fulfilled? Check.  Sunk cost fallacy?  Check. Deluded? Check.
What happens now?  Does it go to the private sector?  If you ran a business, would you take on a service that fails to fulfil the user need of half of the people who use it?