UK Oil Refineries, Brexit … and Electric Vehicles – In The Eye Of The Storm

Reports in the last couple of days have said that some UK oil refineries could close, at least temporarily, and perhaps permanently if a hard Brexit meant that oil-based products were important tariff free (all the more so given that exports from those refineries would have tariffs imposed).  This is because the government has announced, though doubtless subject to change, that the tariff would be reduced to zero; exports would likely have a tariff of just under 5%.

According to an MSN report, the 6 refineries currently operating produce about 400,000 barrels a day of gas, and export about 30% of it.  Commentators speculate that cost reductions would be brought in and that any closures would be short term.
There is, though, a bigger problem.  According to the UKPIA (Petroleum Industry Association), the downstream oil industry is important to the UK:

The sector contributed £7.7 billion directly to UK GDP in 2016 and supported directly and indirectly 300,000 jobs, as well as enabling all other key sectors of the economy – from chemicals and other manufacturing to almost all transport-related business – to grow.

and that’s backed up by this picture: 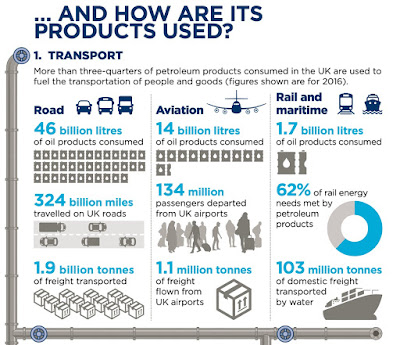 46 billion litres of oil products consumed by road vehicles (taking the picture literally, cars, buses and vans/lorries, both petrol and diesel).  A further 7.2 billion litres of oil were used to manufacture petrochemicals that then find their way into all kinds of things – clothes, electronics, paints, tyres and so on.
The thing is that these refineries produce lots of products, but many are side effects from their scale business – that is, refining products to be used as vehicle fuel.  As the move to EV gathers, ahem, steam, it’s easy to see that there is a loss of that scale, which will mean that the other products are either produced less cost effectively or, perhaps, not cost effectively at all.
It’s hard to see when this change takes effect, and it will likely be just the way Hemingway went bankrupt – gradually then suddenly – but it’s coming soon.  Some of those 300,000 jobs … and perhaps quite a lot of them are going to go away.  A strategy would be good methinks.