What If You Could Trade Projects? – In The Eye Of The Storm

Projects that were thought to be doing well would increase in value, projects that looked like they would (or were going to) fail would trade lower.  Third parties would do analysis and release their views which would affect the market value.  Those involved in the projects would release counter-information and, one imagines, become more transparent to ensure that the value of their project remained high.
Here’s an example of how third party information, released by Muddy Waters (an independent research company, usually associated with shorting stocks), can affect a stock.  This is a company called Burford Capital. 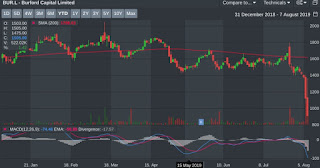 Muddy Waters released info this morning saying that the company isn’t reporting its results correctly, the company counters with its view, including that it has clean audits for the last few years … and the market decides.  In this case, it marked the stock down 50%.
If this market was in place for projects, potential team members would want to work on projects that had high values and good prospects. Maybe they would invest financially in their own project, recognising the potential for insider trading, in the hope of realising a profit if it was successful.
The trouble, of course, is that if as few projects succeed as the Standish Group reports suggest, nearly all projects would trade at less then par.  Maybe all projects would trade negatively, on the basis that picking winners would be too difficult.  If this was live now, and you were looking at a choice of job offers from the Emergency Services Network and Verify, would you choose either of them, or go and start your own company instead?  Or would you take on a difficult project, knowing that everyone thought it was going to fail, because you thought you could make a difference, and having independent verification of success through the market value would increase your own value to future projects?
But what if the very transparency that this brought about resulted in more projects being successful? If your project is thought to be a failure, you don’t attract good people – so you’re incentivised to get the right people on board early, so that there is a good chance of success, and so you get to attract more people.
Sure, some projects would try and sandbag the market by releasing overly optimistic views of their prospects … but that’s how markets work … some people believe that news, others don’t and the market establishes a price. When new views come out, just as with Burford, the market value is re-evaluated.  Maybe it’s right, maybe it’s wrong.  But it’s the most transparent measure we have.