How we created a new service at DataJam 2018 – DWP Digital 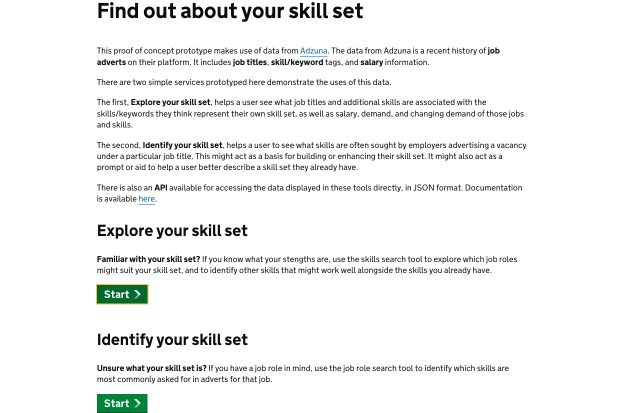 The DataJam North East event last year brought together around 200 people from nearly 50 different organisations for a hack, unconference and workshops.

Data scientists like myself worked alongside service designers like product owners and interaction designers to collaborate on ideas. The aim was to bring data and service design closer together to help solve real problems affecting people in the region.

It was interactive and interesting; I’d never been to an event like it before. I really enjoyed making new connections and working in a different way.

Developing an idea to help close the skills gap

I was working on the Skills theme, as part of one of the Hack teams. We looked at the problem of closing the Skills gap in the North East.

As part of the data sources at the event, we had some data on job adverts aggregated for the region, so we decided one way to close the skills gap was to establish the demand for skills in the area.

Using that data, we came up with the prototype Skills Recommendation Engine, which allows users to view job titles relevant to their current skills, as well as the average salary, demand and growth statistics for that career.

Improving the concept and scaling it up

We worked hard on the concept during DataJam and our show and tell at the end of the event got good feedback. People thought it was a great idea, so we took that away as motivation to improve it, because DataJam wasn’t about creating ready services, it was about proving a concept.

At DWP, my team’s work looks at the labour market and coming back from DataJam with this idea, it really fit into our agenda.

We realised that by helping people to improve the way they describe their skills and seek out new skills, we potentially could help them find employment and move into better employment too. It could help parents returning to work and people wanting to develop new skills later in their lives. We were all excited about the idea, so we carried on working on it.

We improved the techniques we used from an analytical point of view, we brought in more data which was less aggregated. We also scaled it up to look at the national picture. We also kept on iterating, doing user research and improving the interface. 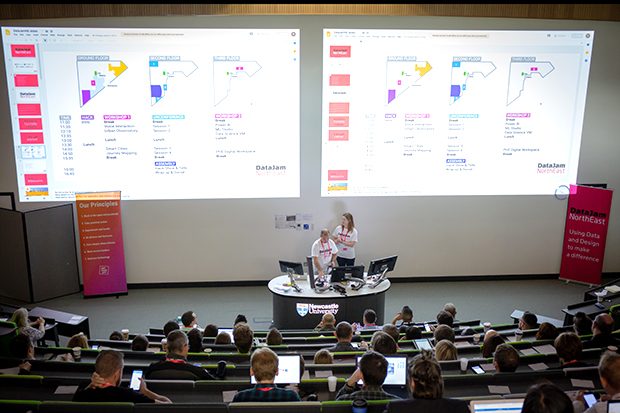 12 months later, the prototype is in the alpha stage of development and the Engine has come a long way since DataJam. We’ve created an application programming interface (API) for it, which could be embedded into other websites to provide skills recommendations. We’re also talking with various people within DWP and organisations across government about how they could potentially use the Engine.

It’s even been used as a case study in the Government Technology Innovation Strategy.

It almost feels unreal that it started off as a concept in that room full of people and noise, coding together and discussing ideas.

Looking back at DataJam

DataJam was the first event I’ve been at where something really tangible could be taken forward afterwards. It wasn’t two days of listening to talks, we actually built something.

DataJam was the first time I worked closely with user researchers, product owners and designers. I really saw the value of their work and how important it is to involve service design into the data we work with.

I think the connection between data and design is growing stronger. Events such as DataJam really help with that because getting people together to use their data and design skills to work on things that matter helps people to collaborate. Those connections grow organically from the ground up.

It’s brilliant to be doing it all again at the second DataJam North East event this month. I’m hoping we’ll work hard, collaborate with even more people and get more outputs like the Skills Recommendation Engine.