This two-part blog series describes a recent collaborative project between Policy Lab and the Department for Transport (DfT) which adopted a tactile and kinaesthetic approach to map the policy consultation process and consider a possible role for data science.

This blog series is for those with a curiosity for how the policy consultation process works and are interested in new ways of running consultations.

This first part outlines the context of the project and describes our design methodology, which included a kinaesthetic mapping approach and prototyping. The second part outlines our findings from the research, in particular the possible role that data science processes can play in the policy consultation process.

The role of consultation in open government

Consulting is a cornerstone of the public policy process in the UK. As of 28 October 2019 there are 4,969 results for open and closed policy consultations on the relevant gov.uk webpage, ranging from the door closure warning time on London Underground trains to legislation on drones. Consultations are an essential ingredient for open government, allowing government to access a wide range of information to improve the quality of decisions reached, and alerting policy makers to issues not picked up through existing evidence or research.

However, anecdotal evidence suggests that the process can be improved. This has already been recognised in the government’s response to the Secondary Legislation Scrutiny Committee, which includes the commitment to “reduce the risk of ‘consultation fatigue’ by making sure we consult only on issues that are genuinely undecided”.

DfT had already developed a consultation tool with data science processes, but this was built for one particular consultation. Our project brief was to develop the existing tool, including data science processes like ‘sentiment analysis’ and ‘topic modelling’, into something that would be available to policy makers across all consultations. We approached this by developing an interactive and tactile mapping process, co-diagnosing the initial challenge with policy makers, and then co-designing solutions with a mix of policy makers and analysts.

Before exploring the potential benefits of data science, we investigated the lived experience of policy makers as they organise, conduct and analyse public consultations. Mapping this process revealed ‘pain points’ where interventions, including data science, could have a significant impact.

This research started with a day-long workshop where DfT policy makers and communication experts shared their perspectives on policy consultations from inside and outside of government. Policy Lab facilitated the co-creation of an initial consultation ‘process map’ and ‘user journey’ using a participatory ‘journey mapping’ technique. 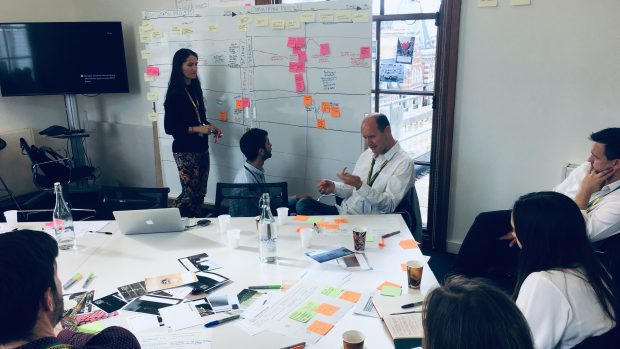 ‘Process map’ of the policy consultation process, created in a participatory workshop

This challenge prompted a creative response from our team: a physical, modular policy consultation map allowing users to adapt and add to the stages identified in the initial workshop. 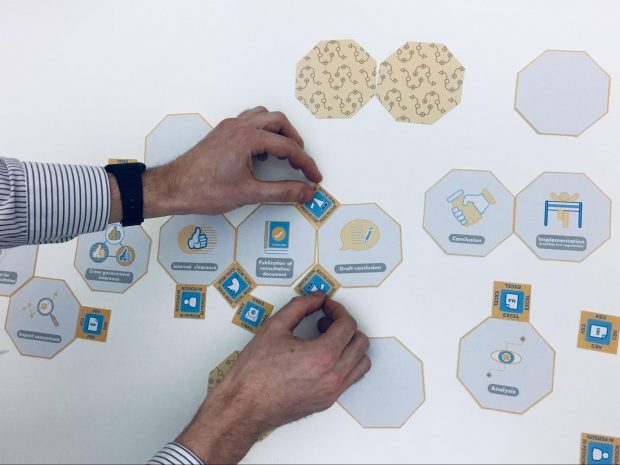 Meaning-making through kinaesthetic learning and touch

Policy Lab has been developing tactile and experiential approaches to problem solving in a number of projects. Becky Miller has previously written about ‘learning-by-doing’ in our work on the Maritime 2050 Strategy, whilst kinaesthetic learning is at the heart of the evidence safari approach we have used on a number of projects, including the future of an ageing population.

More recently researchers in the higher education and museum studies fields have explored how tactile engagement with objects can contribute to knowledge acquisition and processing in unique ways, not least because touch is experienced via areas of the brain that deal with emotion, motivation and memory. 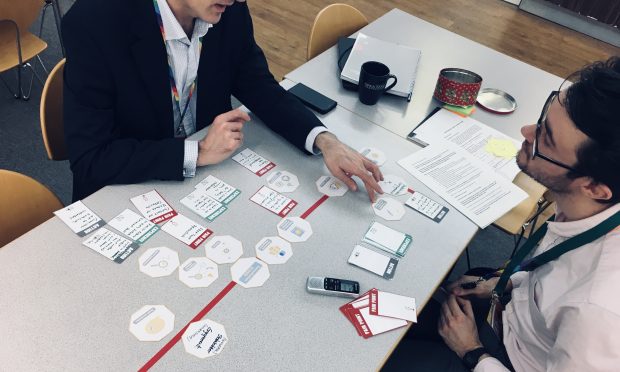 Informed by these insights from pedagogy, neuroscience, museum studies and our own experience, we deployed our physical consultation map in research interviews. These interviews were with civil servants that had been involved in different stages of the consultation process, covering a range of roles and departments, including policy making, project management and digital communication.

The map incorporated a board game aesthetic, encouraging challenge and movement from those interviewed. Its visual aspect allowed interviewees to see the consultation process as a whole rather than list of tasks, and the maps tactility pushed them to explore their experiences in unusual ways. For example, the simple task of physically moving stages around a journey map prompted interviewees to think in a non-linear way and allowed them more freedom in describing their typical experiences of consultations. 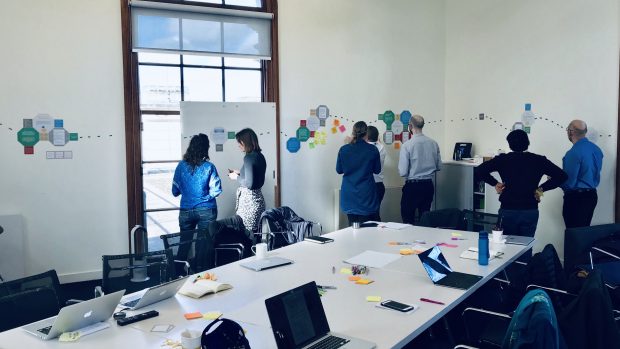 Kinaesthetic mapping of the policy consultation process, in progress

We translated our findings into higher level insights to share with analysts from a range of departments. Again we used a kinaesthetic approach, creating a physical ‘journey’ through the research insights on the walls of the room, where the analysts were also invited to add their comments (see image above).

One of the motivations of this approach was to bring in different, less-frequently used learning styles to the policy-making process, where the written document traditionally holds sway. Unfortunately we were not able to test whether this approach was fully accessible, including to those with mobility or visual impairments. This is where we need to go as a Lab, and we are actively addressing it in our current projects.

A map of the policy consultation process – and ‘pain points’

From this research we developed a visual map of the stages involved in a policy consultation (see image at top of page). The map shows what our research indicates is the ‘typical’ consultation journey, but also some of the alternative routes that interviewees cited. At each stage of the consultation, the map shows processes, experiences and tools typically encountered, as well as ‘pain points’ where processes cause problems and inefficiencies (see image below for a map of these pain points). 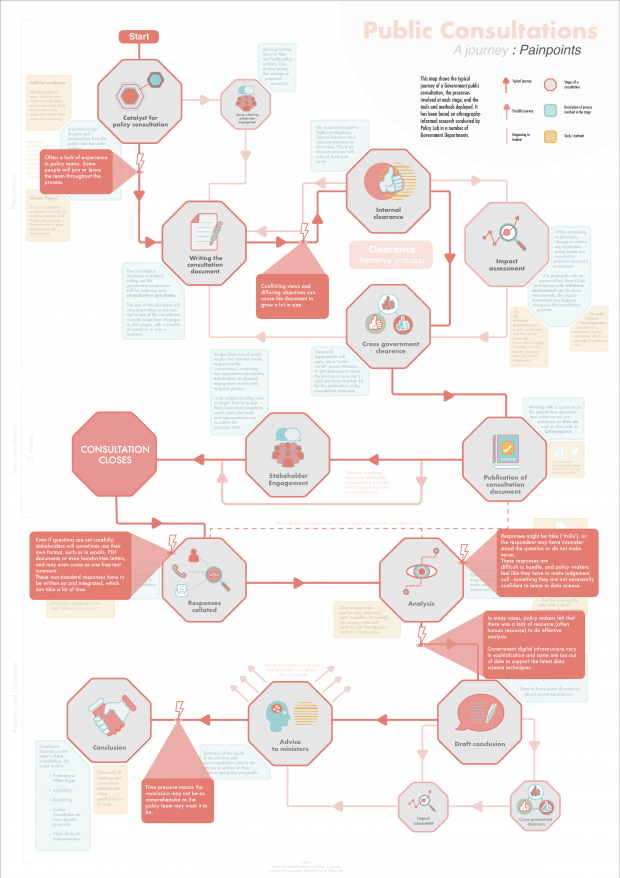 Examples of the most relevant pain points for data science interventions were:

The second part of this two-part blog suggests how data science can address some of these pain points. Whether you are working on data science or not, we hope that the maps shown in this blog can be a valuable resource for all those who may be involved in a policy consultation. Please look over the maps, and let us know if you find them helpful. 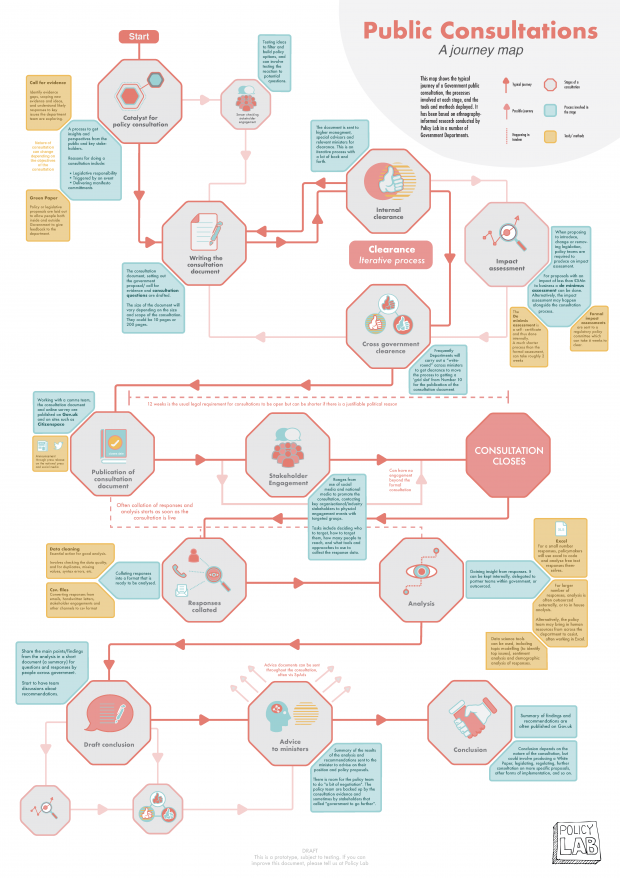