GROUP TREND: 2020 is the year of Facebook groups and here’s the stats to prove it – The Dan Slee Blog » LOCAL SOCIAL: Is it time for a Local localgovcamp?

Facebook is one of the central places in the UK where people to spend their time online.

The digital Parish Pump of Facebook groups is where the places people chew the fat, get their local news, gossip, rumour and information.

If a fire breaks out, it’ll be a Facebook group where the news gets broken.

If a pothole breaks out, a road closure happens or a break-in happens its likely to show up in a group.

Three years ago, I started research to see how Facebook groups and pages were being used. Crunching the 2019 data, the headlines are that pages have declined and groups have surged.

Two years ago Mark Zuckerburg talked about the shift towards friends, family and community as being where Facebook was heading. That’s playing out in your timeline with people seeing fewer updates from pages as they scroll. On mobile now have their own dedicated newsfeed. 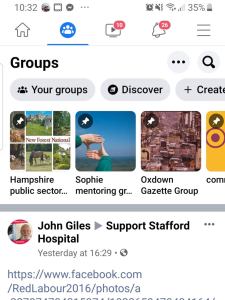 If you are a communicator looking to reach a local audience in 2020, knowing your Facebook admins is as important as knowing your beat reporters was twenty years ago.

Facebook took a hit earlier in 2019 in the wake of Cambridge Analytica and other scandals. In Statista data shows the UK numbers dipped from 40 million regular users to 36 million. That’s now recovered and upwards trend has resumed on 36.3 million.

Over the past three years I’ve researched Facebook groups and pages in Braintree in Essex. Why Braintree? It’s a mix of urban and rural. It has 151,000 residents with a new town and a surrounding network of almost 20 smaller towns and villages from the hamlet of Ashen to the town of Wishen.

You can join up to 6,000 Facebook groups. You can join a group as an individual or if the group admin allow it through your page. Overall user numbers are hard to come by with unverified figures rate it at 1.5 billion group users – or more than 60 per cent of the overall number of users.  Businesses are encouraged towards pages where owners can advertise. Groups are more democratic. You can see who the admin is.

Since 2017, the data is clear. Facebook groups across Braintree have increased by 121 per cent from 301 to 667.  They’ve now overtaken pages entirely. There’s now more groups in Braintree than there are pages.

There’s also more people a member of a group than there are people who like pages. On average, every member of the population is a member of four community Facebook groups.

Types of groups vary.  They can be a community noticeboard for a major town of more than 40,000 like Braintree. A group that serves this purpose is Braintree (Essex, England) with more than 6,000 members. Or for a smaller town of 1,000, Castle Hedingham, all village, street and community matters with more than 600 members.

Facebook groups are filling the void left by declining news rooms. But they’ve also caused their demise. They’re simple to set-up, have a strong local following and are cheaper. Why take out a small ad in the paper for £5 to sell your child’s bike when you can post an ad on a selling group for free? 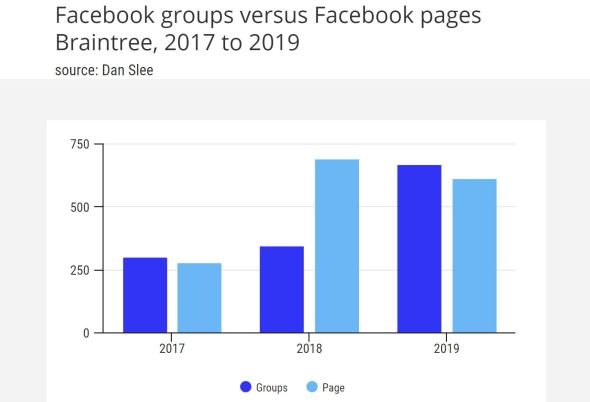 What the data says: Facebook pages are losing ground

The Facebook page remains a cornerstone of the landscape but they are declining.

In Braintree there are fewer pages and fewer people like them.

Facebook pages have long been hobbled by Facebook Zero has all but obliterated their effectiveness in reaching a broad audience. Post something to your page and it reaches one per cent of your audience. If it performs well with them it could go to more. But without a hefty advertising budget your content needs to be rip-roaringly tip-top to stand a chance of breaking out.

In Braintree, overall Facebook page numbers have declined by 11 per cent in 12-months to just over 600 in the district. In addition, there is a five per cent drop in the overall number liking them. Counting every page in and around the district, there are almost 490,000 likes.  That’s still a hefty number. 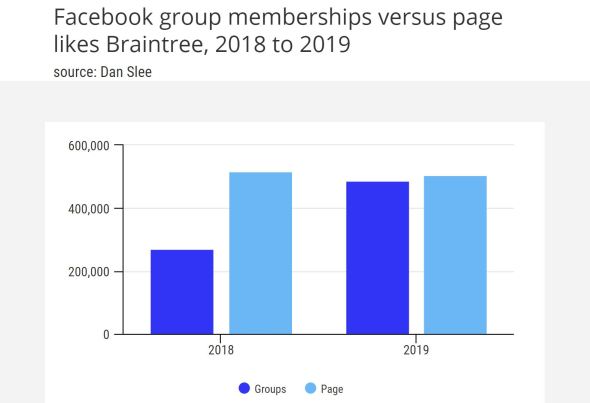 Don’t have just one Facebook page to rule them all

In the public sector, people are more inclined overall to like places provided by the council than the council itself with Essex County Council’s Great Notley Country Park with 8,000 likes, and Cressing Temple‘s 7,000 likes. That’s against the 8,000 who like the Braintree District Council page or the one per cent of the population who like Essex County Council’s page.

Brands and businesses dominate pages. So, Cineworld Braintree has almost 6,000 likes and almost 20,000 like the Braintree Village shopping centre page or small business like Bocking DogTails (94 likes) or The White part pub in Great Yeldham with almost 2,000 likes.

I help run workshops to help you use Facebook better with better pages content,how to connect with Facebook groups and how to create better Facebook ads. For more information on workshops with Sarah Lay click here and to ask about in-house advice drop me a note dan@danslee.co.uk.