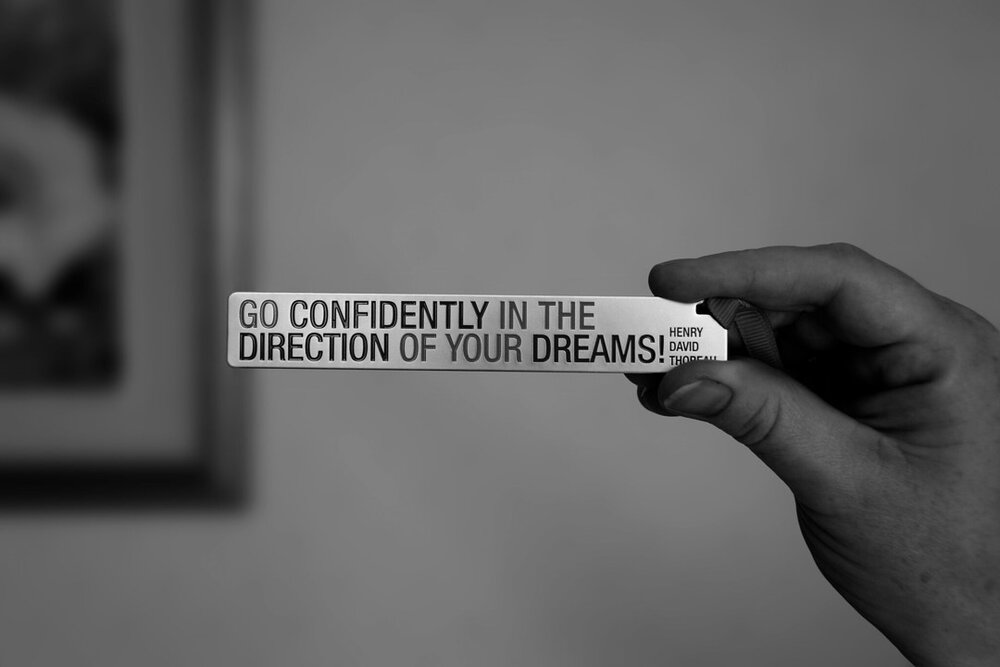 Resilience. Nothing quite like the cold hard steel of a pointed blade to test it.

Ahhh, 1997. You feel a lifetime ago. And yet with darkness, you can return. Along with the resilience to limit your effect.

Why, oh why, am I writing this? Writing for strangers what so few have known? Well, it’s been bothering me more than usual lately. I tend to (rightly or wrongly) wear my heart on my sleeve, bang on about values, authenticity and openness. I’ve spent my comms career tackling mental health stigma and fully recognise it’s our turn. We need more of our peers to tell their mental health stories, like Leanne Eherne has done and continues to champion.

And yet, a chance conversation in the office left me feeling only shame.

We were discussing Escape Rooms for our Christmas social. I was up for it, so long as they weren’t pitch black. “Are you scared of the dark?” a colleague laughed, not at all meanly – it was a fair enough question. “Errr, yeah, a bit,” I winced, quickly exiting to make coffee, eyes welling up, feeling like a prize plonker. Why did shame stop me explaining?

It’s happened before, my slight weirdness being highlighted.  Out for dinner with friends I made a subconscious beeline for the corner of the table that faced out into the room, so no-one was behind me. It was noted that I always do that. I blamed nosiness and fear of missing something, suppressing shame.

And I loathe walking through my city at night (am fine anywhere else). I’ll always stick with wherever a group goes rather than head off alone to find a bus or taxi. I’m embarrassed to ask someone to walk with me.

I can’t quite explain why I feel ashamed of what happened back in 1997. Because I know it wasn’t my fault. I didn’t do anything wrong.

It would seem that my shame has been merrily feeding off silence and isolation.

Perhaps breaking this silence opens up the chance that I’m not alone? That Leanne, and others who tell their stories, are not alone. That we’re not ashamed to say that sometimes even the toughest or seemingly most collected of us can struggle.

I’d been at uni six months – six glorious, boozy, finding-myself months. I’d nipped out to post a letter (my bi-weekly missive to mum) at my halls of residence grounds. It was about 9pm.

I was grabbed from behind, a knife against my neck and a voice that still haunts me. There followed (superficial) cuts across my chest. To prove intent? I don’t know. I don’t want to know.

And then severe fright, and an overwhelming need to fight. An elbow in the ribs meant the knife was dropped. A well placed backwards kick followed, and I was away.

I worked too damn hard to get to uni, this was not going to be how I bowed out.

I still can’t quite remember being taken by the police to Millgarth station, nor being questioned and wounds photographed. I very clearly remember slowly inserting a brand new phone card – with a picture of Alan Shearer on it – tapping out the ingrained number of my childhood, hearing mum’s voice crack before mine did.

Two days later there was banging on the door of my flat, intercepted by my fierce flatmates. I only agreed to talk to the earnest faced student journo given the lack of action from the university to warn others. The paper promised not to publish my name. They promised anonymity. On Friday morning in the student union foyer was a stack of fresh print with my name all over it. 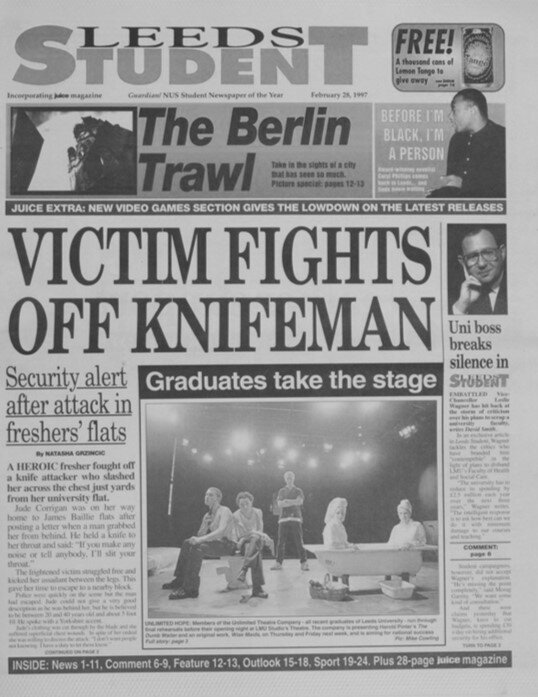 I didn’t go home because I knew I’d never come back. So I just hid for two weeks. Let the gossip die down, trying to resume a version of normality whilst reassuring my mum I was always safe. (Though, truthfully, I’ve never felt safe in Leeds since; I never saw a face so anyone passing could be him. That messes with your head something rotten.)

Post event support was entirely absent; shame on them all. Shame on me for not pushing harder.  After a couple of months of no sleep, paralysing panic attacks and pretty self-destructive behaviour, my GP suggested I had post traumatic stress disorder. Yeah, no shit.

I was offered sleeping pills which I declined. This reality check of what seemed, at the time, my only option gave me the kick I needed. I had to straighten my spine, lift my head.

And, by then, I was no longer whispered about in lectures. Drunken idiots had stopped asking me to show them the scars. I stopped wearing polo necks and it began to feel easier. Resilience, my old friend, there you are.

Resilience. We talk a lot about it, eh? The importance of knowing how to stop yourself reaching breaking point. Like a palm tree battered in a hurricane, you are forced to bend to the point that your leaves brush the ground.  Yet you have enough strength in your core to return proud when winds have died.

Have you ever stopped to think about your resilience and, when you need to dig deep, where it comes from?

Resilience began for me, like so many, with playground bullies. I was an easy target; single parent family in a Catholic school. We were incredibly poor and looking back, I guess it showed.

Mum’s constant advice was: Stay strong, don’t let them know they’re getting to you and they’ll move on. It always worked, for a bit.

Mum was diagnosed with MS when I was 8. She was convinced she had cancer, so the cruel diagnosis of MS was, in fact, a relief. She left the hospital and bought a mug on the way home. It had a chintzy smiling cat walking along a wall covered in flowers.  She called it her No Cancer Mug and used it daily, calling it that her whole life. She remained grateful it was “only” MS. It was “only” the progressive type of MS that quickly saw her a prisoner in her own body. Every day (to this day), her resilience inspired me.

Yet Mum was also regularly depressed. She’d talk about “My old friend, that Bastard Black Dog” who’d followed her around all her life, snuffling and waiting to consume joy.  So I guess I can’t blame the MS for that.

When it came, it was that type of thick fog depression that swirled around us all and, as a child, I was terrified of not being able to see through it either. Yet resilience meant I somehow always did.

I won’t go in to being a child carer. Let’s just say I quickly learnt the art of multitasking. Luckily(?) I went to a pretty rubbish comp where the good kids were left in peace. Except, inevitably, by bullies. But I cracked on and knocked out the marks. Teachers turned a blind eye and, at the time, I thought it was kind. Now I realise it was the very opposite of that; nobody ever once asked if everything was ok. I was just that good kid who cracked on, alone.

So yeah, all this certainly gifted me resilience. I was abley running the household by the time I became a teenager whilst still making time for am-dram, youth orchestra and mournful poetry… such beautiful escapism.

I worked a couple of jobs and messed about with A Levels. Ditched one so I could start another and consciously go back a year, just delaying. I didn’t want to leave mum despite the hard won social care battles to get a full support package in place. When it came to it and I got an unconditional offer from Leeds Uni she gave me an ultimatum: go to uni (live my life) or she’d throw me out anyway.

I’ll never regret my childhood because it gave such opportunity to learn strength and compassion. And, dear God, how mum loved me, and I her. Her incredible resilience transferred to me and, when the whole knife thing happened, it was this resilience that saved me. Possibly, quite literally.

But, you know what? Resilience is also a mask. An armour. A shield.

I’m renowned for being strong, “a tough cookie”. I’ve always prided myself on that dignity of quiet strength.

I didn’t cry on my wedding day. My brother was delayed in Afghanistan and my mum was too poorly to come, leaving me with zero family there. The wedding planner panicked about me taking the aisle alone, she’d never seen it done.   I liked the idea of being first – the one she’ll tell stories of – so I swept in with my head high, wishing I knew how to glide gracefully. But I didn’t cry.

I didn’t cry at mum’s funeral. I said all the things I needed to in front of All The People.  I kept my end up. For her. For me.

But, you know what? It’s bloody exhausting. That quiet dignified strength takes its toll. And it leads to people expecting you can always cope.

Honestly, I’m pretty tired of resilience and being expected to be the strong one, taking whatever crap gets thrown next. Tackling unkindness. Sucking it up. There are times I just want to stop the world and get off…then lie in a crumpled heap for a while, feeling all of the feelings.

So perhaps dig a little deeper when asking a supposedly strong person if they’re really ok. In fact, advice is to always ask people you’re worried about “are you ok?” at least twice. Our first answer is most likely a shield.

If you stuck with this self-indulgent post, thank you. It’s been incredibly therapeutic writing it. I’d recommend the process if you need it too.

I’m not looking for sympathy or to claim my sob story. There are friends and colleagues dealing with far worse and bearing incredible resilience daily.

I’ve wanted to write this for a long time yet never felt brave enough. I’m just (oddly publicly) trying not to feel alone anymore; not silent and not isolated. And certainly not ashamed. To own my story.

The more of us who tell stories, however and to whoever we need to, the more we normalise our struggles with mental health. The more we talk, the more we accept it’s ok not to always be ok. It’s ok to have our quirks and our weirdness – to be whoever life has knocked us into.

Scratch the surface and all of us have something going on, our own stories. Our own darkness we’re afraid of.

For now, I’m stepping towards the light.

Jude Tipper is strategic communications lead at NHS Digital. You can say hello to her on Twitter at @JudeTipper

Image via Son of Groucho