SURVEY: Does the average length of a Facebook video REALLY have to me three minutes exactly? – The Dan Slee Blog » LOCAL SOCIAL: Is it time for a Local localgovcamp?

More than 12-months ago Facebook set the cat amongst the pigeons by changing their optimum video lengths.

What was once a 30 second length clip as an ideal length jumped up to a three minute suggested length.

But one question that has often presented itself… does Facebook really penalise shorter clips?

Is there a guillotine that drops on your unsuspecting clip if its less than 180 seconds?

I thought I’d find out, so, I’ve crowdsourced a quick survey with members of the Public Sector Comms Headspace Facebook group.

What the survey said

As part of the survey, people went onto their Facebook profile and logged their first three videos survey organically. I then crunched the numbers. More than 40 people logged almost 150 videos.

What wasn’t too surprising…

The average length of a Facebook video in the survey was 2 minutes 46 seconds.

The most popular segment of time for a video was between three and four minutes.

However, what was surprising…

60 per cent of Facebook videos served organically were less than three minutes.

The longest video in the survey was almost 16-minutes long. 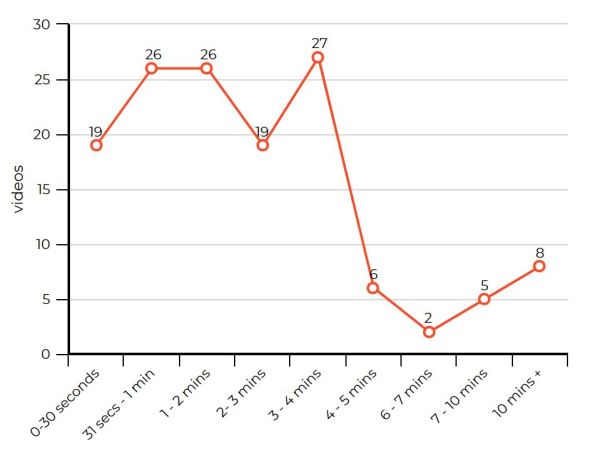 So, in short, there isn’t a sword of Damocles over three minute video length. You can make something shorter or longer.

The Facebook algorithm is an ever-changing and complex thing and there is more to judge in a clip than just duration.

I’m tempted to think that if a video is engaging and creates shares and likes then whatever length it is it’ll work. I’d be tempted to think of 30-seconds as an absolute minimum and see how you can create a longer clip.

Thank you if you took part in the study.