CORONAVIRUS COMMS: You’ll need to enlist a team to play whack-a-mole with online rumour – The Dan Slee Blog » LOCAL SOCIAL: Is it time for a Local localgovcamp?

Scroll through Twitter and Facebook and you can find all sorts of weird conspiracy theories. And that’s before venturing onto Instagram, TikTok, Snapchat, Messenger and WhatsApp.

But to know the problem you need to understand the solution.

Logging onto Facebook this morning this story about a parent taking their child out of school because there’s no hand sanitiser at the door. And that feels like the tip of the iceburg.

On the first coronavirus story I found this meme posted as a comment.

The comment thinks that the virus is a vehicle for a sinister New World Order conspiracy. Laughable? Once a Trump presidency was seen like that.

On Facebook, critical faculty largely goes out of the window. Research from Reuters Institute for the Study of Journalism said that almost half of people can’t remember who shared the content on Facebook in the first place.

The handy thing about Facebook is also its weakness. Your mate Dave shared it. He’s bound to have checked it. Anyway, Dave’s a good guy. But chances are Dave hasn’t.

Scrolling further, a link from Birmingham Live takes me to an unofficial coronavirus page that is filled with conspiracy like this:.

You could hide under your desk. Or do something about it.

How you can build a defence against a wall of misinformation

Thankfully, history has the answer.

In 2011, after riots swept the UK The Guardian and academic researchers spent time analysing first hand accounts, Twitter data and court action to map what and how things happened.

Their conclusions Reading the Riots can be found here and they’re worth spending time with if you haven’t already. While the research is eight years old they hold some universal truths.

Our findings confirm that police, emergency services and government agencies face
difficult problems in making effective use of social media platforms such as Twitter during crises. In particular, though our analysis of rumours on Twitter suggests that false rumours are ‘self-correcting’, we argue that there is a public safety case for providing information and advice via sources that the public can trust in a more timely way.

In short, while some rumours will be shot-down by people online it would be helpful if they had the tools to do it and also be encouraged to do do.

Create the content. But actively get a team of people to share it from their own channels. Staff. Community leaders. Active citizens. Neighbourhood Watch people.

Kent County Council’s video update here from their Director of Public Health is an example of that. Short, concise and to the point its on the money and got re-used by the media and elsewhere. 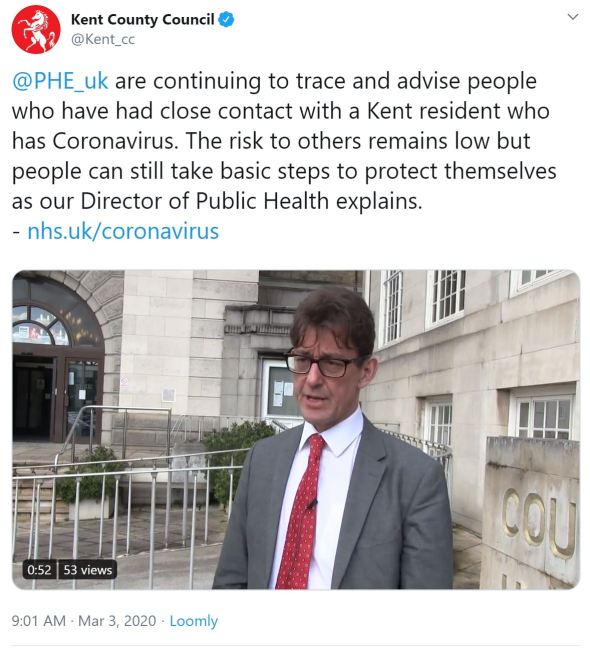 But being pro-active feels like a thing to do, too. Going into Facebook groups as yourself with sharable content feels like a must.  I’ve blogged about this before and part of the Vital Facebook Skills workshop deals with this. In short: make friends with the Facebook group admin and see if they’d be receptive to you or your page joining.

An example of this is Barking, Havering and Redbridge University Hospitals Trust who posted content this into a Facebook group.

By all means take the central message from Public Health England or elsewhere but present it in a way where it can be shared online.

In emergencies, its striking to see the good people as well as the bad. There are people who want to help as well as those who are busy photoshopping sharks into Cockermouth High Street.

But also you need to think about how you can build bridges with bloggers, hyperlocal site owners and most of all Facebook group admins as well as your staff.

A whatsapp group with those who can fight your corner with links feels like part of this.

They could be doing the hard work of myth-busting if only they knew they had a valued role.

So, play whackamole with rumour.

But recruit and encourage others to do it for you with the tools you create.