Need something in your neighbourhood? Sometimes all you have to do is ask – mySociety

What happened when you contacted your councillor or MP through WriteToThem? If that was the first step towards a change for the better — large or small —  we’d love to hear about it.

When we asked this question on Twitter, the first person to reply was Tim Morton, who told us how he’d used our services to get a useful addition to his local neighbourhood. The story began on FixMyStreet, but really came to fruition thanks to WriteToThem.

Tim says that he’s been using FixMyStreet since 2008: “If you look at my reports, the vast majority relate to the street I live in, and my local park” — and indeed, that’s the scene for the success he tweeted to tell us about: the story of the Grit Bin. 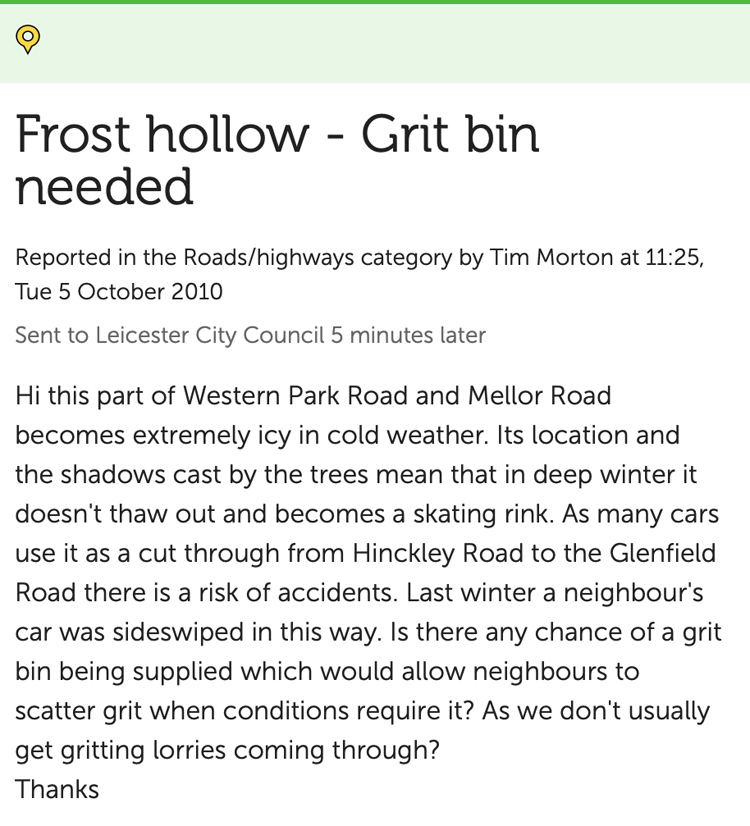 “I pressed send,” says Tim, “and waited for something to happen”.

But unfortunately, nothing did — had Tim’s message been lost in the internal workings of his council?

It was radio silence until four weeks later when FixMyStreet’s automated mail arrived, asking whether the report had been seen to. If you click ‘no’, you’re taken to a screen suggesting a few ideas for escalating your issue, one of which is to contact your local councillors through WriteToThem.

Tim decided that this was a good idea, and posted an update on his FixMyStreet report to say so:

“Again, though, there was a period of silence… and I’d almost forgotten about it,” says Tim.

But sometimes these things take a bit of time. Because, seven weeks later, and just in time for Christmas: 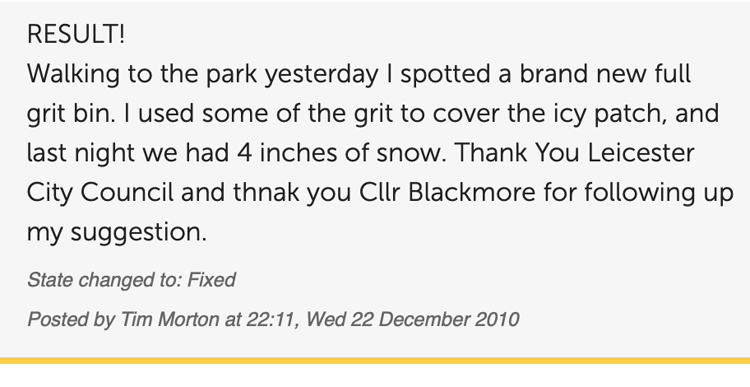 Tim’s simple request had brought about a useful and tangible change for his community.

OK, so, ideally it would have happened quickly and with full communication from the council, after that first FixMyStreet report. But on the other hand, this is a great example of how sometimes you have to persevere, and try another route, before you get success.

“The grit bin is still there: occasionally I ask for a refill, and when the snow falls I trudge along the road and shovel grit across the junction.”

So the benefit has lasted — and is allowing Tim to do his bit for his community even now, a decade later. 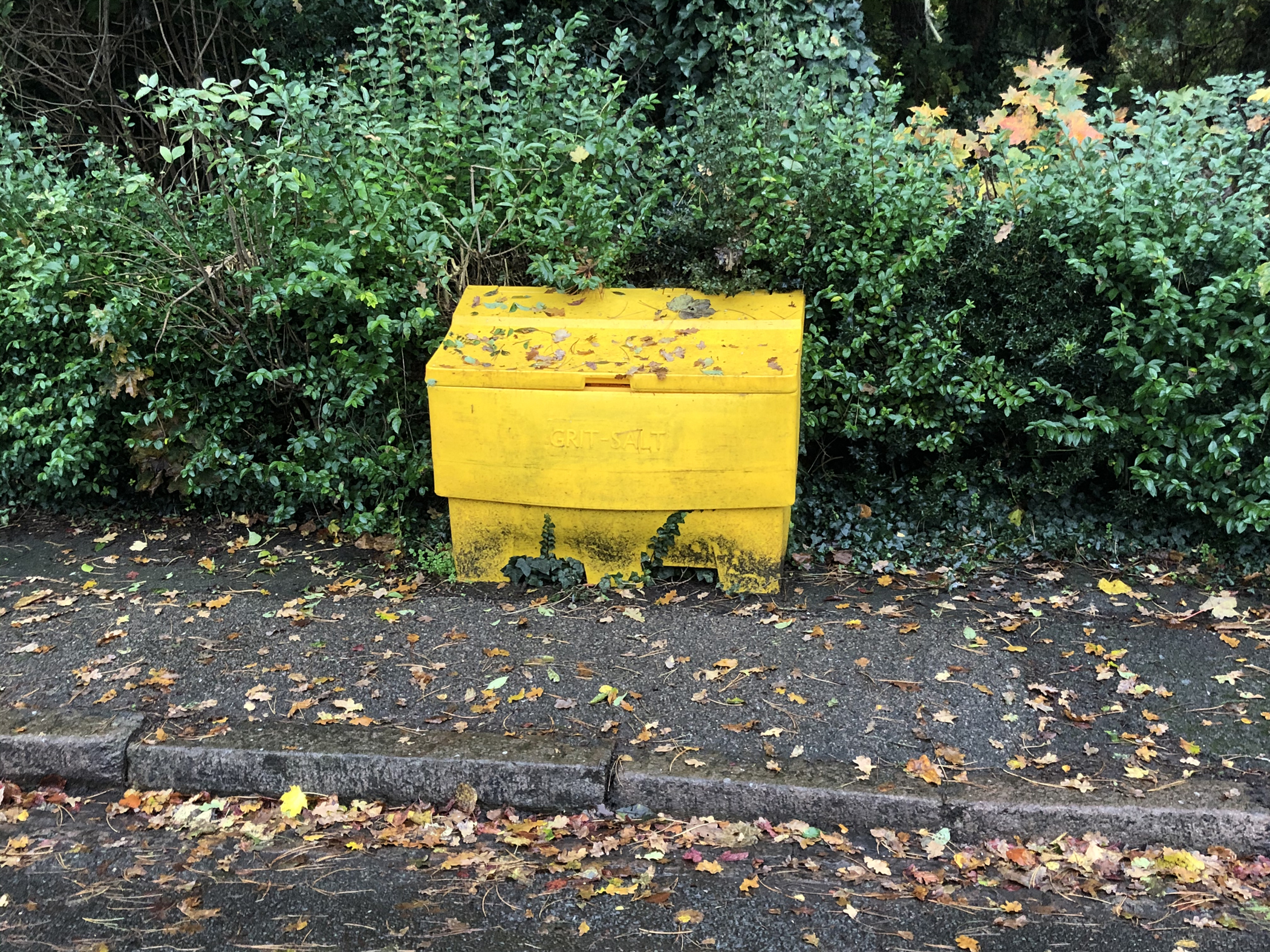 Tim rates FixMyStreet so much that he’s demonstrated it to community groups and on training courses. He explains, “I think the great thing about FixMyStreet is its ease of use, and the very visible audit trial.

“One thing I always point out is the timestamps on my initial reports. I often make reports in the evening, or at weekends: they’re done in the moment and not by trying to get through to the council on Monday morning or when the office is open. I find if I had to wait, I’d forget about the issue.

“Leicester Council has been good at responding to my requests, and I always post their replies in the comments on my reports.” (Leicester is not currently a FixMyStreet Pro client, so their responses are not automatically published on the website, but sent to the report-maker by email.)

Being an expert user, of course Tim knows all about FixMyStreet’s more advanced features.

“I’ve recommended that community groups use the local alerts function. This means they can see what other people are reporting in their area, which they may be unaware of.

“If they’re a group that focuses on neighbourhood improvement, it will identify potential issues for them to work on, and in fact, may introduce them to potential new activists in their area. I’ve pointed Ward Councillors to this, as well, as it can be really helpful in their work”.

Thanks so much to Tim for telling us all about the grit bin and his efforts to help spread the word about FixMyStreet. A grit bin may seem like a small win, but when you consider how many thousands of reports are made up and down the country every week on FixMyStreet, and how many messages are sent to councillors on WriteToThem to ask for a neighbourhood improvement, you can see that the net effect could be massive.

And on that note, if you have brought change by writing to your MP or councillor, by making a FixMyStreet report or perhaps by using one of our other services, please let us know — we’re all ears.

We’re using these stories as part of a training module that helps young people understand how democracy functions in the UK, and how to work within it to make positive change. Your stories will help us to show this in action, rather than just theoretically, so you’ll be helping us to help those who need it. Thanks!