Reflections on the GOV.UK accounts trial so far – Inside GOV.UK 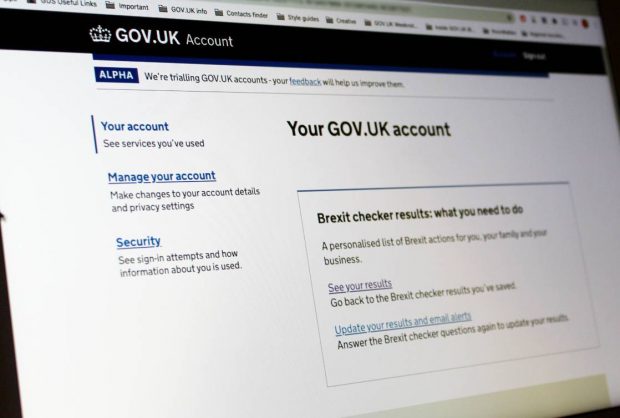 We’ve been running a trial of the GOV.UK account attached to the Brexit checker since November 2020.

Users provide information about their personal or business circumstances to the Brexit checker and are given a personalised set of actions based on their answers. The GOV.UK account gives users the option of saving their results so they can return to them later, and also the option to sign up to email alerts if there are new actions they should know about.

We’re doing the trial to help users prepare for Brexit and understand what to do now the Transition period has ended, test our account prototype, and to understand and hear feedback on this functionality in a live setting.

Now, more than 50,000 users have signed up, and we want to reflect on some of the things we’ve learned so far.

We had a hypothesis that users who would need to make the most changes to adapt to the new rules were going to sign up for an account because they would need to return to the list of actions. However, in reality, we had a wide range of people register.

This information comes from questions asked by the Brexit checker; in total a potential 124 attributes are used to offer a personalised set of actions. It turned out that a very broad range of users created accounts, with the most popular attributes being:

These trends have stayed largely the same over time. This was interesting and challenged our hypothesis that we would see spikes in certain users as policies were announced. This could in part be down to COVID-19 pausing much UK to European travel, but was still one of the most notable insights so far.

One of the most important questions we had from this trial is whether users will create an account. The short answer is yes they do.

Another question we had was whether users would be put off by multi-factor authentication. Using funnel analysis – a method of understanding the steps required to reach an outcome (in this case registration) and how many users get through each of those steps – we could see that users were not dropping out of the journey at that stage, so multi-factor authentication isn’t currently a barrier to account creation.

That isn’t to say that there were not some early challenges. During some initial analysis on the trial it was discovered that even though the creation of GOV.UK accounts was high, fewer users were signing up to an account than had been signing up to email notifications – these are a way for users to get an email when a relevant piece of content has changed, in this case about Brexit.

The other learnings are less to do with data analysis and more to do with the practicalities of building and running a product. There are lots of things in this category but an important one to highlight is the importance of good data governance.

We saw early that putting the right processes in place now, when the account is small, will mean that we protect users’ data as the account develops. We did this by making sure all reporting data was based on a version of GOV.UK accounts data which has had all personal identifiers removed. We also put a focus on transparency and user control within the account, which we blogged about.

A surprising result of this was the very high rates of consent among users willing to contribute to both analytics data (77%) and to be contacted for feedback (68%). We put this down to the measures taken to be as transparent as possible with users, and also in that GOV.UK account is a trial.

Ultimately, all of these learnings tell us about the GOV.UK account in the context of the Brexit checker service, so it’s hard to take completely universal lessons from it. Clearly, the value of any account really comes down to what it can do and what it enables.

We are extremely excited to explore how the GOV.UK account can improve GOV.UK as a platform, allowing us to continually meet changing user needs and expectations. So next we will be exploring ways to expand the functionality of the account across the rest of the publishing platform to make it easier to find things on GOV.UK.

As the trial continues we’ll keep iterating and building on our work. Subscribe to Inside GOV.UK to keep updated on our work.