This past month, we’ve been laying some more of the groundwork for our climate work, and getting stuck into some finer details. The recent recruitment drive is starting to pay off — we’ve had four new members of staff join mySociety this week, and in the climate team we’re delighted to be joined by Emily Kippax.

As Delivery Manager on the programme, Emily’s going to be working with us on getting the right balance between planning and acting — and making sure that we align the work to play to our different skillsets and roles.

Researcher Alex and designer Zarino have been figuring out the best ways to learn more about how and why people are using the Climate Action Plans explorer site. This should help us understand how to improve it, particularly as we start to share it with more people.

First of all, we’re thinking about a pop-up asking visitors to click a few buttons and let us know who they are — what sectors they work in, what they’re trying to find, et cetera. Zarino is working on the hunch that if we add our friendly faces to this request, showing the real people behind the project, it might get a better take-up. I’m looking forward to finding out whether he’s right.

Meanwhile Alex has been doing some work on the other end of that request. He’s seeing how to make it easy for the team to understand the inputs and use them to measure our progress.

He also took a quick diversion into non-contiguous cartograms (courtesy of the templates produced by the House of Commons library), to map the creation of climate action plans by local authorities in a way that accurately reflects the population covered by those plans. 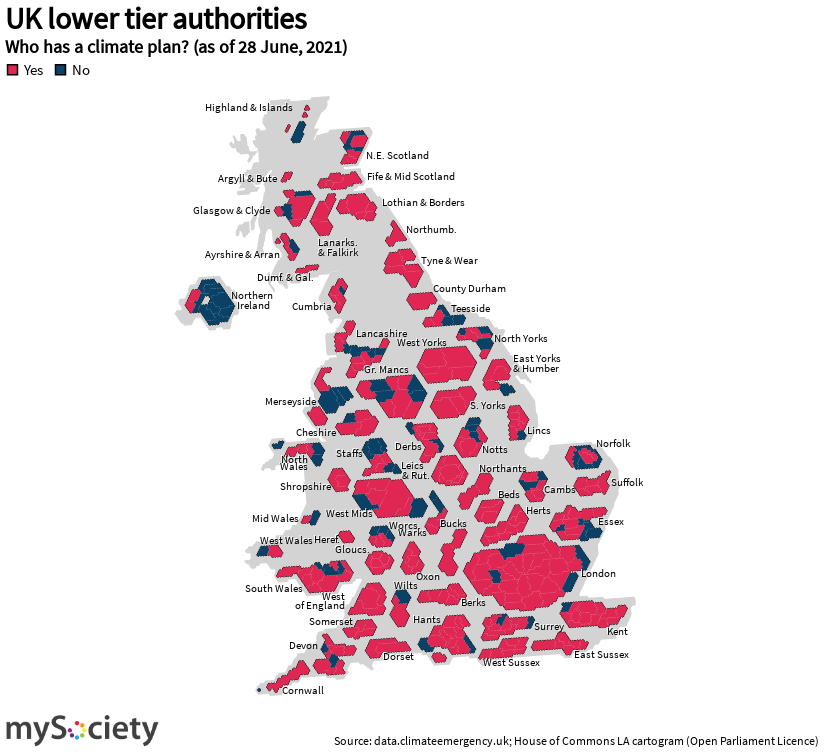 Mid-month, we co-hosted a webinar along with Friends of the Earth and Climate Emergency UK: ‘How can local councillors help to meet UK climate targets?’.

This was particularly aimed at newly-elected councillors wanting to understand what they can do around the climate emergency, and what resources are available to help them (a video of the session is available). It was really exciting that the session was so well attended, with an audience of more than 200.

Finally, our colleagues Grace McMeekin, Isaac Beevor and Suzanna Dart over at Climate Emergency UK have produced a set of questions to ask about climate emergency action plans that will illustrate what the differences are between them. This builds on previous work with Ashden, The Centre for Alternative Technology, APSE and Friends of the Earth  to produce a checklist for the plans.

We’re really keen to see if we can work together to turn what can be quite dry documents into something a bit more accessible and comparable that we can share openly, with other councils, citizens, action groups…anyone who wants to see it.

As the team embarks on the hard work it takes to make simple services, it reminded me of what the journalist Zoe Williams wrote about civic technology a few years ago:

“Any meaningful access to democracy requires that the citizen can navigate the terrain. These mini institutions […] collate, editorialise, create digital order for the public good. The more transparent and accessible democracy is, the more obvious it is which bits could be better. It’s like sitting in on the meeting where they invented dentistry, or clean water: kind of obvious, kind of earth-shattering, kind of tedious, kind of magical.”