Last week, the prime minister announced his flagship new social care policy, alongside a levy to deliver higher spending on health and social care. On the same day, the chancellor officially kicked off the comprehensive spending review process, confirming that departments’ budgets for the next three years will be set on 27 October in the first multi-year announcement since 2015.

He also announced the ‘spending envelope’: how much money would be available in total to allocate among departments. That envelope means that – outside of services that already have settlements announced, like the NHS – spending elsewhere will be tight. Indeed, departmental budgets will in fact fall slightly, in real terms, for the next two years, before seeing any real-terms increases in 2024/25.

Given the need to address Covid backlogs in public services – not just the NHS – and the low cost of government borrowing in the short term, this spending profile is the wrong one, and risks two years of poor performance and potentially longer term costs for many public services.

The funding announced for NHS England last week provides a large boost in 2022/23 compared with (non-Covid related) spending this year, with steadier increases in spending after that. NHS spending will be £15bn (11%) higher in real terms in 2024/25 than 2021/22, with more than £10bn (8%) of that increase occurring next year. This is sensible, helping the NHS tackle backlogs that have built up during the pandemic.

However, other public services will not get similar support. Accounting for the money already committed to health, social care, schools, defence and aid, remaining ‘unprotected’ spending (everything else) will increase by only £5bn (4%) in real terms over the spending review period – and that is after a 2% drop next year, as the below chart shows. This, perversely, gives many public services facing the same difficulties as the NHS the opposite funding profile. 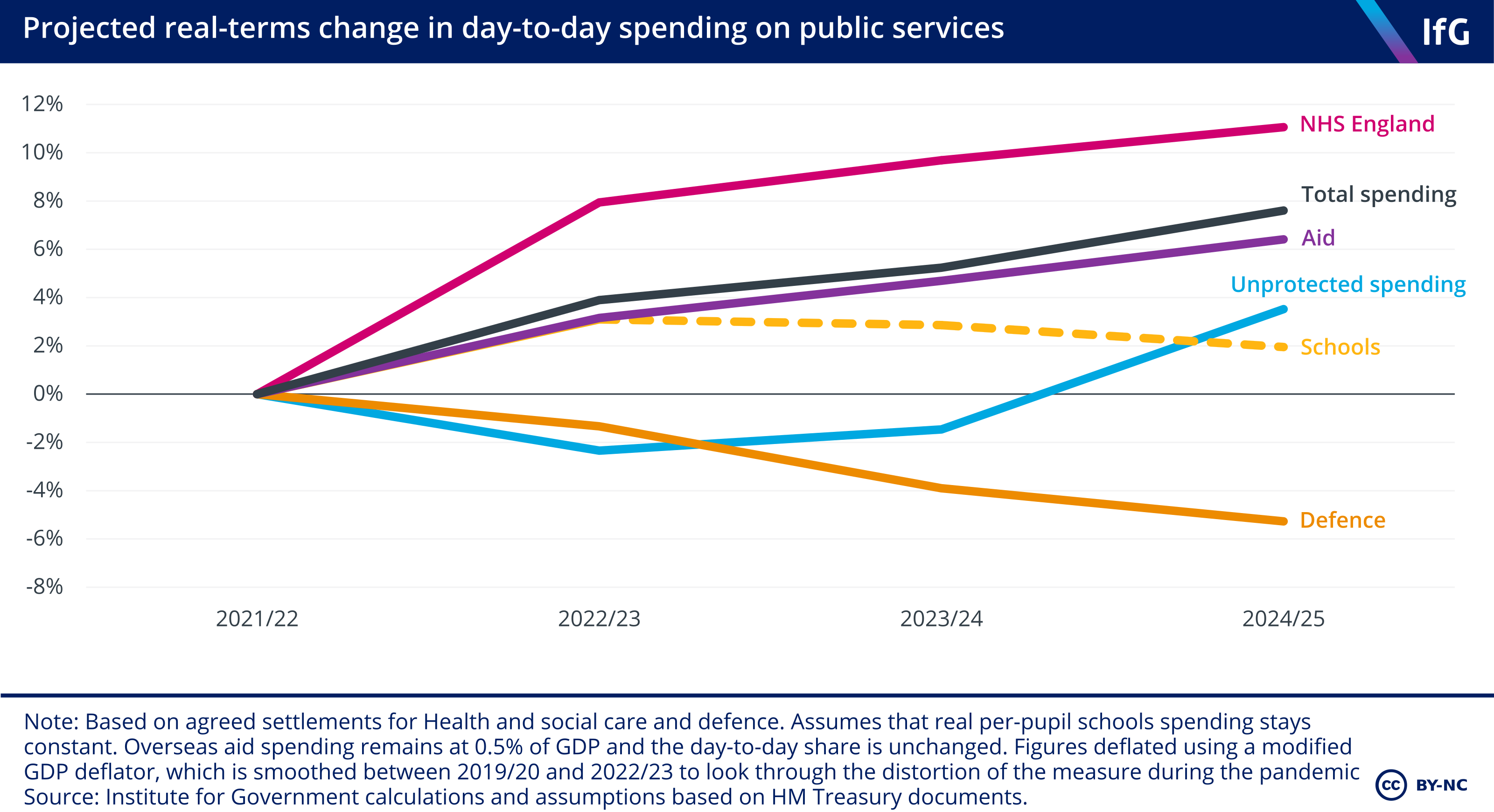 The government’s rationale for frontloading NHS spending is clear. But it should apply in other services too. Funding is needed to help schools offer pupils the chance to catch up on the learning lost during the pandemic. Courts need to hear more cases than usual to reduce waiting times. There may also be a surge in referrals for children’s social care.

In each case, the sooner that backlogs can be dealt with the better. Doing so will require a temporary surge in activity – at cost – but until addressed the impact of Covid backlogs will be felt and public services’ performance will suffer as recipients are required to wait longer or attainment remains below pre-crisis levels. Failing to address these issues quickly also risks storing up greater problems and higher costs for the future. As long as there are staff and resources available to increase activity, more money sooner rather than later would be the most effective way to move beyond the Covid pandemic rather than continuing to feel its lasting effects. Providing more funding to support public services next year and the year after need not mean spending more permanently in 2024/25 and beyond.

The chancellor could afford to spend more in the short term

Sunak is keen to maintain fiscal discipline and get to a position where the government is not borrowing to fund day-to-day spending. However, he is unlikely to reach this goal until 2024 at the earliest, and any new fiscal rule he announces is likely to give him flexibility to spend more in the short term. Given that the government can borrow at cheap rates, more borrowing in the next two years would not undermine the government’s fiscal sustainability.

The chancellor will worry that any ‘temporary’ surge in spending will be difficult to reverse and become permanent – a pressure he is currently facing over the controversial planned cuts to Universal Credit. However, even adjusting the spending envelope so that unprotected spending increases steadily across the three years would be a marked improvement on the current profile. He could also specifically ringfence funding to address backlogs to make it easier to stop once these have been resolved.

Either way, Sunak’s current approach risks unnecessarily burdening public services with the fallout from the pandemic for an additional two years. He can afford to provide more money for those years; it would be prudent to do so.