Downing Street chiefs of staff – The Institute for Government

What does the Downing Street chief of staff do?

The Downing Steet chief of staff is the UK prime minister’s most senior political adviser. Chiefs of staff are sometimes, but not always, political appointees, with close links to the political party of the government at the time.

The role is extremely influential. Chiefs of staff advise the prime minister on a wide range of issues, including government policy, party politics and communication strategies. The chief of staff would also normally oversee and manage Downing Street political staff and the work of special advisers across government.

However, the duties of the role vary considerably depending on the skills, previous experiences, and character of the prime minister and the chief of staff at the time. In an event with the Institute for Government, Lord Barwell, chief of staff under Theresa May, said that “by definition, there can’t be a job description”.

Nevertheless, Barwell did offer some unique insights into the nature of the job in his Ministers Reflect interview, laying out what he believes to be the six key aspects of the role:

What is the difference between the principal private secretary to the prime minister and the chief of staff?

Most teams in No.10 have seen the chief of staff work very closely with the PPS. On the relationship between the two roles, Gavin Barwell told the Institute for Government that “you work really closely with the prime minister’s principal private secretary…to run the building. And I think that is about setting the tone”.

Who is the current chief of staff?

Steve Barclay was appointed Downing Street chief of staff on 5 February 2022. He has retained his ministerial role as chancellor of the duchy of Lancaster, minister for the cabinet office, and is MP for North East Cambridgeshire. This garnered considerable attention in the media and from the opposition, with questions raised as to how Barclay would find the time to fulfil all of the above roles.[1] Steve Barclay is the first sitting MP and current government minister to become Downing Street chief of staff.

How and when did the chief of staff role arise?

The ‘chief of staff’ title is originally a military term. In 1953, President Eisenhower became the first US president to appoint a political chief staff , and the role has continued in the US ever since.[2] Margaret Thatcher was the first UK prime minister to appoint a chief of staff – David Wolfson (later Lord Wolfson) – in 1979. Wolfson had been director of Great Universal Stores, and then secretary to the shadow cabinet, prior to his appointment. He was one of Thatcher’s closest aides, describing his job as “making her aware of the few things that mattered and to make sure she saw the right people at the right time.”[3] Wolfson left the role in 1985 and the position was left vacant.

Tony Blair re-introduced the chief of staff role to Downing Street when he became prime minister in 1997, appointing Jonathan Powell, who had previously worked as a senior diplomat.

Unlike political appointees before him, Powell was given unprecedented powers to issue orders to civil servants.[4] He wielded considerable influence during his 10 years, playing an important role in negotiating the peace process in Northern Ireland.[5]

Who else has been Downing Street chief of staff?

When Blair resigned, Powell stood down as chief of staff. Gordon Brown experimented with different models of the chief of staff role during his time as prime minister. First, he temporarily appointed civil servant Tom Scholar (later Sir Tom Scholar) as both Downing Street chief of staff and his principal private secretary, marking a move away from Blair’s introduction of a US-style chief of staff.

In January 2008, at the point of Scholar’s planned departure, senior civil servant Jeremy Heywood (later Lord Heywood) took on the principal private secretary role and Stephen Carter (later Lord Carter), formerly CEO of Ofcom, became chief of strategy and principal adviser to the prime minister – de facto chief of staff.[6] Carter had been a member of the Labour Party prior to taking up his position at Ofcom, and rejoined the party upon his appointment as chief of staff.[7]

Carter only stayed in the post until October 2008 and, although it is sometimes claimed that Heywood became chief of staff for the remainder of Brown’s premiership, he explained that this was not the case at an Institute for Government event. The position was left vacant until Gordon Brown left office.

When David Cameron became prime minister in 2010, he appointed Conservative adviser Edward Llewellyn (later Lord Llewllyn), who had worked for him in opposition, as his chief of staff. Llewellyn was part of a small team that negotiated a coalition deal with the Liberal Democrats.[8]

After David Cameron’s resignation, and Theresa May’s appointment as prime minister in 2016, Conservative special advisers Nick Timothy and Fiona Hill became joint chiefs of staff. While at No.10, they gained a reputation in the media and among staff as exerting a tight grip on power on May’s behalf.[9] When the Conservatives lost their majority in the 2017 general election, under pressure from the parliamentary party, they were replaced by former minister Gavin Barwell (later Lord Barwell).[10] Barwell has since written a book about his experience in No.10.[11]

Before becoming chief of staff, Rosenfield previously worked as a civil servant in the Treasury, acting as principal private secretary to chancellors of the exchequer Alistair Darling and George Osborne, and later as an investment banker. Despite his civil service background, Rosenfield was appointed politically as a special adviser by the prime minister. In February 2022, Rosenfield resigned, along with two other senior special advisers at No.10. In December 2021, it had been reported that Rosenfield had attended at least one of the Downing Street Christmas parties in December 2020.[13] 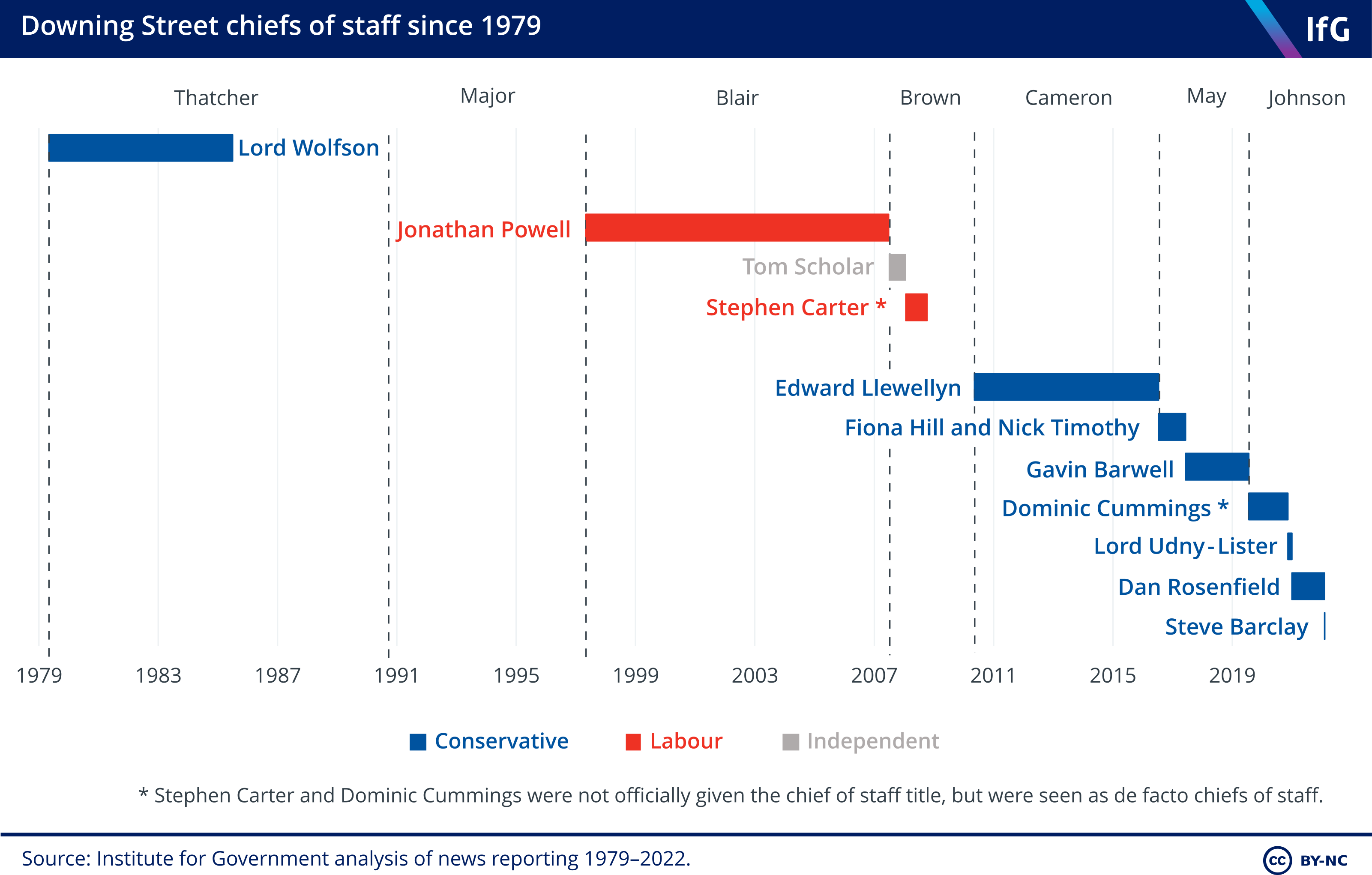