The government’s plan to attach targets to efforts to reduce NHS backlogs is understandable. Targets can increase the accountability of service providers, incentivise deeper analysis of the barriers to improvement, and focus the machinery of government on specific problems. Most importantly, Institute for Government research has found they can work.

Following the introduction of high-profile targets and other measures in the English NHS from 2000, the waiting times for elective procedures fell much faster than in Scotland, Wales and Northern Ireland, which had different performance management systems. And in A&E, there is good evidence that the 4-hour target substantially reduced mortality rates. In short, the less time you wait, the less likely you are to die. However, targets alone are not enough to deliver improvements.

Targets are only part of the solution

The success of the Blair era approach shows that targets can help hospitals to make good use of the resources they have. But targets will provide little help if hospitals are under-funded, under-staffed, or operating out of inappropriate buildings.

Even before the pandemic struck, the NHS was missing key waiting time targets. And in many cases had been for years. This decline has been driven by a combination of rising demand and constrained funding over the past decade. But it may also be that these long-standing targets have become less impactful over time. They certainly provide less incentive if NHS Trusts judge that these targets are now unachievable given the resources they have at their disposal.

More recent targets have also had little impact. In the run up to Christmas, NHS England ordered Trusts to halve delayed discharges by end of January, but the target wasn’t backed by an analysis of the problem or the resources to do anything about it, and the situation has actually got worse. 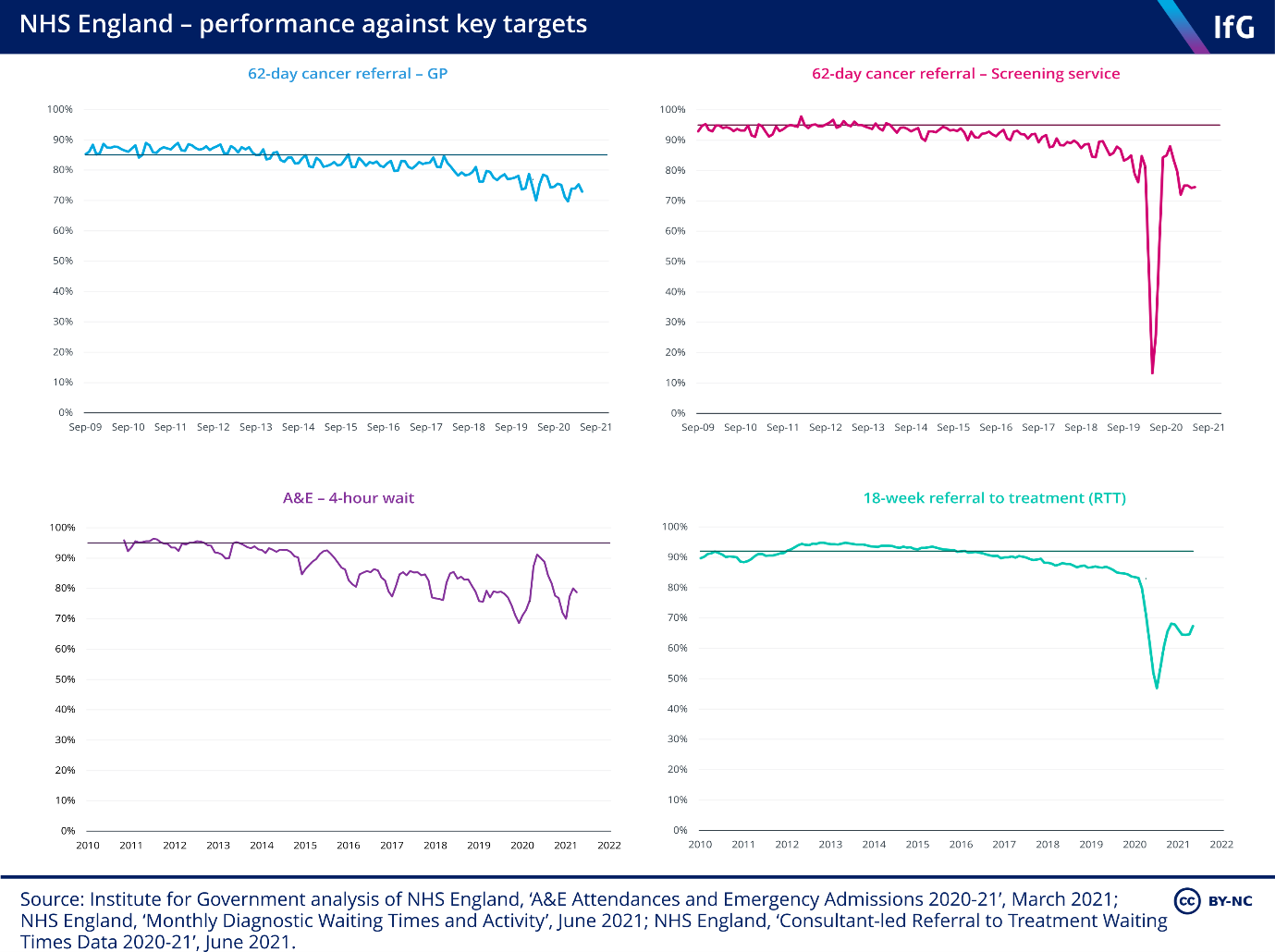 Using targets is risky. They provide powerful incentives, but not always in the way intended. There are endless examples of targets encouraging staff to game the system. In the NHS, this has seen patients being left in ambulances and on trolleys, data being manipulated, and non-targeted appointments being cancelled.

Any new backlogs targets would need to be very carefully designed and regularly reviewed to ensure they have not distorted behaviour in unforeseen ways. It is, for example, not hard to imagine how high-profile new waiting list targets could lead hospitals to discourage GPs from referring patients who might need new treatment to reduce the inflow to waiting lists.

The risk of gaming is higher when targets are poorly calibrated and staff have little hope of meeting them through genuine performance improvements. Unfortunately, any new NHS performance targets would currently involve a huge amount of guess work due to the uncertainties the NHS is facing over how big waiting lists will grow, the spread of future covid variants, and the ongoing impact of heightened infection control regimes on the efficiency of hospitals.

In these circumstances, imposing new targets is tricky, and ministers should be conscious that they could do more harm than good. If the government does proceed, then it must review the targets regularly and ensure that they are backed by a clear analysis of the problems it wants to fix, and resources to solve those problems. This might require action outsde of hospitals – freeing up bedspace by improving discharge to social care provided by local authorities, for example – to improve flow and speed up operations.

Targets have been a useful way to reduce waiting times in the past, but the government shouldn’t expect them to make a big difference if the rest of the backlog plan is underwhelming.