As part of its ambition to ‘level up’ the UK, the government has committed to tackling regional economic inequalities. This is not the first attempt by a UK government to deal with long-standing productivity gaps between regions. February’s Levelling Up the United Kingdom white paper acknowledges “there has been no shortage of attempts to tackle geographic disparities in the UK in the last century” and states that the government needs to learn lessons from the past to ensure that “the right information, incentives and institutions [are in place] to deliver profound change to how decisions are made, where they are made and who makes them”.[1]

IfG research published in 2017 investigated this problem, showing the high degree of policy churn in regional governance, industrial strategy and skills policy – all key parts of the levelling up agenda – by successive governments over many decades. This explainer updates that work, including developments in these policy areas over the past five years and summarising the Institute’s earlier recommendations for how ‘policy churn’ can be reduced. It looks at the following areas:

How has regional economic policy changed in the past decades?

The UK is one of the most centralised advanced economies.[2] However, governments going back decades have made commitments to devolve power to England’s regions and cities, often with the rationale of supporting regional economic growth. This has resulted in many policy documents, programmes and new organisations that have all tried to achieve similar goals: to move power out of Westminster and Whitehall to the regions to drive economic growth. Even the Levelling Up white paper acknowledges this, noting that between 1975 and 2015 there were some 40 different programmes and organisations created with this aim, roughly one every year.

The main development in regional economic policy in recent years has been an expansion of metro mayors and mayoral combined authorities (MCAs), which now cover 40% of the population of England. Previous IfG research to mark the 20th anniversary of devolution in 2019 noted that mayors had been successful in using their convening ‘soft’ power to build local consensus about policy priorities and were effective in channelling funding from central government to local needs. However, there have also been problems with how the MCAs interact with existing institutions. The boundaries of MCAs often overlap with those of Local Enterprise Partnerships (LEPs, business-led partnerships designed to promote local economic development) making close collaboration difficult.

The Levelling Up white paper shows positive signs of a desire to build on existing models rather than to invent new structures. The white paper affirmed the government’s commitment to a mayoral model, proposing nine new county mayoral deals which, if delivered, would mean more than half of England had a directly elected local mayor. 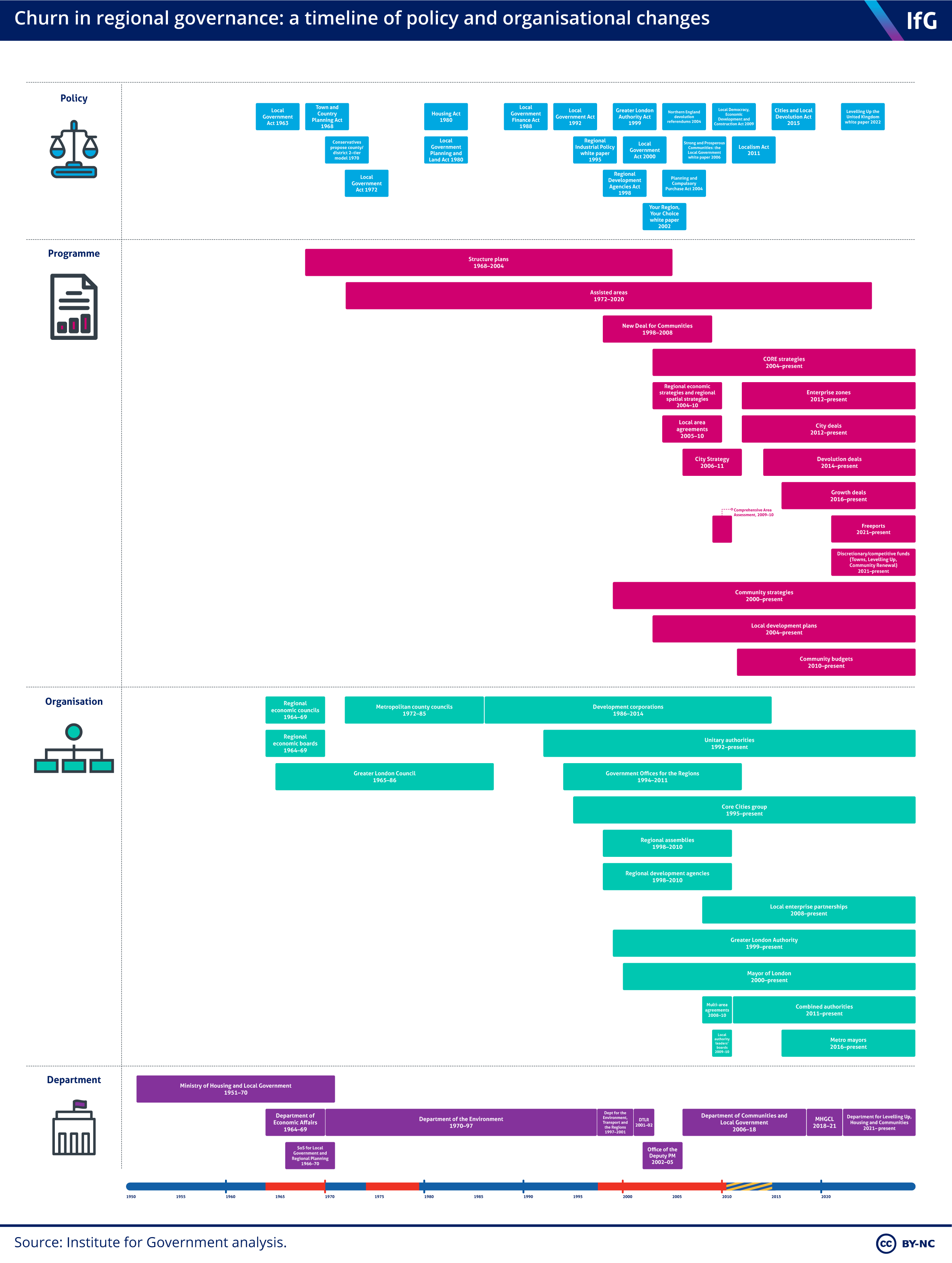 Churn in regional governance: a timeline of policy and organisational changes (Updated: 24 Mar 2022)

How has industrial strategy policy changed in the past decades? 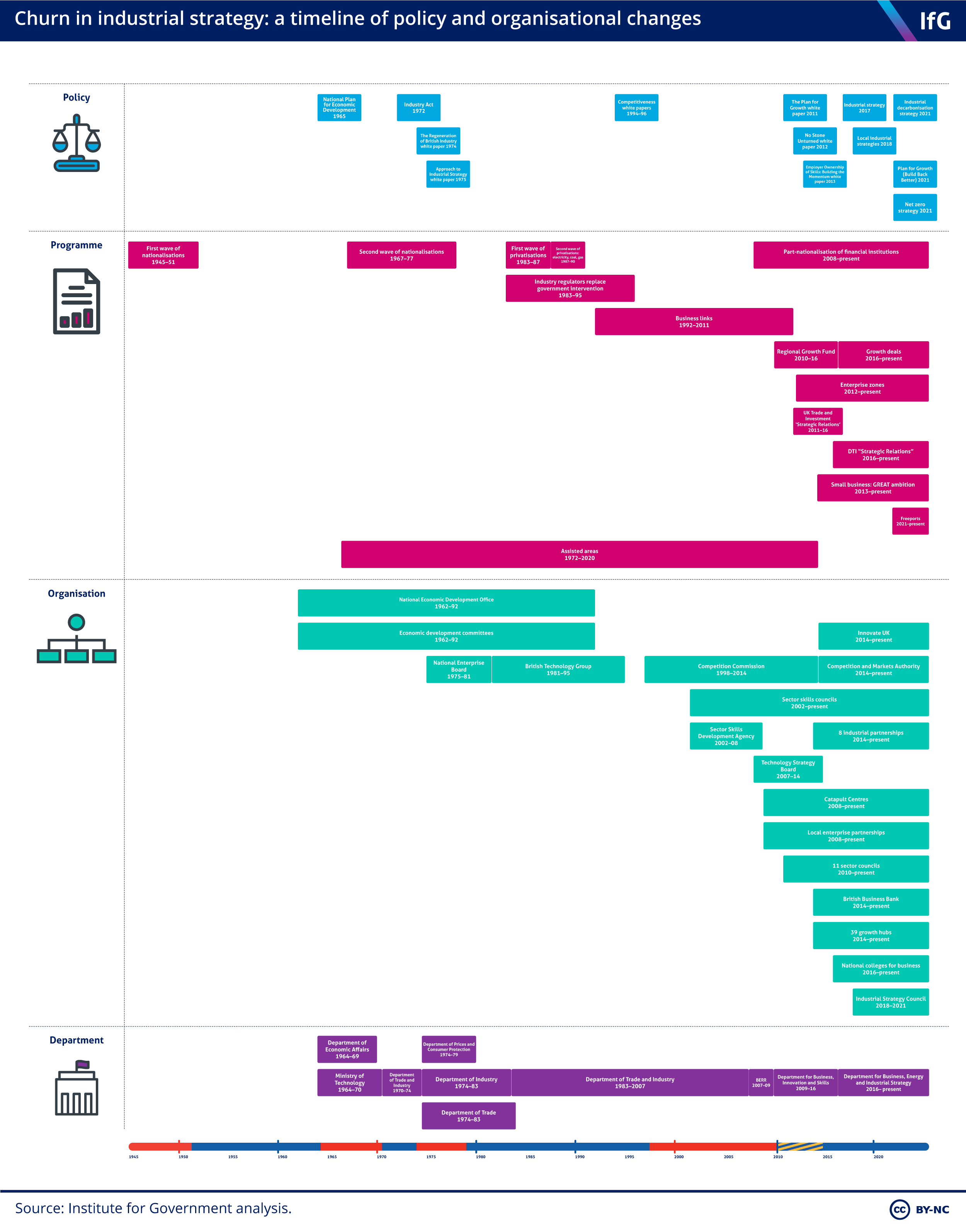 Churn in industrial strategy: a timeline of policy and organisational changes (Updated: 24 Mar 2022)

The government’s role in the economy and the support it provides to the private sector has undergone huge change since the second world war. Although All Change noted that churn in industrial strategy was less severe compared to regional governance and skills policy, there have still been regular changes to the government’s approach and the institutions that deliver it. Most recently, the Johnson government scrapped its predecessor’s 2017 Industrial Strategy white paper and its accompanying advisory council in favour of its new Build Back Better: Our plan for growth in 2021.

This recent change is a good example of policy churn: there are many similarities between the two documents, yet the creation of a new strategy allowed the chancellor to announce something new. A more substantive change is that the Plan for Growth is owned by the Treasury, while the old Industrial Strategy resided in the department for Business, Energy and Industrial Strategy (which, like DLUHC, has itself had many changes in name and responsibilities in past decades). The short-lived Industrial Strategy Council is an example of the lack of institutional memory in this area and the cluttered institutional landscape.

Changes to industrial strategy have often been driven by the personal interests of prime ministers and their relationship to their business ministers. High-profile business secretaries such as Michael Heseltine, Peter Mandelson and Greg Clark have tried to make their mark on industrial strategy policy – though as the IfG noted in 2017 this has resulted in policy churn, with new postholders often making a deliberate attempt to reverse or change the personal priorities of their predecessor. This problem has been exacerbated by the generally short-lived tenures of UK government ministers. 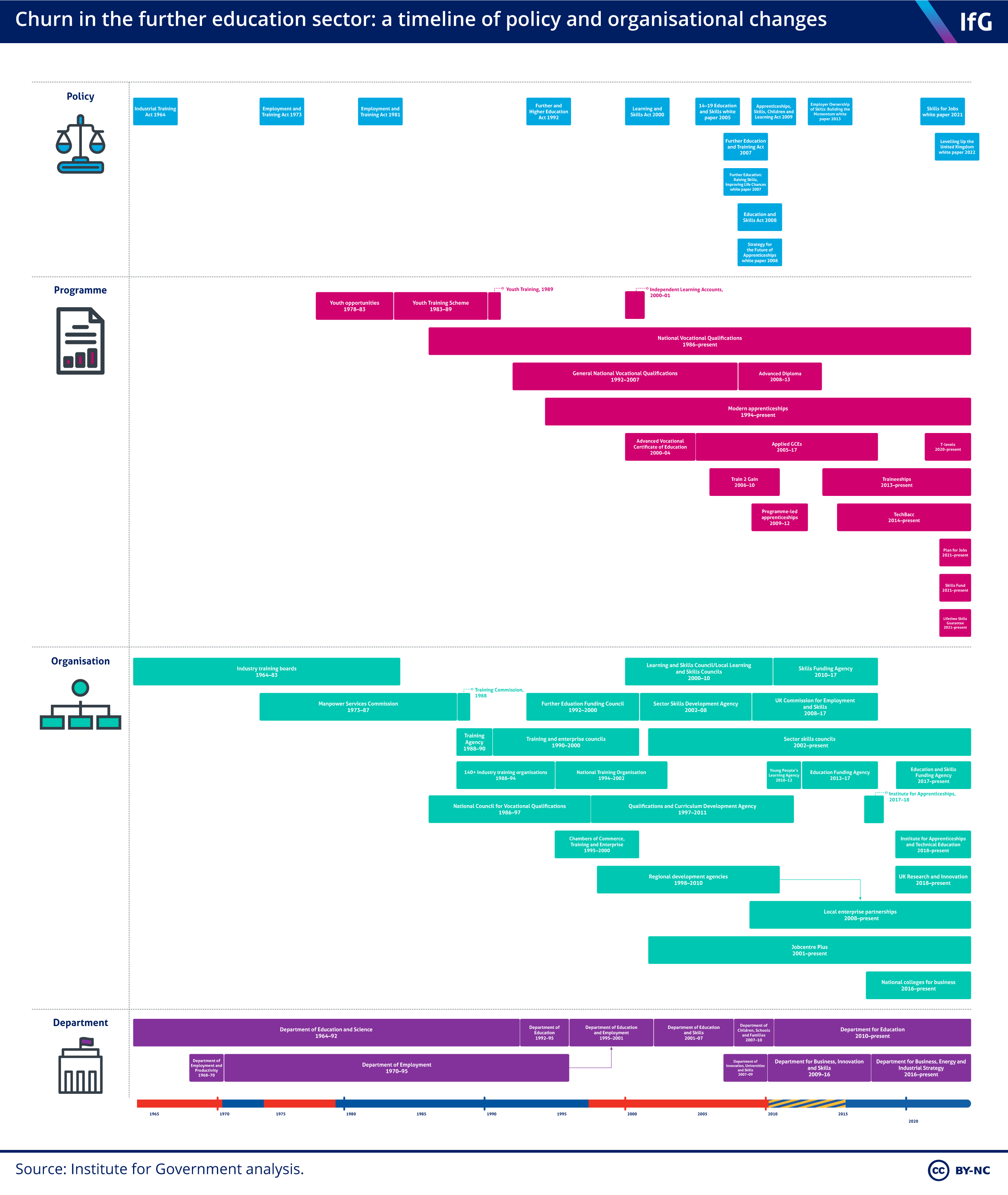 Churn in the further education sector: a timeline of policy and organisational changes (Updated: 24 Mar 2022)

The further education sector provides vocational qualifications and training for 16–24 year olds who do not attend university. Government policy is this area has traditionally tried to ‘upskill’ the labour force to increase economic growth and productivity. All Change noted the severity of policy churn in the sector – by some measures it has been subject to the fastest changing set of institutional arrangements in the developed world.[3] The timelines show that since 1978 there have been 30 different policies or programmes relating to skills introduced by the UK government.

Recent developments have included T-levels, designed to be the vocational equivalent of A-levels. The recovery from the pandemic has also spurred new policies, with the government guaranteeing free training to adults who do not have a level-three qualification (A-level equivalent) as part of its Plan for Jobs.

The high level of churn in skills policy is explained in large part by a lack of political attention. Philip Collins, former speechwriter to Tony Blair, noted in All Change that, “technical education has never been valued as highly as the academic education offered in schools or universities.” This has allowed politicians to continuously meddle with and overhaul the system, often with little resistance.

There are direct financial costs to changing organisations and delivery structures. For example, previous Institute work has found that creating a new department costs at least £15m in the first year alone, and much more than that when also taking into account the temporary disruption to business, logistical challenges and loss of institutional memory.

Creating confusion for individuals and businesses

Other costs in terms of policy impact are likely to be much larger than the direct financial costs, however. An ever-changing policy landscape is a confusing one and makes it harder for businesses and individuals to engage and benefit effectively. For example, in regional policy the uncertain future of LEPs may mean businesses are unsure how far to engage with them. The clearest example is in skills, where employers and employees must navigate a confusing set of differing qualifications that are difficult to compare.

Failing to allow time for policies to take effect

The policy areas covered here are ones for which success will only be seen in the longer term. Improving the skills of the workforce or boosting regional productivity is not a three- or even five-year programme. As a result, many policies and delivery structures are scrapped before they have had an opportunity to succeed and are replaced by similar initiatives that start again rather than building on whatever progress has already been made.

Given these costs, and the thread of continuity in policy aims outlined above, it is perhaps surprising that policies change so often. All Change highlighted several reasons why policy has been so changeable.

Poor institutional memory in government departments – for example, due to civil servants moving role too often – can lead to new organisations or initiatives being created that are similar to previous ones. Officials may not be sufficiently aware of how previous initiatives have worked or whether they have been successful.

Politicians’ desire to be seen to do something

New policy initiatives and organisations can be attractive to politicians as a way of demonstrating progress in a policy area. This is an easier way of making political advances in an area than tweaking existing policies and structures and showing progress through better outcomes over the longer term. It is also a way that politicians can make their mark on an area and try to indicate separation from what went before – for example, the 2021 decision to scrap the 2017 Industrial Strategy and replace it with the (similar) Plan for Growth.

Lack of long-term planning in the centre of government

No.10, the Cabinet Office and the Treasury frequently fail to devote sufficient time and effort to longer-term planning. Without this, there is a tendency to make regular, piecemeal changes rather than to develop a stable and coherent set of policies that are built to last.

Lack of openness and failure to use evidence

Policy making is often too closed and involves insufficient use of evidence and analysis. Without a strong evidential underpinning, policies can lose momentum and favour when political interest wanes.

Reducing the tendency towards changeable policy requires addressing the reasons outlined in the previous section.

All Change recommends the government should designate civil servants in each department to be responsible for institutional memory and enabling promotion within policy areas more easily.

Stronger capacity for strategic planning in the centre

The Levelling Up white paper is an example of the government setting long-term direction. However, the September 2021 reshuffle put responsibility for co-ordinating levelling up in the hands of a line department – DLUHC – rather than in the centre. Past IfG research has noted the difficulty of driving policy across Whitehall from a single department rather than the centre, drawing on the experience of the Brexit department from 2016 to 2020. It is unclear if the ongoing reforms to No.10 and the creation of the Office of the Prime Minister will adequately address this.

The report also recommends that organisational changes – often costly and unnecessary – should be made harder and that policy making should be strengthened so that more analysis underpinning policies is undertaken and published.

How does the Levelling Up white paper propose to reduce policy churn?

The white paper acknowledges that churn has been a problem in these policy areas. It says that its approach to levelling up policy making will be based on five pillars.

These proposals are consistent with much of the diagnosis and recommendations of All Change. In our response to the white paper, we argued that the apparent commitment to building on existing local institutions rather than creating new ones was welcome. However, the long-awaited white paper was stronger on rhetoric than detail – and far more of the latter will be required before the government can put its plans into action, especially regarding how central government will practically change its models for decision making.