Devolution to the Liverpool City Region – The Institute for Government

In November 2015, a ‘devolution deal’ was reached between the UK government and the Liverpool City Region Combined Authority (LCRCA), which six councils in the Liverpool metropolitan area had formed in 2014.

This deal led to the transfer of functions from Whitehall, including over transport, planning, skills and investment. As part of the deal, the LCRCA agreed to the creation of the new post of ‘metro mayor’, who would become the chair of the combined authority.

What is the Liverpool City Region Combined Authority?

The LCRCA was established as a legal entity in April 2014 using powers under the Local Democracy, Economic Development and Construction Act 2009. As a combined authority, it has the ability to take certain collective decisions and exercise delegated functions that cross council boundaries.

The LCRCA has eight members. These include the metro mayor, who chairs the authority, and the leaders of the six constituent local authorities: Halton, Knowsley, Liverpool City, Sefton, St Helens, and Wirral. The eighth member, who has no voting rights, is the chair of the Liverpool City Region Local Enterprise Partnership (LEP).

The Merseyside police and crime commissioner and the chair of Merseytravel, the transport executive for the region, have also both been co-opted as non-voting members.

The total population of the area covered by the LCRCA is 1.6 million.

The Labour Party currently has majority control of five of the six constituent local authorities in the LCRCA. The exception is Wirral, which is Labour-led but has been under no overall control since the party lost its majority in 2019.[1] 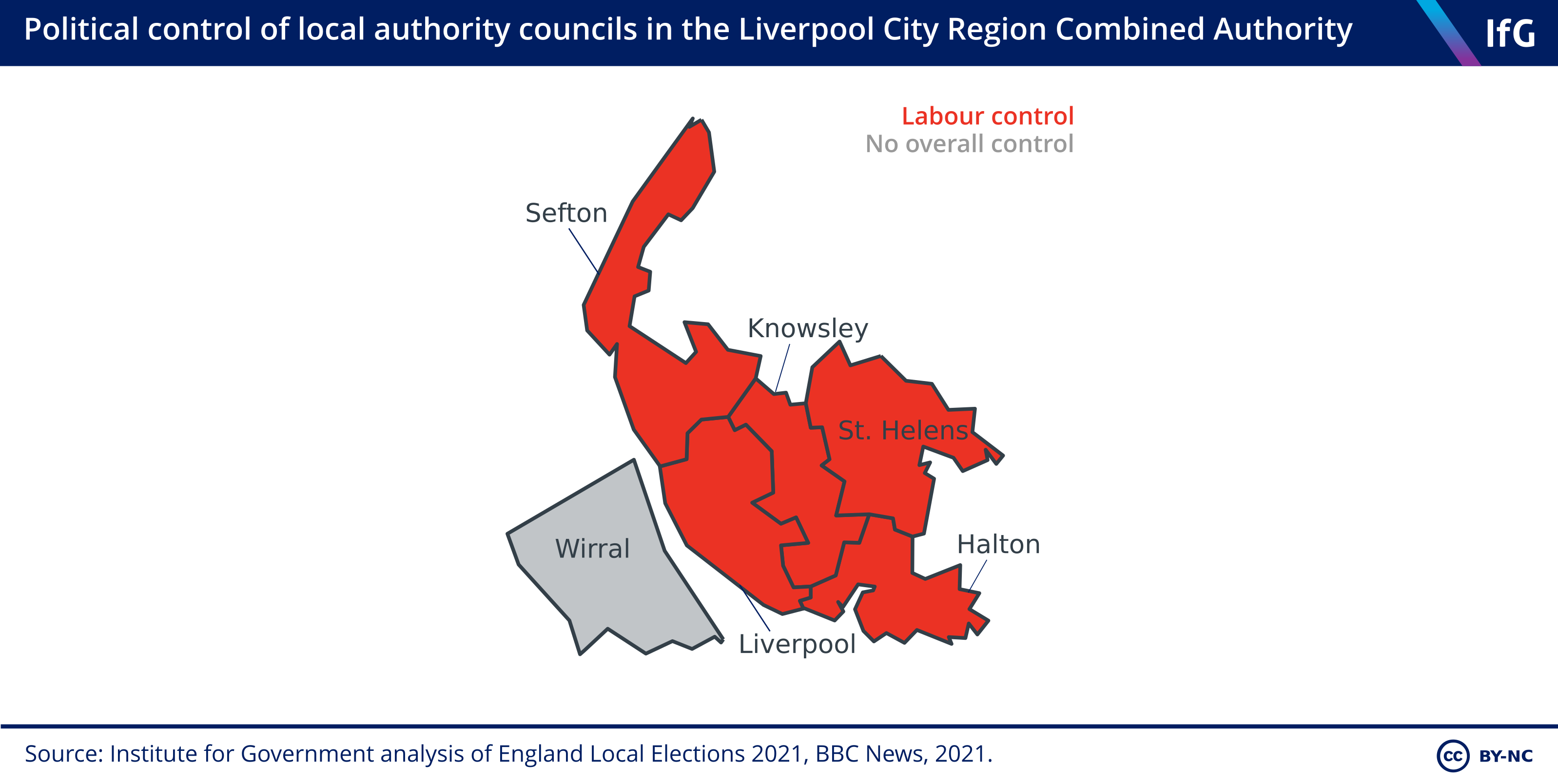 Who is the mayor of the Liverpool City Region?

Rotheram was first elected in May 2017 and re-elected for a second term in May 2021, receiving 58% of first-preference votes. The mayor is elected using the Supplementary Vote system, but since Rotheram received over 50% in the first round, second-preference votes were disregarded.

Rotheram won a majority of first-preference votes in all six constituent local authorities. He received his highest share of votes, 68%, in Knowsley. His lowest vote share came from St Helens, where he won 52%.

The metro mayor is a distinct role from the mayor of the city of Liverpool, who is the directly elected leader of Liverpool City Council. The latter position is currently held by Joanne Anderson, who is one of the six council leaders that sit on the combined authority chaired by the metro mayor. The six local authorities in the region also each has a ceremonial lord mayor.

What are the powers of the mayor and LCRCA?

The powers and responsibilities of the LCRCA and metro mayor are focused on economic functions, including transport, planning, regeneration and skills.

The mayor and combined authority have control of a devolved transport budget and associated transport powers. The LCRCA recently announced plans for bus franchising as part of a wider vision to create a ‘London style’ transport system. Transport powers have also been used to provide discounted travel to groups such as apprentices.

Since August 2019, the LCRCA has been responsible for the 19+ adult education budget, enabling it to develop a skills strategy that fits the needs of the local labour market.

The mayor and combined authority have a devolved investment fund, which it uses to finance infrastructure projects such as an ultrafast broadband network spanning the Liverpool City Region. The mayor also has powers over regeneration including undertaking compulsory purchase orders, with the consent of the local authority in which the site to be purchased is situated.

The mayor is empowered to develop a statutory spatial development strategy for the region, but only with unanimous agreement of all the local councils. For planning applications of ‘strategic importance’ to the region, the combined authority can take on the role of local planning authority. Lastly, they propose the budget and transport plan for the combined authority, but these require the support of two-thirds of the constituent authorities.

What is the LCRCA’s budget?

In 2020/21 the LCRCA’s revenue was £577m. Most of this (69%) comes from central government grants. The transport levy (a further 17% of total revenue) is paid to the LCRCA by its six constituent members, in proportion to their population.

The devolution deal allocated an investment fund worth £900m over 30 years to the LCRCA. This is delivered through annual payments of £30m, subject to five-yearly reviews by the Treasury, the first of which was successfully completed. The payments are not inflation-linked, and so their real value will decline over time. The fund is used to invest in projects to increase regional productivity and growth: 75% of the funding is for capital expenditure and 25% for operations/revenue.

The LCRCA also administers regional capital transport grants, such as money from the Transforming Cities Fund, City Region Sustainable Transport Settlement and some EU structural funds, payments from which will continue to be made until 2023.

During the coronavirus pandemic, the LCRCA was the only combined authority to administer government Covid support grants for local businesses on behalf of its constituent local authorities. 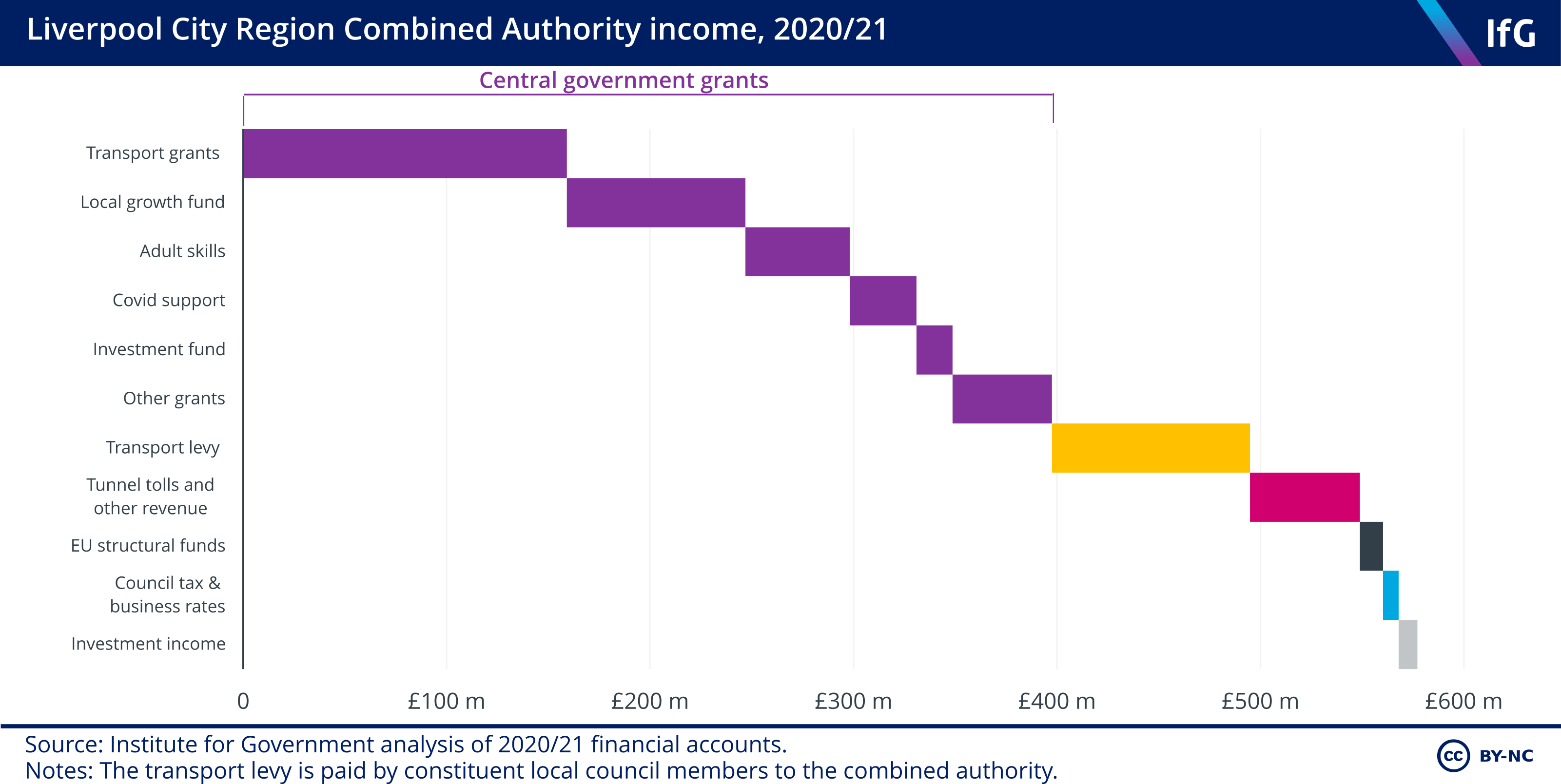 The LCRCA has minimal revenue raising powers. The mayoral precept, which is added to council tax, accounts for just 1.3% of the total revenue of the LCRCA. By contrast, council tax and business rates account on average for just under 30% of revenue of the constituent local authorities that make up the combined authority.

How does the LCRCA compare to the rest of the UK in terms of social and economic outcomes?

There is significant variation between the constituent local authorities on some metrics, such as social mobility and GVA, with at least one local area in the region above the national average. Use of public transport to get to work is high in Liverpool city, but significantly below the UK average in several other members of the combined authority. 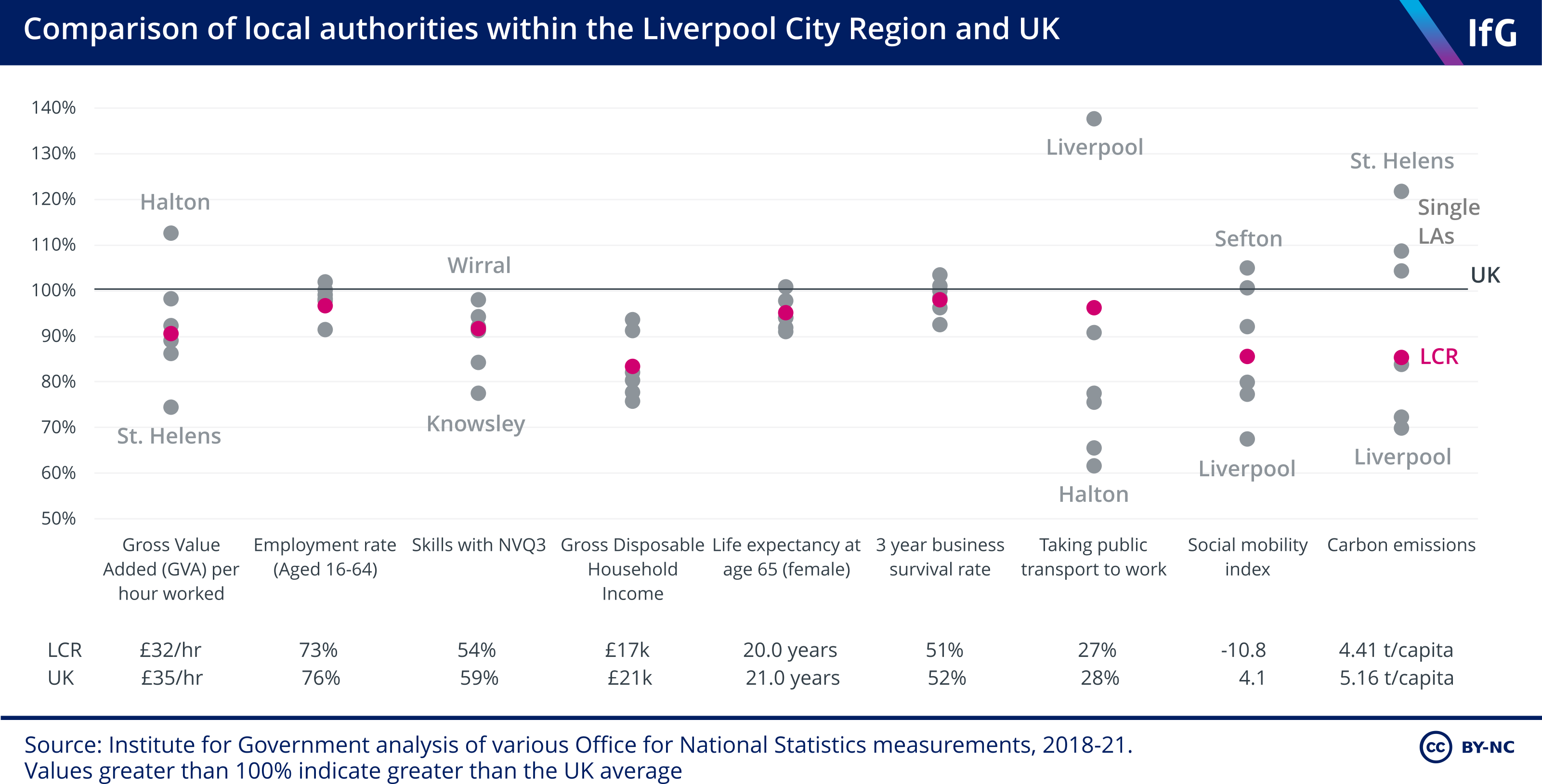 How does the LCRCA area overlap with other administrative boundaries?

The area covered by the LCRCA is coterminous with the Liverpool City Region LEP, but it intersects in complex ways with other local administrative boundaries.

The LCRCA region is covered by one NHS Sustainability and Transformation Partnership (STP): the Cheshire and Merseyside STP. However, it is not coterminous with the LCRCA, since the STP also covers the non-constituent local authorities of Cheshire East, Warrington and Cheshire West and Chester. STPs bring together local authorities and NHS organisations to facilitate the development of ‘place-based’ approaches to the delivery of NHS services in given regions.

Similarly, the LCRCA area is not coterminous with a single police force area: Merseyside Police serves Knowsley, Liverpool, Sefton, St. Helens and Wirral, whilst Cheshire Constabulary serves Halton. In 2005/6, there were proposals to merge the Merseyside and Cheshire police forces, however these plans did not progress.[2] Unlike in some other city-regions, the mayor of Liverpool City Region does not also hold the position of police and crime commissioner. 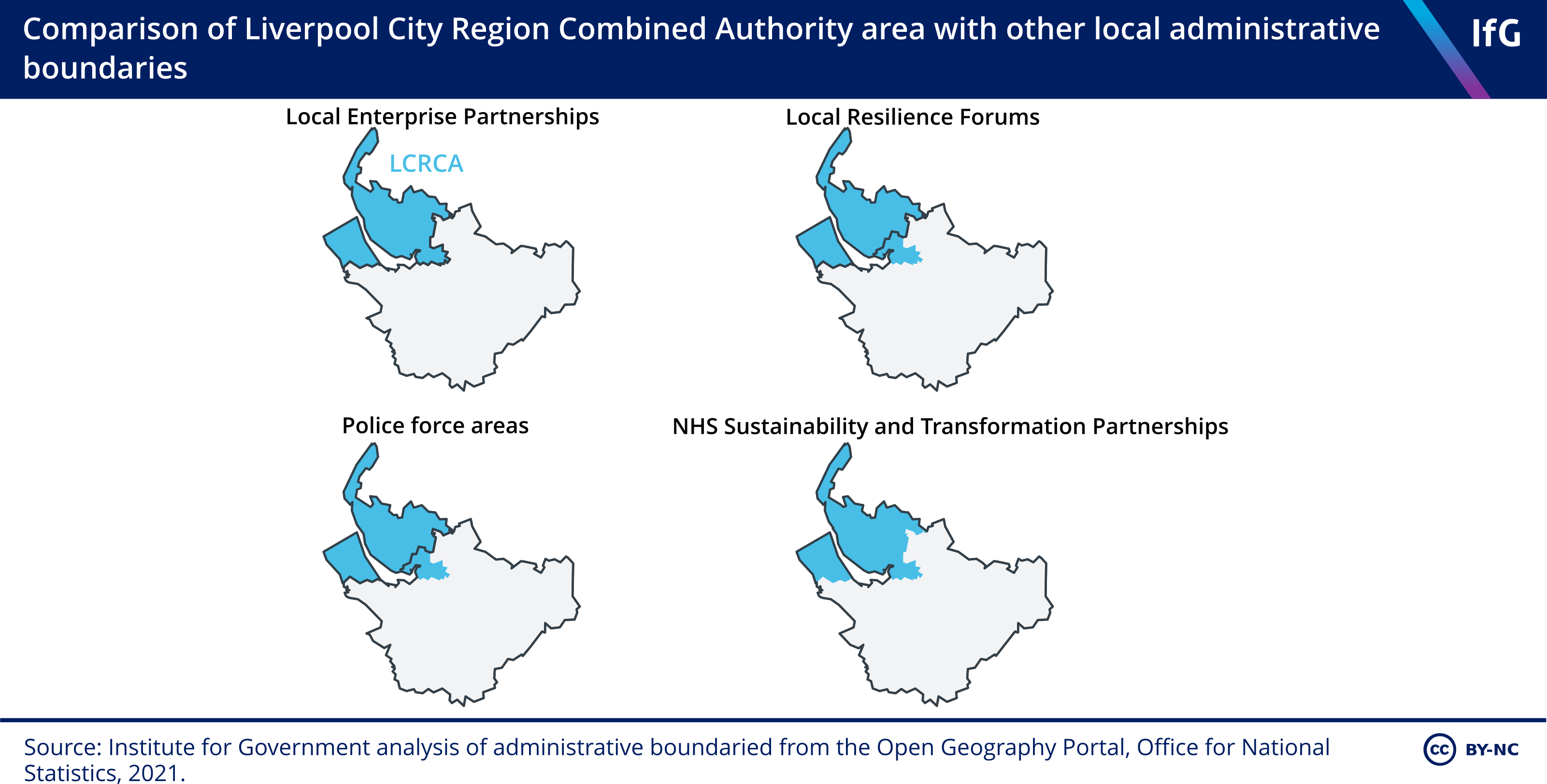