Devolution to West Yorkshire – The Institute for Government

In March 2020, a ‘devolution deal’ was reached between the UK government and the five local council leaders on the West Yorkshire Combined Authority (WYCA).[1] This led to the transfer from Whitehall of a set of powers and to the creation of a new directly elected ‘metro mayor’ of West Yorkshire, who would also become chair of the WYCA.

An addendum to the deal was signed in January 2021. This confirmed that the functions held by the WYCA would also be conferred upon the mayor.[2]

What is the West Yorkshire Combined Authority?

The WYCA was established as a legal entity in April 2014. As a combined authority,it has the ability to take certain collective decisions across council boundaries.

The WYCA has five constituent local authorities: Bradford, Calderdale, Kirklees, Leeds and Wakefield. City of York Council and the Leeds City Region Local Enterprise Partnership (LEP) can also nominate non-voting members of the combined authority. Since May 2021, the combined authority has been chaired by a directly elected metro mayor.

The Labour Party dominates the West Yorkshire region in terms of local authority party control, with majority control of the councils in four of the five constituent authorities. Following the local elections in 2021, Kirklees Council currently has no overall control but is also led by Labour.[3]

Who is the mayor of West Yorkshire?

The mayor of West Yorkshire is Tracy Brabin. She represents the Labour Party and was first elected in May 2021, becoming the first woman to be elected as a metro mayor anywhere in the country.[4]

The election used the supplementary vote system. Since no candidate won over 50% in the first round, the top two candidates proceeded to a second round, with second preferences redistributed from eliminated candidates. In the second round, Brabin won 60% of the vote and was duly elected. West Yorkshire’s next mayoral election is scheduled to take place in May 2024. 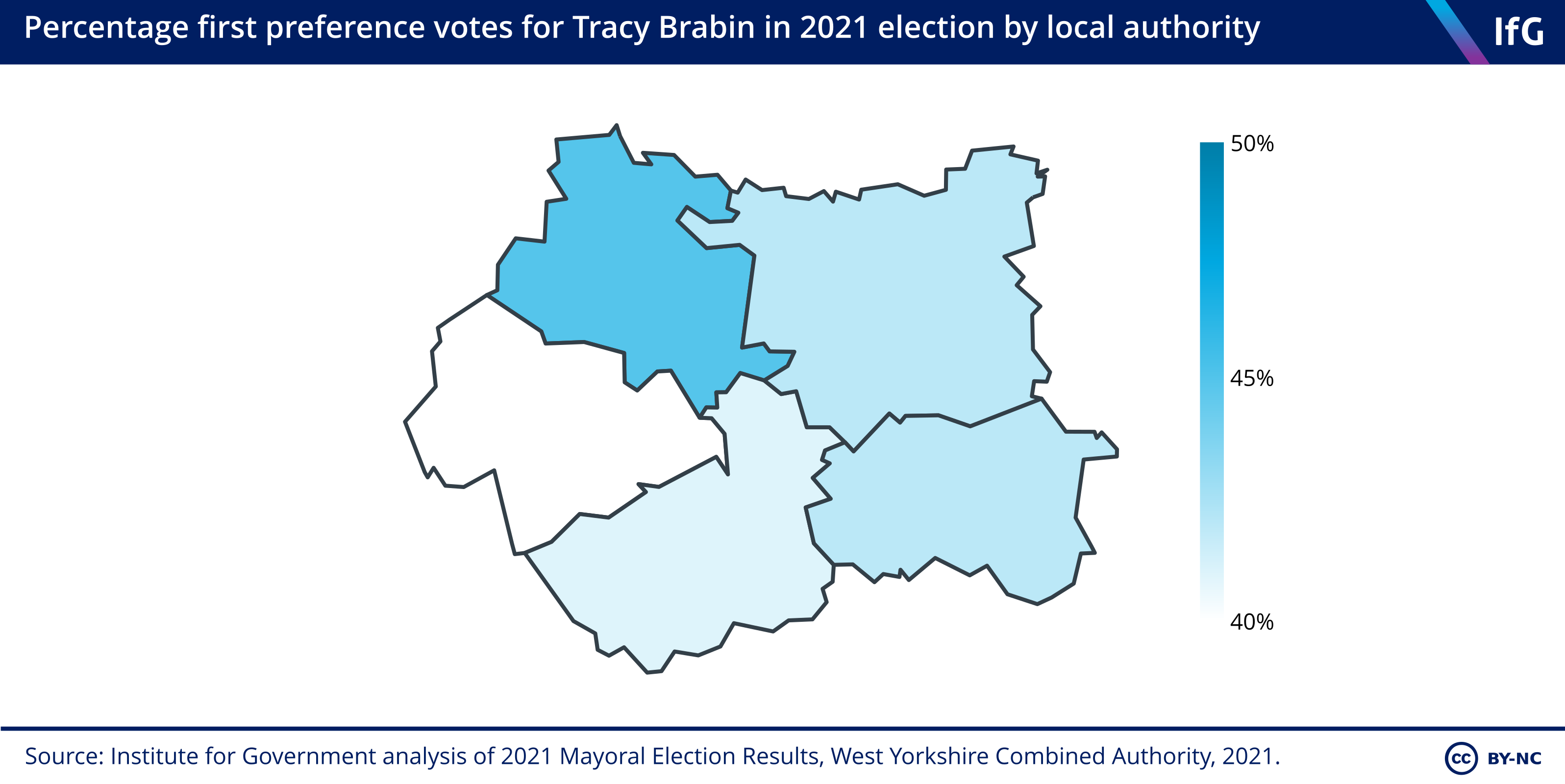 What powers do the mayor and the WYCA hold?

The main powers and responsibilities of the WYCA and metro mayor relate to transport, adult education and skills, housing, economic development and policing.

The WYCA and metro mayor have control of a devolved transport budget and recently published a Bus Service Improvement Plan, which Brabin described as “a major step towards my pledge to bring buses back under public control, introduce simpler fares, contactless ticketing and safer, greener buses”. A longer-term objective is to raise the funding to build a mass transit system for the region.

In August 2021, the WYCA became responsible for the region’s £65m19+ adult education budget, which the authority intends to use to benefit the 380,000 people in the region who have low or no qualifications. The authority also works with the Leeds City Region LEP to deliver other skills and business support programmes.

The mayor can exercise strategic planning powers, including undertaking compulsory purchase orders. However, the consent of the constituent authority where the site is situated is still required. The mayor and the WYCA also have the power to create mayoral development areas to support economic regeneration. Additionally, the mayor has the power to pay grants for exercising highway functions and to bus operators.

The mayor has few executive powers that she can exercise unilaterally. Most decisions must be approved by the WYCA constituent authorities; some must receive unanimous support.

In May 2021, the powers of the police and crime commissioner for West Yorkshire were transferred to the mayor. These powers include the ability to appoint the chief constable, set the budget and determine local policing priorities.

What is the WYCA’s budget?

The devolution deal allocated an investment fund worth up to £1.14bn over 30 years to the WYCA. This is delivered through annual payments of £38m, subject to five-yearly reviews by the Treasury. The payments are not inflation-linked, and so their real value will decline over time. The fund is used to invest in projects to increase regional productivity and growth: 25% of the funding is for capital expenditure and 75% for operations/revenue.

The majority of the WYCA funding comes from central government grants, for instance from the Transforming Cities Fund (£132.7m), Local Transport Capital Funding (£71m) and Growth Deal Funding (£48.3m). Another important source of funding is the transport levy (£92.5m), which is paid to the WYCA by its five constituent members, in proportion to their population.

How does the WYCA compare to the rest of the UK in terms of social and economic outcomes?

West Yorkshire is below the national average on many key economic and social indicators including labour productivity, skills and social mobility, although there is substantial variation within the region itself. Leeds, for instance, is above average in terms of the skills of its population and close to the UK average in productivity.

Aside from Leeds, all parts of the region are also well below average in terms of the share of the population who commute using public transport. 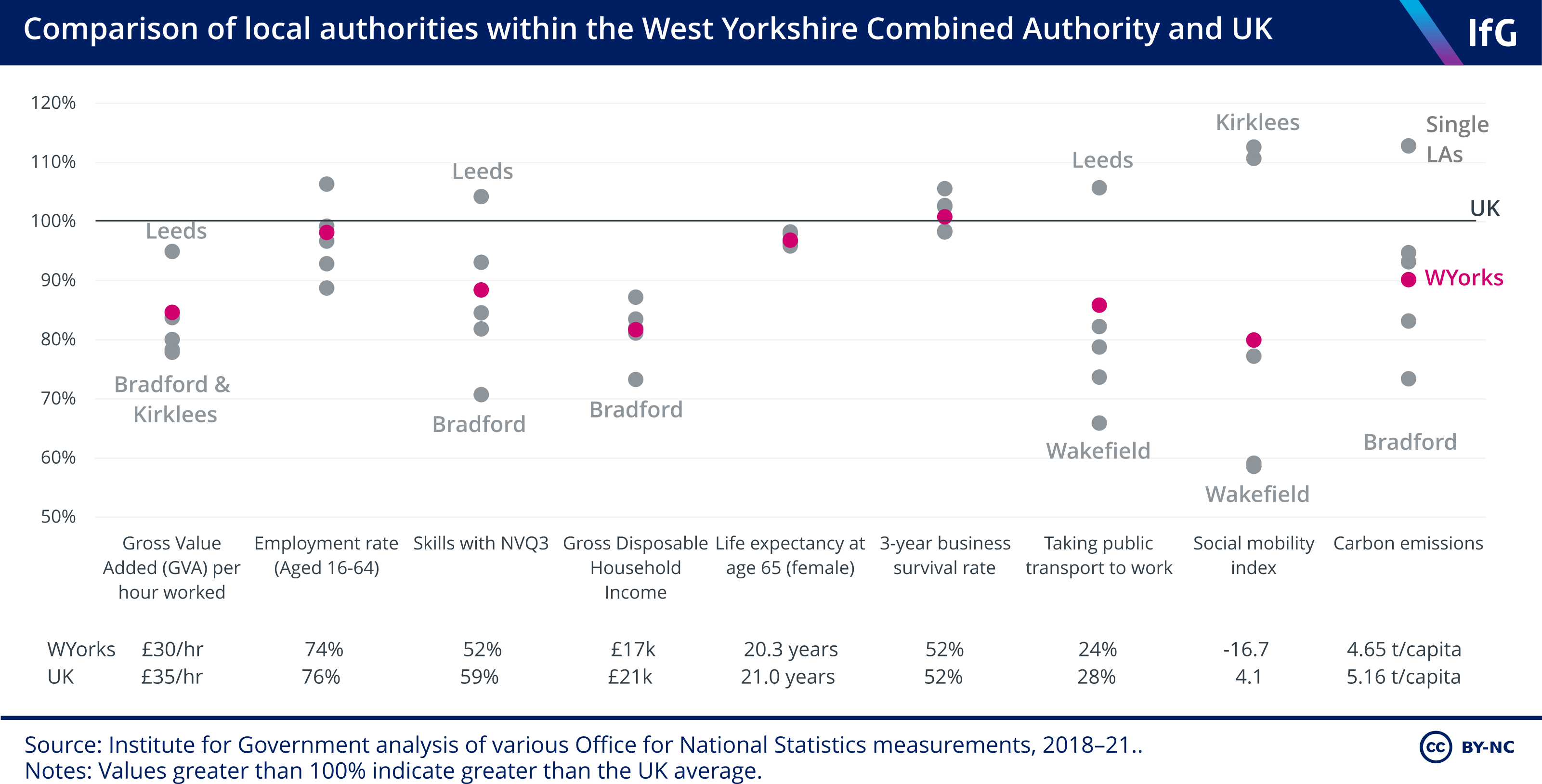 In terms of labour productivity, a key metric for the government’s levelling up agenda, West Yorkshire has improved its performance since 2010, but not as quickly as the UK as a whole. In 2010, Gross Value Added per hour worked stood at 90% of the UK average. By 2019, this had fallen to 86%. 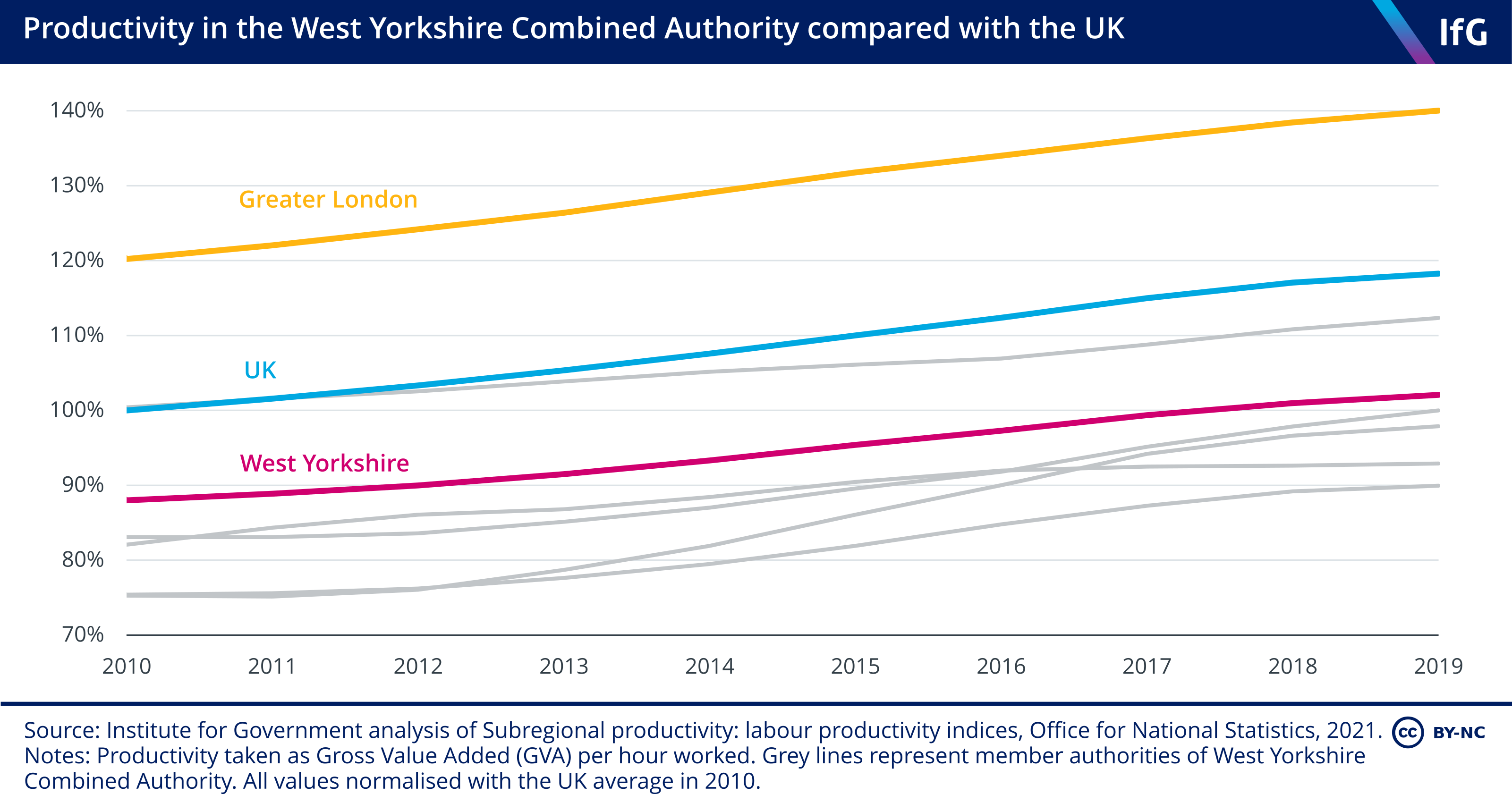 Productivity in the West Yorkshire Combined Authority compared with the UK (Updated: 14 Mar 2022)

How does the WYCA area overlap with other administrative boundaries?

In comparison to other mayoral combined authority (MCA) regions, the WYCA is generally well aligned with other administrative boundaries. For example, the area covered by the WYCA is coterminous with the Leeds City Region LEP and the West Yorkshire police force area, which enabled the police and crime commissioner functions to be merged with those of the mayor.

The WYCA region is covered by one NHS sustainability and transformation plan (STP): the West Yorkshire and Harrogate STP. STPs bring together local authorities and NHS organisations to facilitate the development of ‘place-based’ approaches to the delivery of NHS services in given regions. However, it is not coterminous with the WYCA, since the STP also includes the area covered by Harrogate Council, which is not a constituent council of the WYCA.