Devolution to South Yorkshire – The Institute for Government

In June 2020, parliament approved a ‘devolution deal’ that led to the transfer of certain powers and funding from Westminster to South Yorkshire’s directly elected ‘metro mayor’ and combined authority.[1]

What is the South Yorkshire Mayoral Combined Authority?

The combined authority was established as a legal entity in April 2014 and has four constituent councils: Barnsley, Doncaster, Rotheram and Sheffield. As a combined authority, it gained the ability to take certain collective decisions across council boundaries.

Following its creation, agreement on a devolution deal for the area was reached between its four constituent local authorities and the UK government in October 2015. This led to the adoption of a directly elected mayor and subsequent mayoral election in May 2018.

Although political leaders agreed the deal in October 2015, parliament did not approve the devolution of powers and funding until June 2020. The process was delayed as Barnsley and Doncaster initially voted for a wider ‘One Yorkshire’ deal, rather than just a South Yorkshire one.[2]

Five local authorities are non-constituent members of the combined authority: Bassetlaw, Chesterfield, North East Derbyshire, Derbyshire Dales and Bolsover. These members only have voting rights on certain issues relating to the wider region when constituent members resolve to give them a vote on these matters at the start of a SYMCA meeting.

The Labour Party is the dominant political party in the region, controlling three of the four constituent councils. Sheffield currently has no overall control after Labour lost its majority at the 2021 local election.[3]

Who is the mayor of South Yorkshire?

The current mayor of South Yorkshire is Dan Jarvis. He represents the Labour Party and was elected in May 2018, receiving 47% of first-preference votes.

The election used the supplementary vote system. Since no candidate won over 50% in the first round, the top two candidates proceeded to a second round, with second preferences redistributed from eliminated candidates. In the second round, Jarvis won 74% of the vote.

Jarvis received his highest share of first-preference votes, 68%, in Barnsley. His weakest support came from Sheffield (43%). Only residents of the four constituent local authorities can vote in the mayoral election.

Jarvis is also Labour MP for Barnsley Central, a position he has held since 2011. In 2021, Jarvis announced that he would not stand for re-election in 2022, and would instead return to being a full-time MP.

Who are the candidates in the 2022 South Yorkshire mayoral election?

The next election for the position of mayor of South Yorkshire will take place on 5 May 2022.

What powers do the mayor and SYMCA hold?

The powers and responsibilities devolved to SYMCA and the metro mayor are focused on economic functions, including transport, infrastructure, business support, skills and planning.

On transport, SYMCA controls a consolidated, devolved budget covering local public transport, roads and active travel networks. The authority is currently seeking to use devolved powers to take control of the local bus system via a franchising scheme. SYMCA is also responsible for the devolved 19+ adult education budget (AEB).

There is also a devolved power to create mayoral development areas to support economic regeneration. This requires the consent of the constituent council in which the area would be situated.

The mayor has the power to set a mayoral council tax precept (although Jarvis has not done so) and has limited borrowing powers.[5] They can exercise strategic planning powers, including undertaking compulsory purchase orders, with the consent of the constituent authority where the site is situated.

Generally, SYMCA decisions must be approved by a majority or 75% of SYMCA constituent authorities. Some decisions, such as the agreement of a statutory spatial framework, require unanimous support from constituent councils.

What is the SYMCA’s budget?

In 2020/21 the SYMCA’s budget was £225m. Most of this (73%) came from central government grants. The transport levy (24%) is paid to the SYMCA by its four constituent members, in proportion to their population.

The approval of the devolution deal in June 2020 unlocked an investment fund worth £900m over 30 years to the SYMCA. This will be delivered through annual payments of £30m, subject to five-yearly reviews by the Treasury. The first payment was made in the 2021/22 financial year. 2021/22 is also the first financial year that the SYMCA will receive money for adult education (£37.5m).

During the pandemic, the SYMCA was one of only two combined authorities, alongside the Liverpool City Region, to administer government Covid support grants for local businesses on behalf of its constituent local authorities. 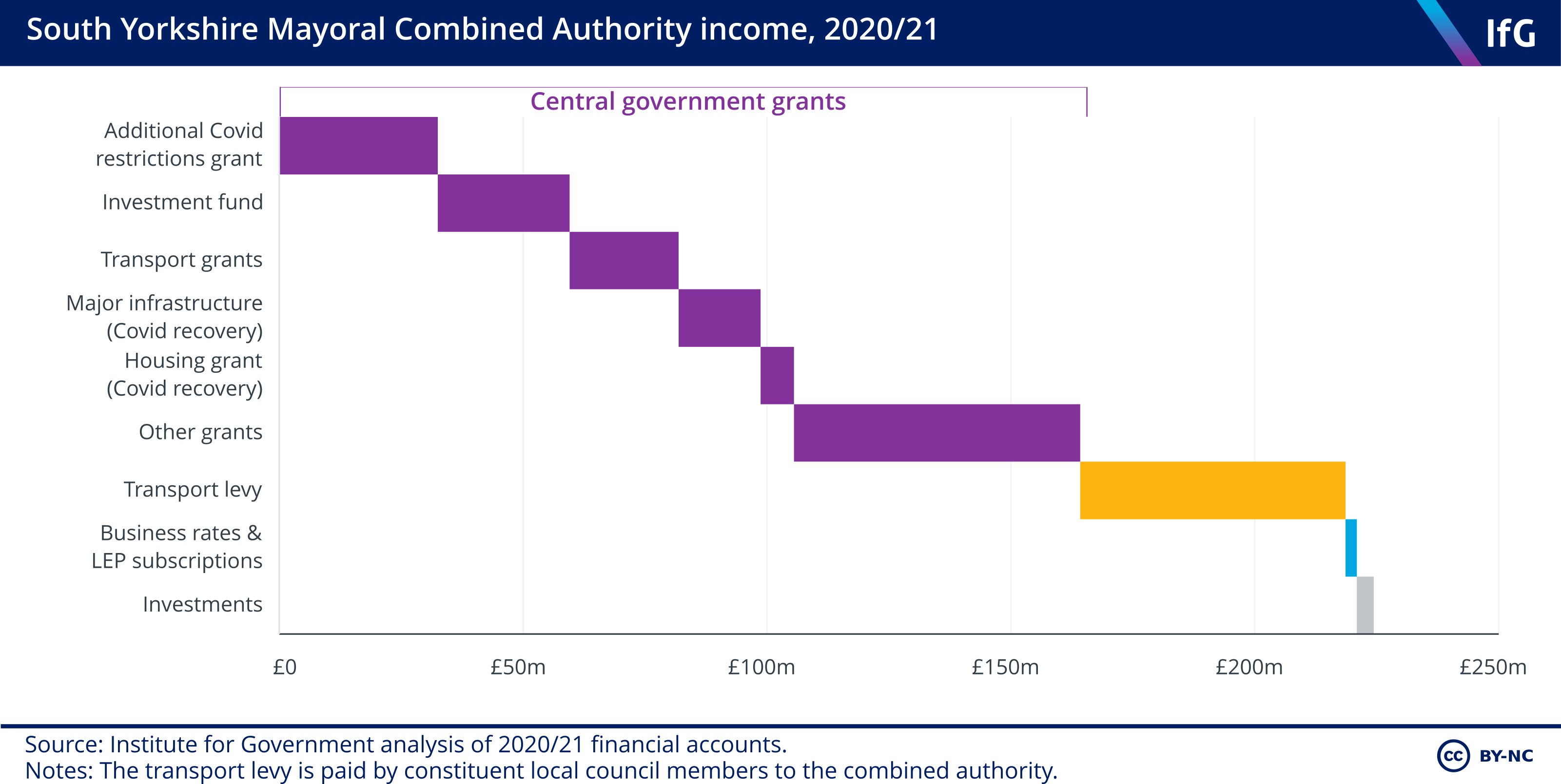 The SYMCA can apply a council tax precept, but does not currently do so. In addition to the transport levy, in 2020/21 the combined authority received £1.13m in business rates income and £1.18m in local enterprise zone subscriptions from its constituent authorities. By contrast, the constituent authorities receive 30–40% of their income from council tax and business rates. 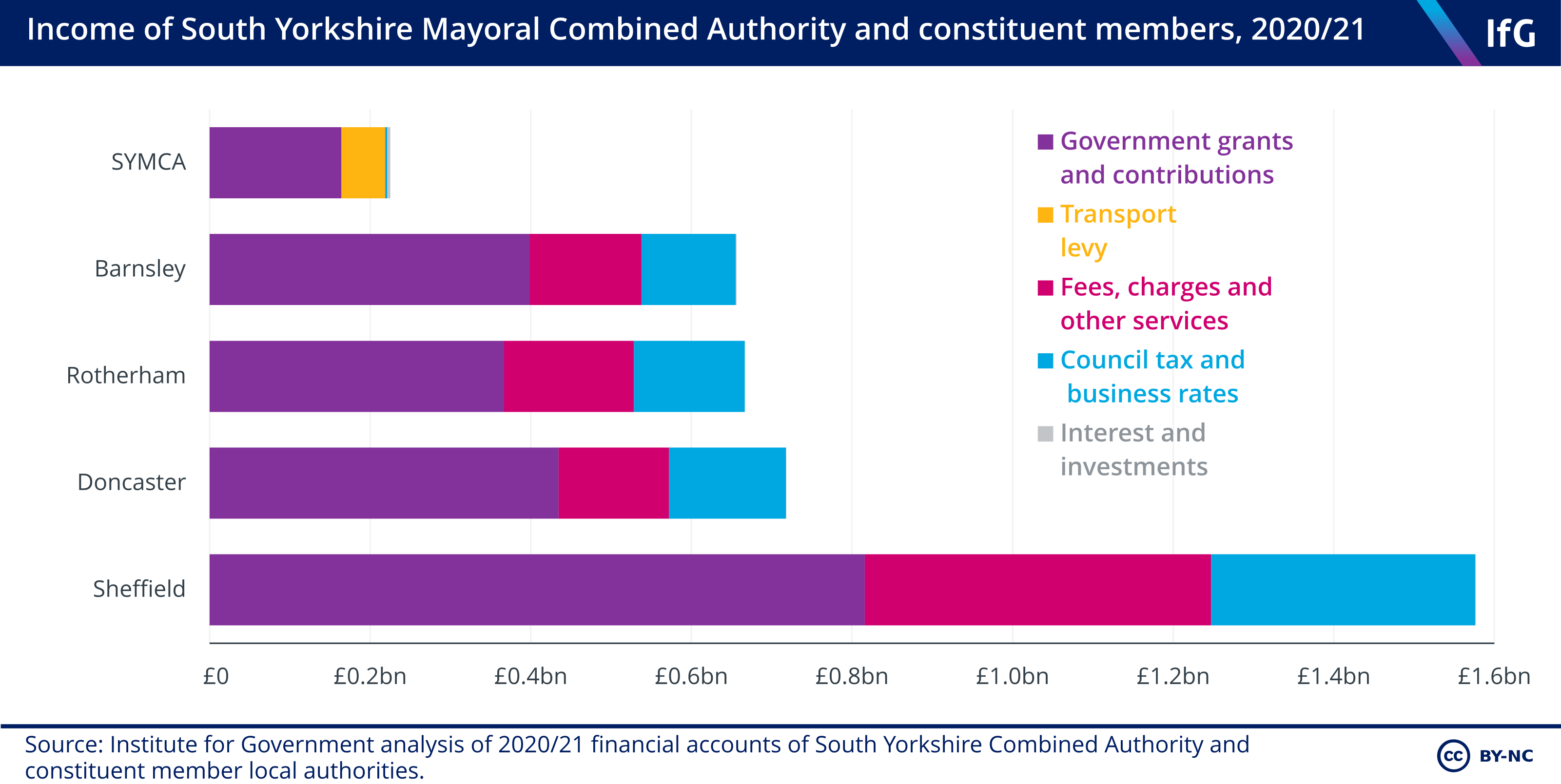 How does the SYMCA compare to the rest of the UK in terms of social and economic outcomes?

South Yorkshire performs comparatively poorly on many key social and economic metrics. In terms of labour productivity (GVA per hour) and gross household income, the region is about 20% below the UK average. In terms of social mobility, it is even further behind (71%).

The region is close to the UK average in terms of the skills of its population, although there is substantial variation between the region on this indicator. The region is also more dependent on cars, reflecting the lower-than-average use of public transport to get to work, other than in Sheffield.

How does the SYMCA area overlap with other administrative boundaries?

Unlike some other mayoral combined authority regions, the geography of the SYMCA is generally coterminous with other administrative boundaries. For example, the SYMCA is coterminous with the South Yorkshire Local Enterprise Partnership (LEP), which was created in 2012. Until 2020, the LEP geography covered a wider region which included the non-constituent councils of the SYMCA, however the UK government changed these boundaries in 2020.[6]

The SYMCA area is coterminous with a single police force area: South Yorkshire Police. Unlike in some other city-regions, the mayor of South Yorkshire does not also hold the position of police and crime commissioner.