The Department for Education (DfE) has terminated its contract with global HR services firm Randstad, which in 2021 won the bid for the National Tutoring Programme (NTP). The NTP, which sought to use tutoring to help pupils who had fallen behind during the pandemic catch up with their peers, was beset by failures from the start. Just 25% of the targeted tuition partner courses had started by the end of the Easter term,[1] while Randstad abandoned its target to reach 65% of children eligible for the pupil premium. Perhaps most damning, it encouraged schools to run tuition sessions without pupils in them.[2]

While questions will rightly be raised about Randstad’s performance, the episode also shows that government has still not fully learnt the lessons from Carillion and other contracting failures.

The government is still focused on cost over quality

The collapse of Carillion four years ago was primarily the result of corporate greed, but government contributed to it by focusing excessively on low prices without properly considering quality or the company’s ability to meet its contractual obligations. Institute for Government research has shown that this is common in procurement failures. Government itself recognises these problems. Its Sourcing Playbook, first published in the wake of Carillion, states that “encouraging the market to compete on price alone can create false economies and unhealthy markets and should be avoided”.[3] Instead, it recommends that departments should try to “secure the best mix of quality and effectiveness for the least outlay”.[4]

These warnings were not heeded with the NTP. DfE awarded the contract to Randstad on a bid of £25m[5] – only 40% of the £62m the department had made available.[6] The only other bidder was the Education Endowment Foundation (EEF), who ran the programme in the 2020/21 academic year, who allegedly bid up to £10m more than Randstad[7] – still substantially below the DfE’s budget. DfE, then still headed by Gavin (now Lord) Williamson, chose to award the contract to Randstad despite its lack of experience in the area. As a HR firm Randstad had experience in placing staff in schools but had never run a tutoring programme. In contrast, the EEF’s role as an education charity meant it had long focused on closing the attainment gap in schools.

DfE went with the cheap option, in what looks to be a ‘penny-wise but pound-foolish’ decision. It has been estimated that lost learning from the pandemic could lead to £100bn of lost tax revenue,[8] not to mention the human cost to the lives of millions of children. Both surely outweigh any extra cost of an effectively administered catch-up tutoring programme.

Big national contracts are not always the answer

In response to Carillion the government asserted a greater focus on the delivery model assessment – whether it should deliver something itself, outsource it wholly or take a hybrid approach. There’s a place for big national contracts but they are often aren’t the best solution. This lesson too seems not to have been learnt: throughout the pandemic, the government’s instinct has been to centralise and outsource, even where other parts of the public sector would be better placed to deliver. When schools closed, for instance, DfE opted to deliver school meals through a national food voucher programme, outsourced via a huge contract to Edenred, a supplier with little relevant experience who struggled to meet demand. In contrast, the evidence suggests that the approach used by Scottish and Welsh governments of providing money directly to local councils, charities and community groups – who had pre-existing relationships with and understanding of local communities – was better at getting food to those who needed it quickly.

DfE has now belatedly taken this approach with the tutoring programme. It has announced that it will give money directly to schools to organise their own tutoring from September 2022. This makes sense. The ‘tuition partner pillar’ – directly administered by Randstad – has reached only 25% of its target, and the vast majority of the courses have been provided by schools anyway. Given the relative success of school-led tutoring and that there were calls to pass funding directly to schools from the outset:[9] the government should explain now and in full why it decided not to pursue this approach from the start. Then, perhaps, the government can start learning from its mistakes. 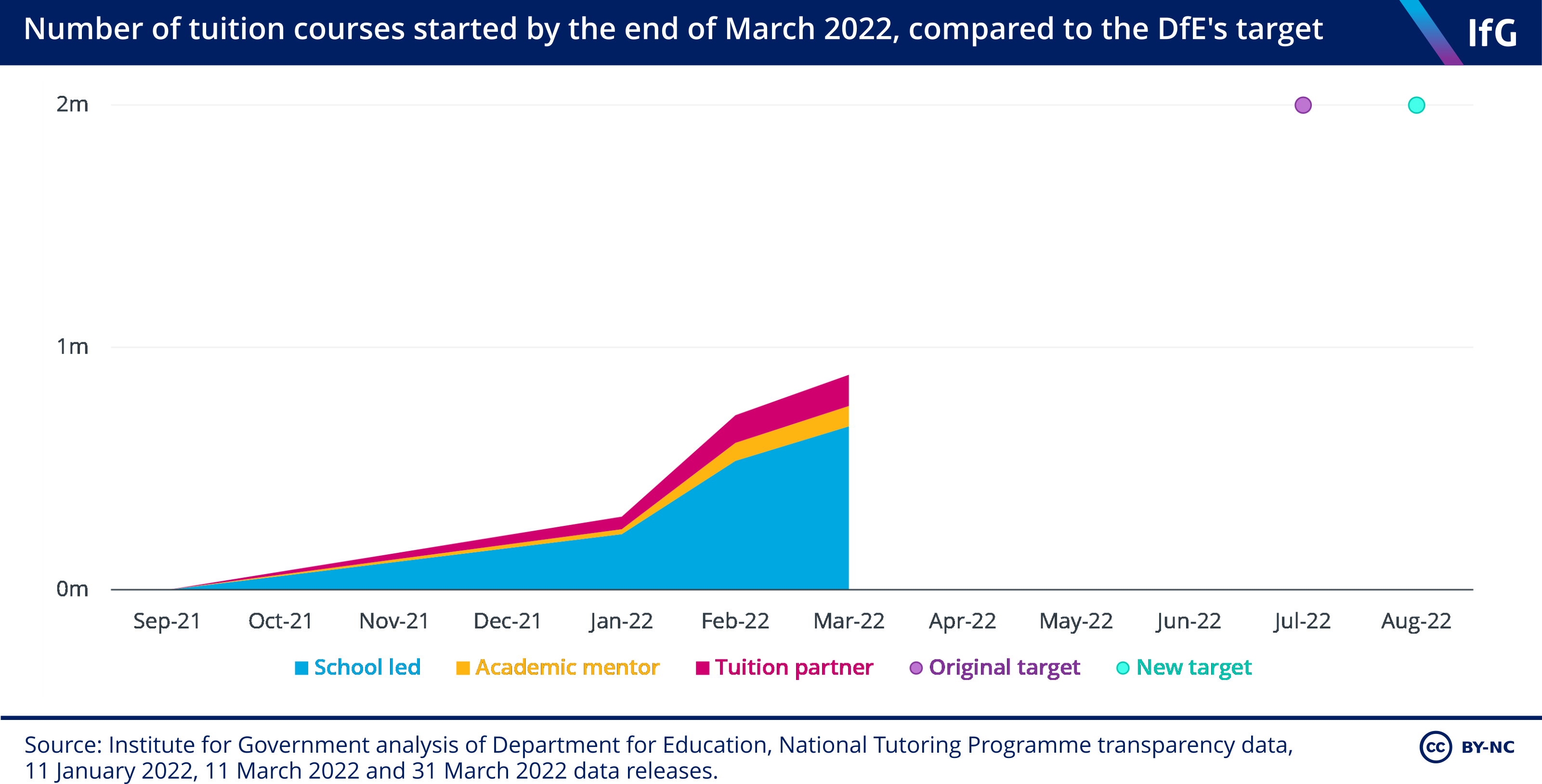