Staff turnover in the civil service – The Institute for Government

What is staff turnover?

Staff turnover is the proportion of employees who leave an organisation over a given period of time, expressed as a percentage of the total workforce.

How high is staff turnover in the civil service? 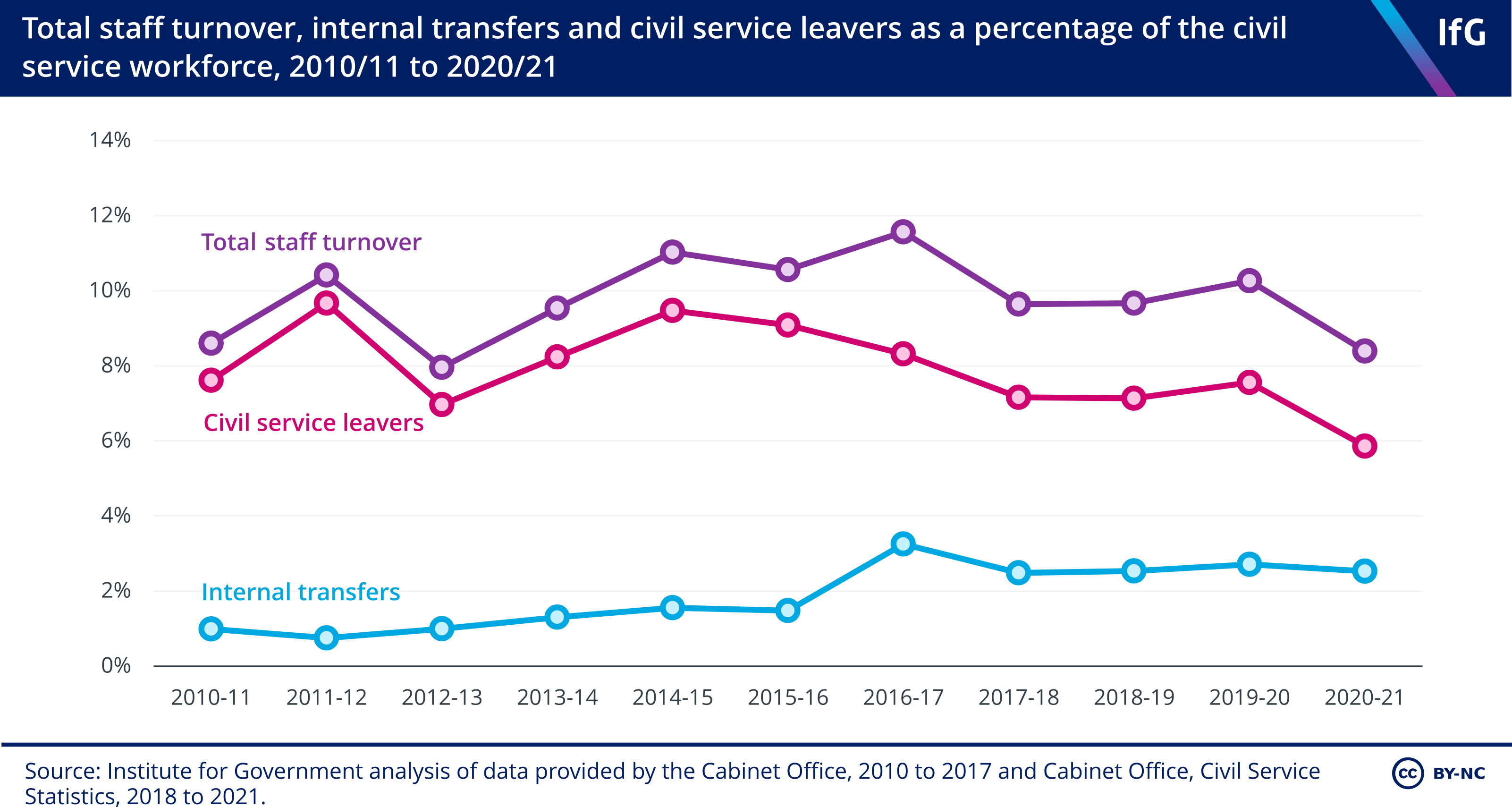 This reduction is part of a wider trend across the public sector during the pandemic. For example, turnover of social workers also decreased over 2020/21, by nearly 2%.[2] This is probably the result of economic uncertainty associated with the pandemic, which led to fewer job opportunities and incentivised people to remain in stable employment, rather than a reaction to specific government or civil service initiatives. 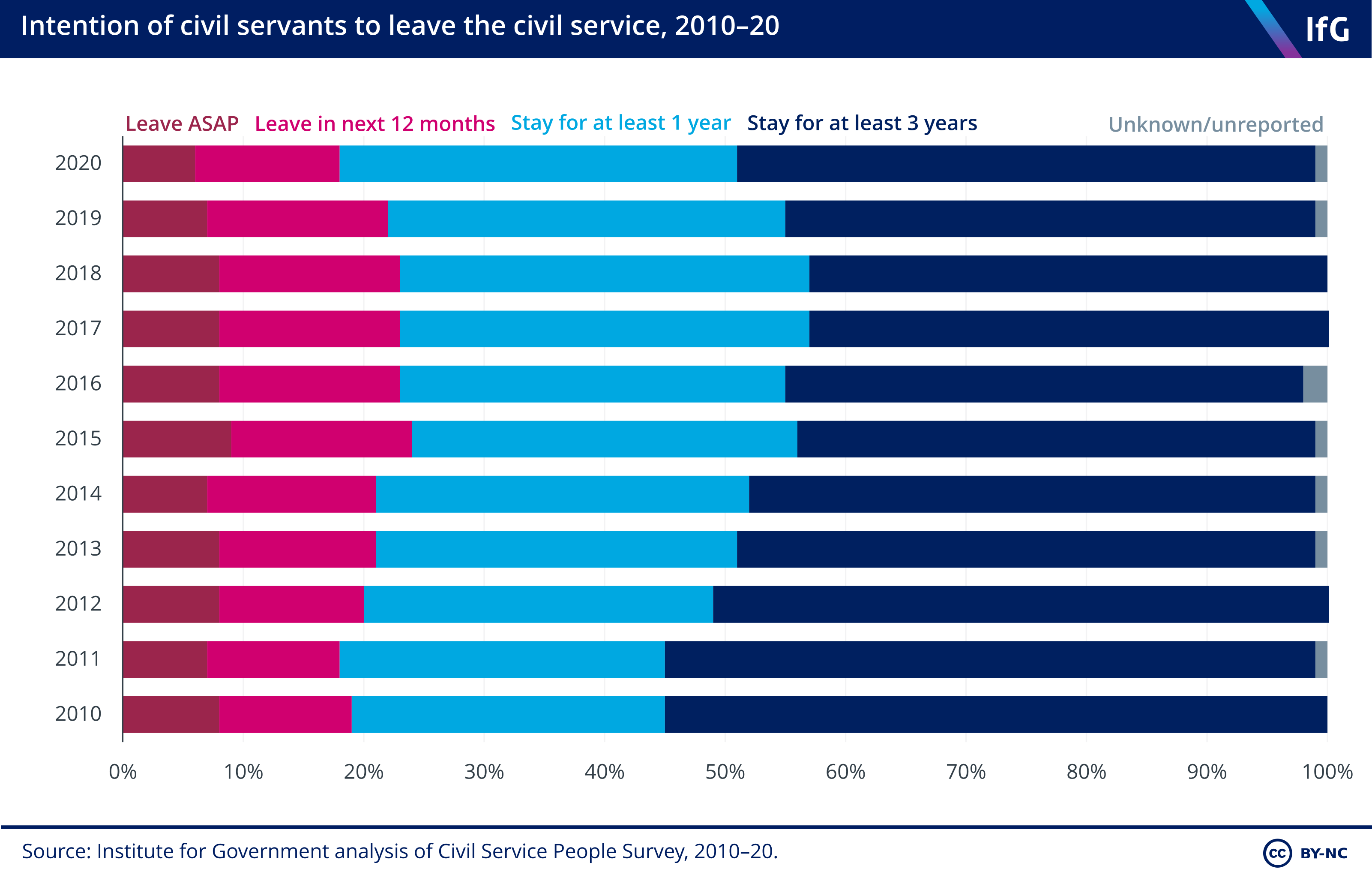 The reduction in staff turnover seen during the pandemic is unlikely to last in the long term. The government should assume that at some stage civil servants will become more willing to move roles again, reversing this trend.

What proportion of staff turnover is due to civil servants moving between different departments?

In 2020/21, about a third of staff turnover was due to officials moving between different departments within the civil service.

Internal turnover has remained consistent at around 2.5% since 2017/18. This is slightly lower than its peak in 2016/17, which was associated with organisational changes following the EU referendum, such as the creation of new Brexit and international trade departments.

Internal turnover has more than doubled over the last decade. In 2010/11 only 1% of the civil service workforce left for an internal role.

But these figures are a major under-estimate of civil service internal movement, because they only record internal transfers between departments and functions, not the far higher number of transfers that happen within departments, for which there is no publicly available data.

How does staff turnover vary between departments?

Bigger, operational departments tend to have lower turnover, and particularly lower internal turnover, than smaller, policy-focused departments. For example, the Home Office, Department for Work and Pensions and the Ministry of Defence all have total turnover lower than 10%. In contrast, the Cabinet Office, DCMS, DIT and DLUHC each have total turnover higher than 15%, the median (2019) turnover in UK private sector services organisations.[3] 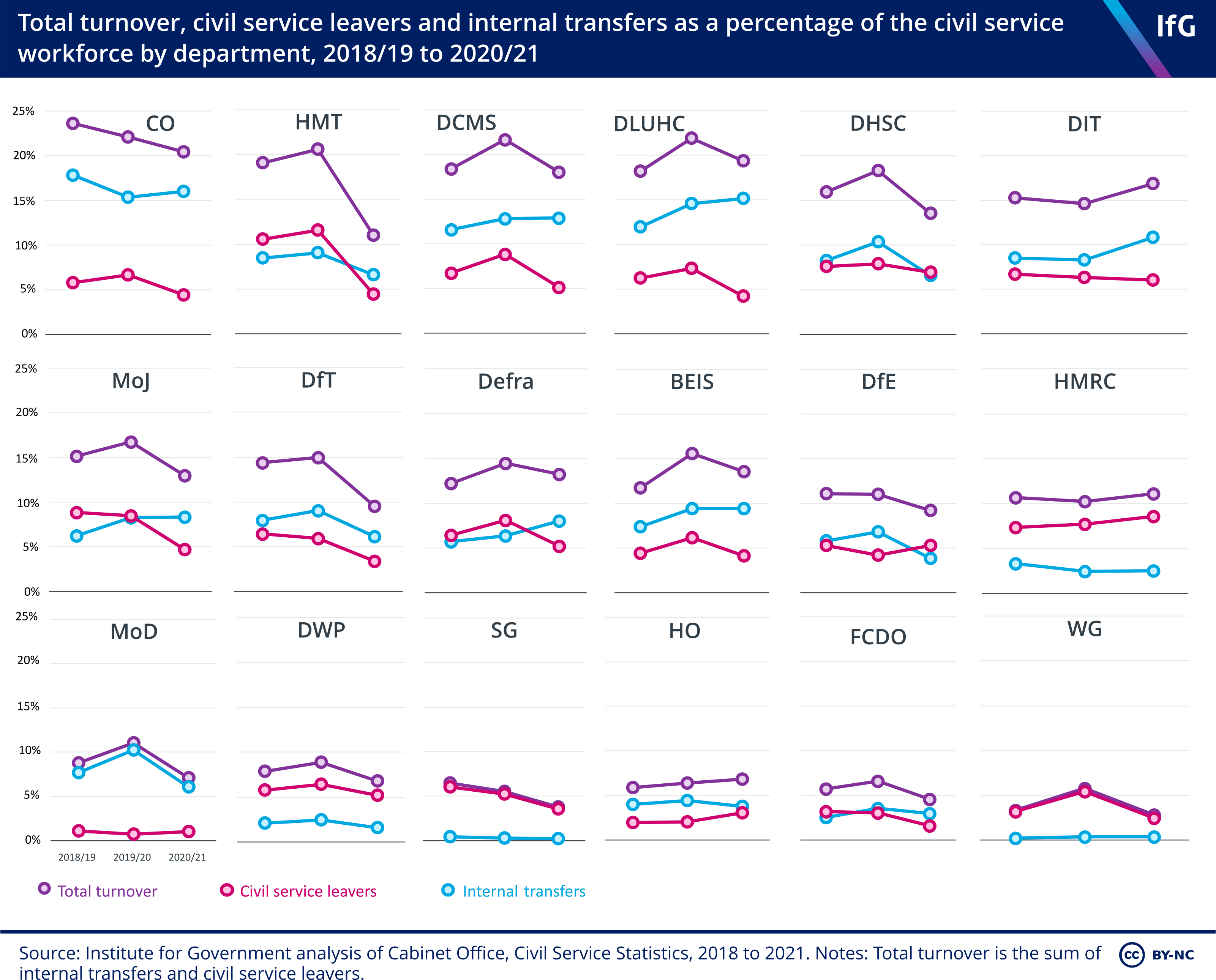 Total turnover, civil service leavers and internal transfers as a percentage of the civil service workforce by department (Updated: 13 Apr 2022)

Total turnover halved at the Treasury (HMT) in 2020/21, from approximately 20% to just over 10%. While it had the second highest turnover of the major departments in 2018/19, in the latest figures it ranks around the middle of the pack. This is promising, as the lack of staffing continuity in the Treasury hinders its ability to oversee departmental spending with a strategic, long-term view, and to effectively steward key areas of the economy.

The Cabinet Office lost around a fifth of its workforce in 2020/21. About three quarters of this was staff moving between departments and functions within the wider civil service.

Why does staff turnover vary between departments?

Smaller, policy-focused departments such the Cabinet Office, DCMS and DLUHC tend to have higher turnover than bigger, operational departments such as MoD, DWP and the Home Office. This may be because staff working in policy roles tend to move between departments and policy areas within the civil service more frequently than those in operational and administrative roles.

Smaller, policy-focused departments also tend to be in London, making it easier for civil servants to transfer from one to the other. For instance, in March 2021, 96% of DCMS’s staff were based in the capital, as were 97% of Treasury staff. Civil servants who work for bigger operational departments like DWP and HMRC are dispersed more evenly across the UK. The civil service in the Scottish and Welsh governments has almost no internal staff turnover at all, suggesting that the location of civil servants, and their work for different governments, affects the internal movement of staff.

What is the civil service doing to manage staff turnover?

Government has recognised excessive turnover as a problem for parts of the civil service since at least the 1968 Fulton report.[4] The Civil Service Reform Plan 2012 acknowledged it a major problem, and the civil service Workforce Plan 2016–2020 said it must ‘ensure people are encouraged to develop deep expertise, not move too frequently from job to job’.[5]

In 2021, the Cabinet Office included addressing the turnover of permanent civil service staff in its Declaration on Government Reform and as a key metric in its Outcome Delivery Plan.[6] To help with this the government plans to implement capability-based pay from April 2022, starting with the senior civil service. However, while pay influences high staff turnover, other factors such as prospects for promotion are also important.[7]

Some government ‘functions’ have started to achieve significant improvements in workforce management. For instance, the project delivery function has worked with the Major Projects Authority to successfully reduce turnover of senior responsible owners of projects. Most functions have now published ‘career pathways’ – frameworks which provide clear information about career development, roles and skills to help staff to plan their careers in more structured ways.