Devolution to the North of Tyne  – The Institute for Government

In November 2018, a ‘devolution deal’ was reached between the UK government and the leaders of Newcastle, North Tyneside and Northumberland councils. This deal led to the transfer from Whitehall of a set of powers and the creation of a new directly elected ‘metro mayor’ and combined authority in the North of Tyne region.

What is the history of devolution to the North East?

There have been several attempts to devolve power to the North East since the abolition of Tyne & Wear County Council in 1986.

In 2004, the Labour government held a referendum on an elected assembly for the much larger North East region, which was rejected by voters, and this form of regional devolution was abandoned.

In 2014, the three councils that now form the North of Tyne Combined Authority (NTCA), along with Durham, Gateshead, South Tyneside and Sunderland, established the non-mayoral North East Combined Authority (NECA). A devolution deal was then negotiated, which would have led to the election of a metro mayor for the entire NECA. However, this deal was rejected by local leaders.

Newcastle, North Tyneside and Northumberland instead concluded the NTCA deal that was implemented in 2019, with the election of a metro mayor for this smaller region. The other four councils remained in the non-mayoral NECA, without any form of devolution deal.

In its Levelling Up white paper, the government announced plans to create a larger mayoral combined authority (MCA) in the region.[1] This could cover the constituent authorities of the NTCA, as well as Gateshead, South Tyneside and Sunderland. Durham is line to negotiate a separate county deal.

What is the North of Tyne Combined Authority?

The NTCA was established as a legal entity in November 2018. As a combined authority, it has the ability to take certain collective decisions across council boundaries.

It has three constituent local authorities: Newcastle, North Tyneside and Northumberland. The NTCA cabinet is comprised of the mayor, two representatives of each constituent council and a representative of the North East Local Enterprise Partnership (LEP). The mayoral ambassador for the voluntary, community and social enterprise sector is also a non-voting observer.

Since May 2019, the combined authority has been chaired by a directly elected metro mayor. 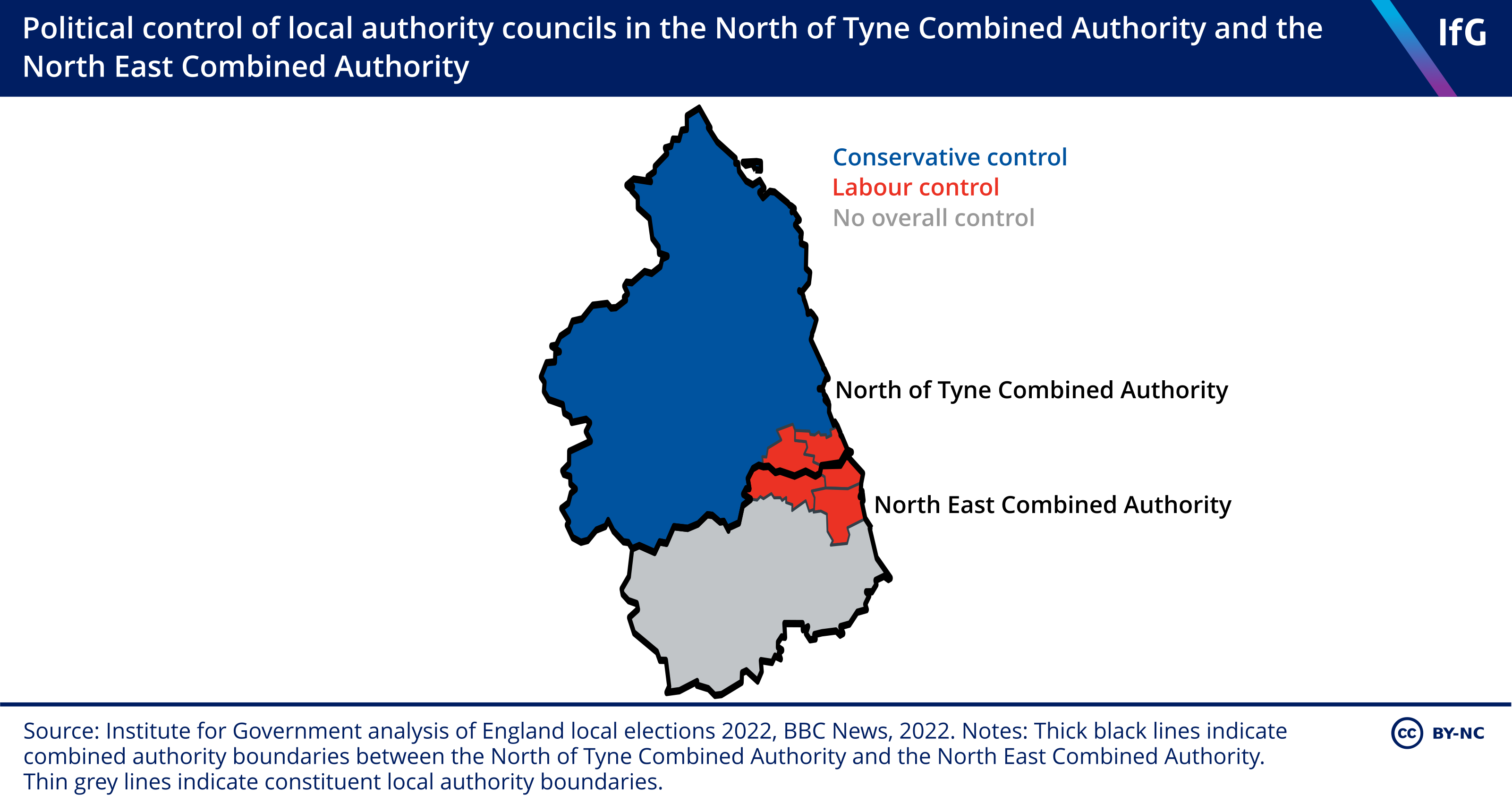 The total population of the area covered by the NTCA is approximately 830,000.

Who is the mayor of the North of Tyne?

The mayor of the North of Tyne is Jamie Driscoll (Labour and Cooperative Party).

At his election in May 2019, Driscoll won 34% of first-preference votes, his highest share coming from Newcastle (40%) and his lowest (25%) from Northumberland.

The election used the supplementary vote system. Since no candidate won over 50% in the first round, the top two candidates proceeded to a second round, with second preferences redistributed from eliminated candidates. In the second round, Driscoll won 56% of the vote and was duly elected. 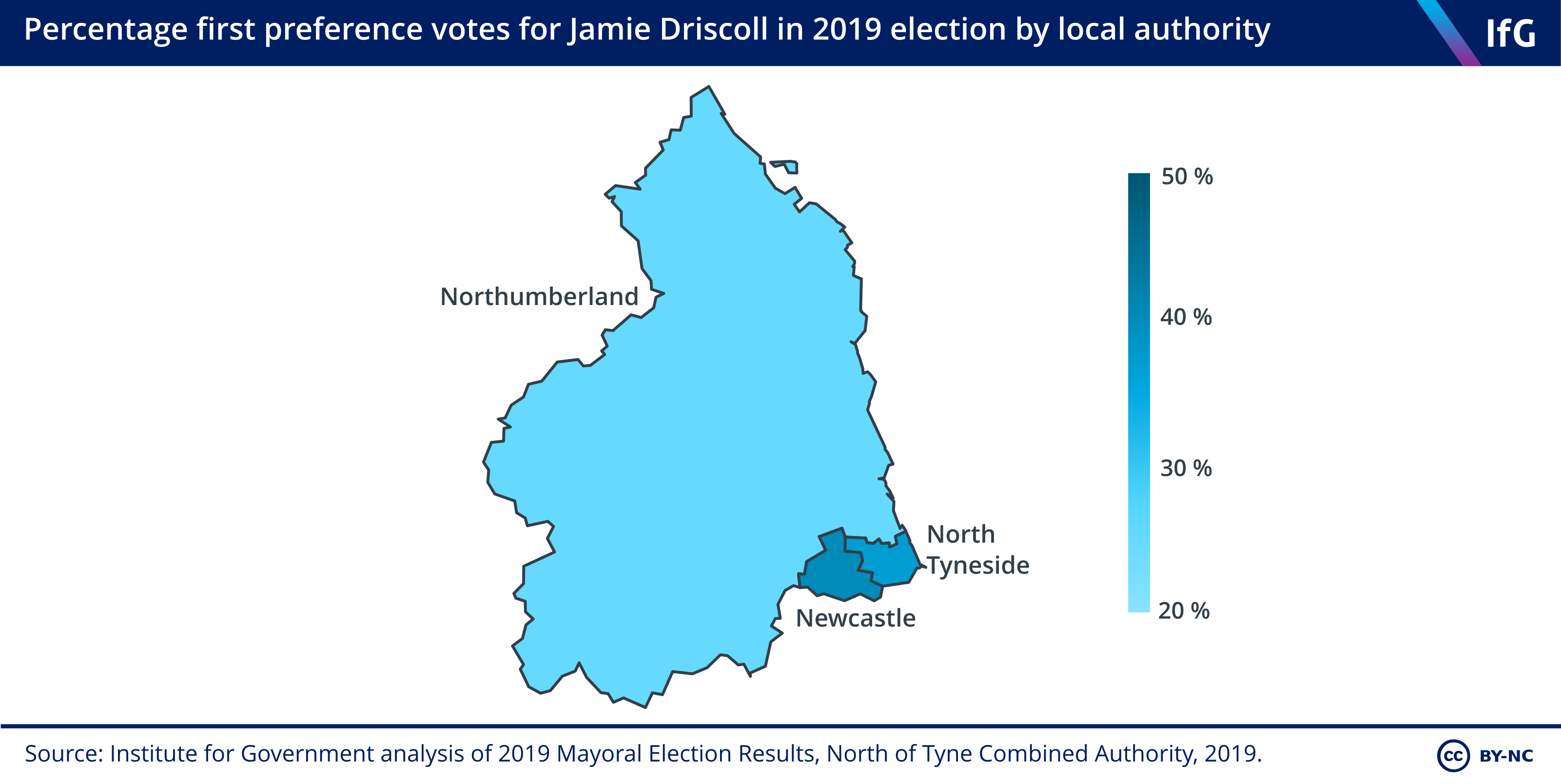 What powers do the mayor and the NTCA hold?

The main powers and responsibilities of the NTCA and metro mayor are focused on economic functions, including skills, housing and regeneration.

Unlike other MCAs, the NTCA does not hold powers or funding related to transport. This instead falls to the statutory North East Joint Committee, for both the NTCA and NECA areas.[2]

The NTCA is responsible for the region’s £23m 19+ adult education budget.[3] The authority also works with the North East LEP to deliver other skills and business support programmes.

The mayor has the power to undertake compulsory purchase orders and to create mayoral development corporations to support economic regeneration. For both these powers, the mayor requires the consent of the constituent authority where the site is situated. The mayor can also set a mayoral council tax precept, although has not done so. Since 2022, the combined authority has also had statutory borrowing powers.

Most NTCA cabinet decisions must be approved by a simple majority and the mayor does not have a veto.[4] The mayor proposes the NTCA’s budget, but the cabinet can amend this if two-thirds of voting members agree.

What is the NTCA’s budget?

The budget of the NTCA in 2020/21 was £234m, or around £280 per capita. Most of the funding (69%) takes the form of central government grants. The transport levy is paid by constituent local authorities and accounts for a further 14% of income.

The NTCA also receives income from tunnel tolls under the Tyne, and received some EU structural funds – it will be the lead authority managing the region’s allocation of the UK Shared Prosperity Fund, which will gradually replace these in 2022–25.

The NTCA’s devolution deal allocated an investment fund worth £600m over 30 years. This is delivered through annual payments of £20m, subject to five-yearly reviews by the Treasury. In per capita terms, this is the most generous of any of the investment fund allocations for combined authorities as part of devolution deals. 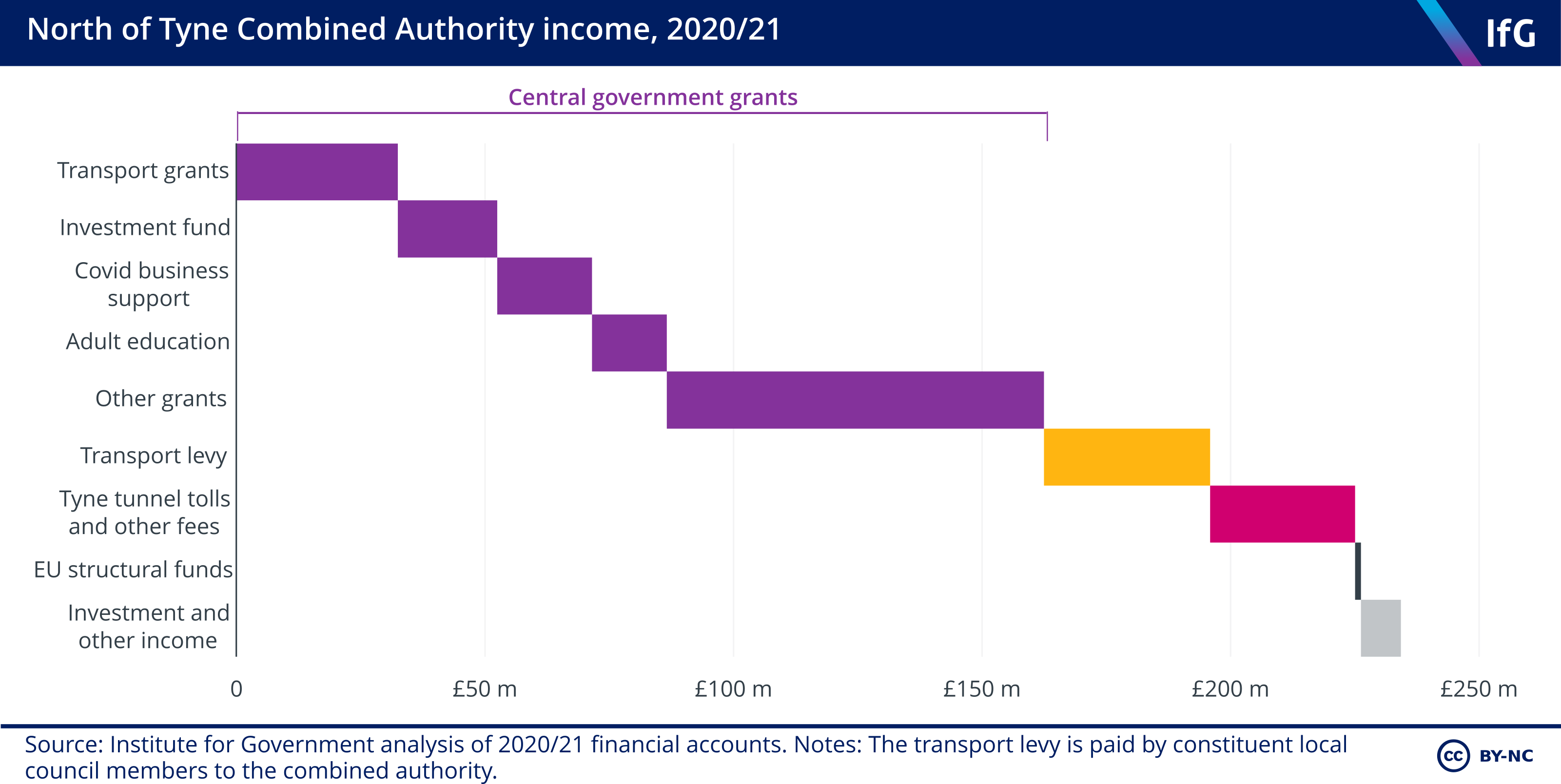 The NTCA currently does not raise any revenue from local taxes and the mayor has said he has no plans to introduce a mayoral precept. By contrast, council tax and business rates account on average for 20% of revenue of the constituent local authorities that make up the combined authority. 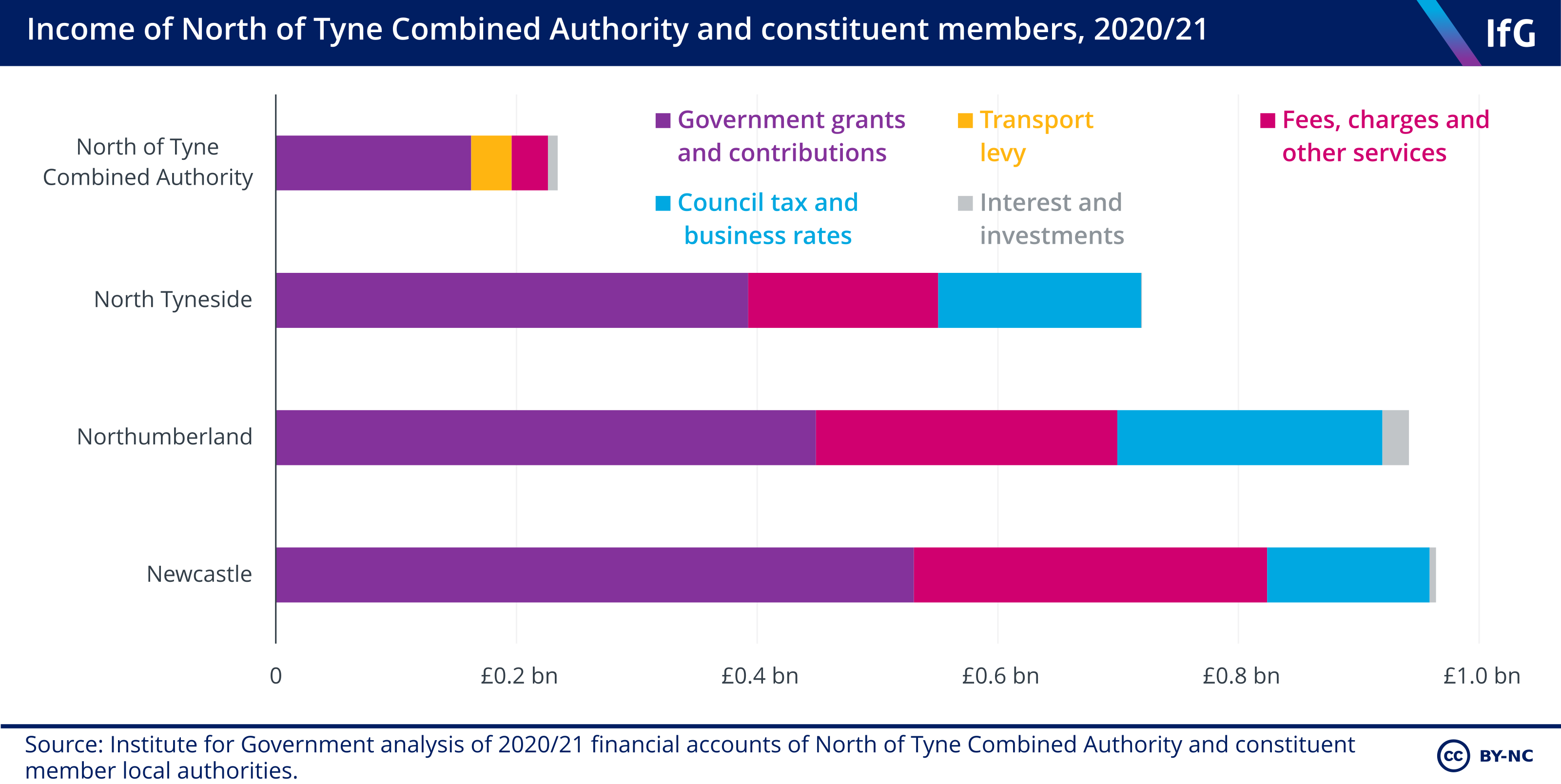 How does the NTCA compare to the rest of the UK in terms of social and economic outcomes?

The North of Tyne region underperforms in terms of core economic indicators such as productivity and household income, at 84% and 87% of the UK average. The area is also below average in terms of the employment and skills, although Newcastle is above the UK mean.

Newcastle is also much less car-dependent than the rest of the UK, with a disproportionate share of the population commuting by public transport. The largely rural Northumberland region is more car-dependent, as well as scoring lower in terms of social mobility and skills. 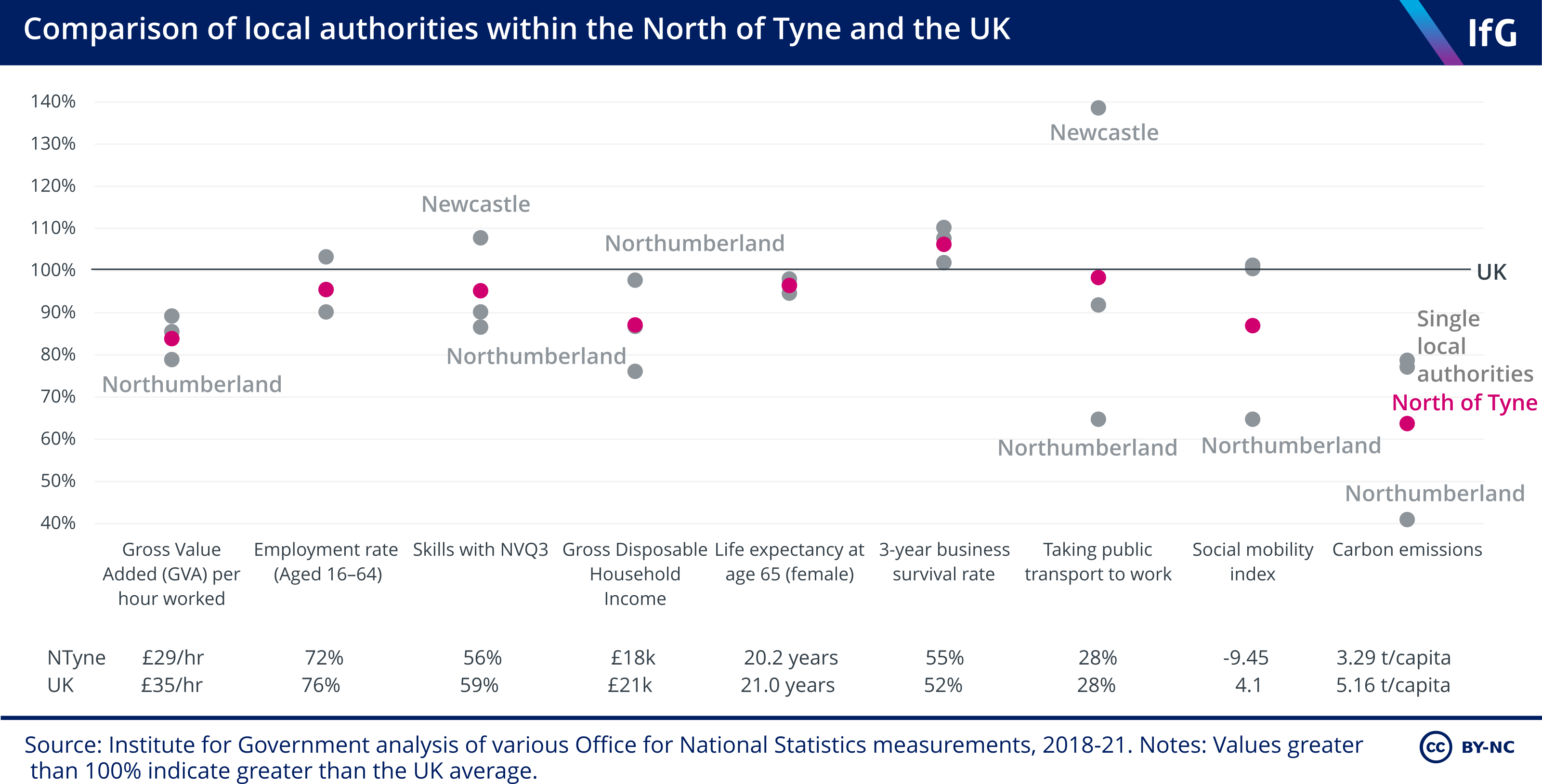 Comparison of local authorities within the North of Tyne and the UK (Updated: 23 May 2022)

How does the NTCA area overlap with other administrative boundaries?

Compared to some MCA regions, the NTCA does not align well with other local administrative boundaries. For example, its area is not coterminous with the North East LEP, which encompasses the area covered by NTCA and NECA local authorities. It is also not coterminous with the Northumbria police force area, which covers the NTCA constituent authorities as well as Gateshead, South Tyneside and Sunderland.

The NTCA also covers only part of the Tyne & Wear public transport network, which is the main reason why transport powers have not been devolved to the mayor.

The NTCA region is covered by one NHS sustainability and transformation partnership (STP): the Northumberland, Tyne and Wear and North Durham STP. However, this STP is not coterminous with the NTCA either, since it also includes the area covered by Gateshead, South Tyneside and Sunderland councils.